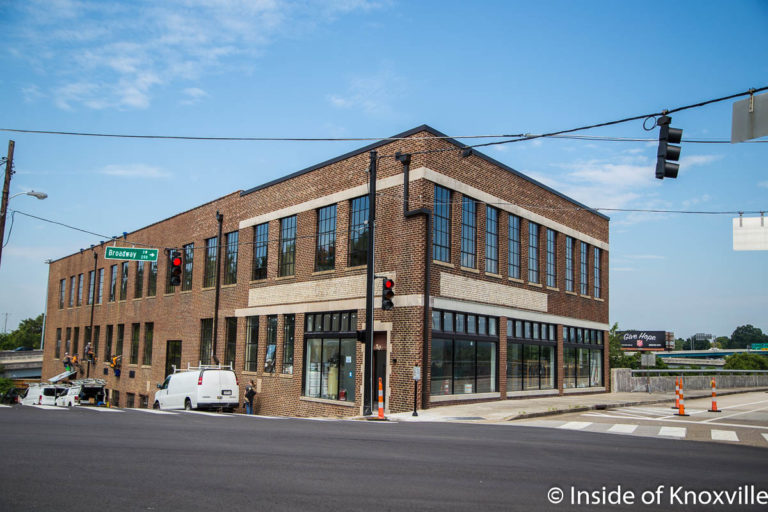 Hopefully, word is spreading about the Knoxville History Project‘s fine work. From publications, to talks and downtown art wraps, their work is visible in multiple directions. They were recognized for their most recent publication, Knoxville’s National Cemetery: A Short History. Jack Neely, with the help of Paul James, tells the interesting story of the local cemetery and was made possible by, “a grant from the U.S. Department of Veterans Affairs’ Veterans Legacy Program through the University of Tennessee.”

An interesting area development, the Keener Lighting Building at 701 World’s Fair Park Drive (on Broadway across from Balter), built in 1929 by the Goodyear Tire and Rubber Company, is best known in recent years for its lighted showroom on Broadway. You can see before pictures in this article from August, 2017,  and the finished product in this article from August of this year. It’s a beautiful renovation which now serves as home to Lincoln Memorial Law School students and others.

Bob and Melynda Whetsel renovated and restored this 1913 Craftsman home at 1012 Gratz Street in Fourth and Gill. More and more homes continue to be brought back to life in this wonderful neighborhood, making it an ever-more vibrant community. The home was sold to a family and will now, hopefully, be loved and cared for for another generation. See more photos of the home and explore the most recent tour of homes in the neighborhood here and here.

The Press Room, which has opened in the completely restored and renovated 1923 Dewine Building on Lamar Street, is the project of Lori and Jim Klonaris along with Sanders Pace Architecture. It contains many of the historic architectural elements, including the massive steel truss structure. You can see before pictures and plans here and the stunning after-pictures here.

It’s also worth noting that two recent local improvement projects have won statewide awards from the American Council of Engineering, recently. The awards for excellence went to the Cumberland Avenue Corridor Project and the Old City Streetscapes Project on Jackson Avenue. They are each now eligible for national awards in their respective categories of “Special Projects,” and “Surveying and Mapping Technology.”

Congratulations to all the companies, city official and departments and individuals making Knoxville a better place.