Cormac McCarthy, A German Band and a Freshly Painted Wall 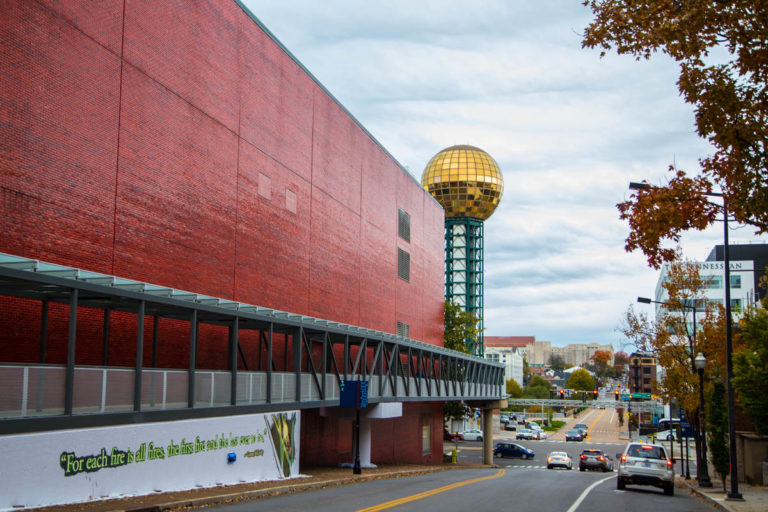 Many of us love both books and Knoxville. When the two merge in the form of Knoxville writers or writing about Knoxville, it’s a pretty heady intersection for someone like myself. Knoxville has lots of literary connections, none more celebrated than Cormac McCarthy, though he wasn’t the first to win a Pulitzer. That would be James Agee.

As for McCarthy, we’ve been, perhaps, a bit slow to recognize his literary contributions and their connection to our city. Thanks to Jack Neely, you’ll find a McCarthy quote in granite on Market Square. In recent years we’ve recognized his work Suttree and its main character, Cornelius Suttree, with an eponymous bar on Gay Street and a park on the south side of the river.

Last week UT hosted McCarthyFest, a two day focus on the author and his work. If you suspect it included McCarthy authorities, panel discussions and public readings, you’d be correct. It’s part of a series sponsored by the University of Tennessee Department of English and, while it included the conventional components of an academic event, it ended quite differently.

The culminating event was a performance last Friday night at the Bijou. It came and went from my intentions mostly because until I saw it, I couldn’t really comprehend exactly how the event would go down. Staged at the Bijou, I knew it involved a German band, Buddy and the Huddle, so named after Cornelius Suttree’s nickname and his favorite bar. The location of the bar is within sight of the Bijou, in a building which still exists (read about it here).

After enjoying a fire pit and friends outside at the Old City Gardens, I walked to the Bijou to meet another friend for a drink and to warm up before the show. At showtime, I slipped inside to hear the introduction of the band by Jack Neely of the Knoxville History Project.

As I learned, the story began when two German musicians traveled to Knoxville in 1996, simply because they were so taken with Suttree and wanted to see the city so eloquently described in the book. Roland Kopp and Michael Stroll tramped around the city looking for spots mentioned in the book, Kopp taking photographs on his “antique box camera.” The two also recorded music at Underground Studios in South Knoxville, as well as other locations around the Old City.

Back home, the assembled the band and continued to work on the recordings that became “Music for a Still Undone Movie, Maybe Called ‘Suttree.'” Twenty years and a lot of other music later, the group returned to east Tennessee to play some of the music from the album for a performance that included film footage from the era of the book. The footage was compiled by Eric Dawson and the Knox County Public Library’s TAMIS and incorporated some of the images taken on that trip twenty years ago.

The result of the pairing of footage and musical performance was stunning. First performed at the Nuremberg Film House in October, the group then replicated that performance at Atlanta’s Synchronicity Theatre before coming to Knoxville for the performance here. I’m not sure why my expectations were low — Would this be a bad German version of bluegrass? — but I found myself emerged in the wide-ranging sounds of the band.

It’s hard to describe the music beyond simply saying that it covered much of the spectrum from American music to classical passages, with healthy doses of ambient sound which fit the footage perfectly. I’m told it will eventually be posted to Youtube and I’ll watch for that. I’d love for more people to see and hear it. I felt as if I’d stumbled into a Big Ears performance.

Afterward, I re-joined my friend at the Bistro at the Bijou for some dinner, drinks and Will Boyd playing jazz. Buddy and the Huddle soon filtered in and assumed a large table in front of Will’s combo. As the fun evening drifted onward, the inevitable happened with some of the German musicians joining the jazz band for several excellent trans-Atlantic jams. With a room full of many of my favorite people from around the city, great music and a cross-cultural collision, the night shimmered.

With all that still in mind, I was delighted this week to discover an emerging mural along the support for the pedestrian bridge across Henley Street along Clinch. The mural centers on a quote by Cormac McCarthy, “For each fire is all fires, the first fire and the last ever to be.” It’s just outside the UT Conference Center. I’m delighted to see another literary quote displayed. It reminded me of the Wendell Berry quote I photographed years ago on the Southeastern Glass window.

I love the idea of our visitors knowing about Knoxville’s literary connections. It adds a layer of interest and could even inspire travelers from around the world, say Germany, to travel here. But it’s not just outsiders. Many of us know little about our own literary heritage and all of us could certainly learn more.

Literary Knox is one place you can start your exploration. Their website offers a literary map of Knoxville from which you could do your own exploration. Another option is taking a literary tour. Laura Still of Knoxville Walking Tours offers a range of tours including a Literary Heritage Tour. Check it out. And take a stroll over on Clinch to see our latest literary statement piece.