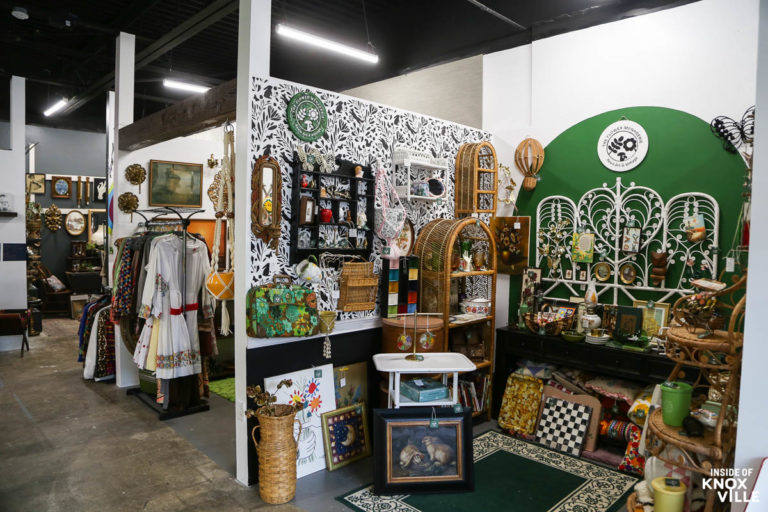 A new venture opens today in south Knoxville, as Carly Baskette presents Mood Ring Vintage. Twenty-one vendors offer their wares with merchandise from the 1950s through the 1990s. The opening continues a string of new business announcements south of the river.

Carly is from Fall Branch, near the tri-cities area in upper east Tennessee. She moved to Knoxville in 2006 to attend UT. Though she remained in Knoxville, she completed her degree in Marketing Management online through ETSU.

She worked for Regal Theaters from 2009 through last October, starting out at the Riviera and moving into the corporate office in 2014. She worked in Marketing after finishing her degree.

She said she’s always loved vintage. “My mom used to have a booth in an antique mall. We used to yard sale every weekend, so I’ve always had a love for that.” She recalls that her mother didn’t have a great experience with her booth, which was on a second floor of an unairconditioned antique mall. Her mother encouraged her to never follow in her footsteps. Then came the pandemic.

She was furloughed without pay from Regal for fourteen months. While she collected unemployment, she began to go to estate sales “to kill some time.” It gave her the itch again. She said she didn’t need all the things that she loved and was buying, so she felt she should give others the chance to enjoy the items.

She got a booth at Retrospect in January 2021. “I’m a pandemic dealer. That’s what they call us. It was gangbusters. I wish I’d done it sooner . . . I was able to sell a lot of cool, funky retro items and clothing . . . I decided I wanted to expand that.”

She said she really loved working for Regal, but the furlough offered her a chance to evaluate her situation. She concluded she could really only rely on herself and that’s when she decided self-employment was for her. After a brief return to the company, she decided to venture out on her own.

She said she met a lot of other dealers during that furlough, including other pandemic dealers and some long-term sellers. “I decided that I wanted to do something that was my own vision . . . I knew a lot of my friends didn’t have the opportunity to have a booth.” She decided to be the person that gave them that chance.

When the property at 906 Sevier Avenue came open she went for it immediately. The former Selfie Lab already had booth structures that would be perfect for displaying the vintage goods that would soon fill them. She was inundated with people who wanted a space, ultimately including twenty other vendors and a booth for herself. She gets a small percentage of sales and they all have the chance to own an independent business.

Even with so many vendors and tons of vintage goods, the space does not feel cramped and the items are easy to look through. “I think the fact that we’ve had all month to get ready has allowed everyone to really curate their space and decorate it to their own taste.” She said she simply reached out to people she felt would be a good fit and word began to filter out. She has a twenty-two person waiting list.

The range of items is large, but she said one vendor has furniture. She has lots of clothing, particularly the 70s through the 90s. You’ll also find vintage Vols wear, artwork, and home décor. Clothing has become a theme through a number of booths and virtually none of it is “modern.”

She emphasized that vintage shopping offers a good sustainable way to shop, whether for Christmas gifts or for your wardrobe. “You’ll find one-of-a-kind items here that no one else is going to have and keep it from ending up in a landfill. I think that’s important.”

They open today, but they will have a grand opening on Friday, November 4, from 6:00 to 8:00. There will be a “six-foot long charcuterie board,” and wine. Regular hours will be 12:00 pm to 6:00 pm, seven days a week and you can follow along on Instagram and Facebook.