The Press Room Set to Open in the DeWine Building 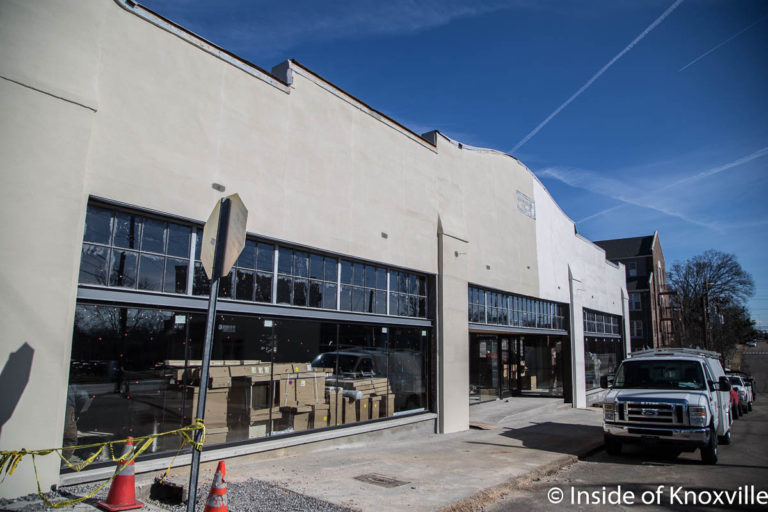 I don’t remember when a building has generated so many inquiries from readers before an article was posted. Sitting at the corner of Lamar and Broadway, just across the street and down a bit from Elkmont Exchange, it’s a prominent location which has seen intense interest from developers in recent months. It also may simply be that the striking building shows so much potential for development.

In any case, I was pleased to hear from Kaley Hyatt, Director of Events and Catering for Cafe 4, The Square Room and for the umbrella management company, Spaces in the City. She told me, “We started Spaces in the City about two years ago, when we had maxed out our current event capabilities in The Square Room. Now, two years later, we are getting ready to open our newest venue, The Press Room.”

I met Kaley, along with Lori Klonaris (co-owner of Cafe Four, Spaces in the City and the Press Room along with her husband Jim) for a look around the building and nascent event center. As you can see from the before photographs, it has come a long way. While still under construction, the space is nearing completion and with a first booking already set for March 3 and a grand opening March 9, the final touches will happen quickly.

In addition to an attractive facade, the building and its adjacent extension offers a flexible entertainment and event space with multiple configurations for a range of possible uses. The main floor is around 10,000 square feet – similar to the Mill and Mine. The steel span construction allows for uninterrupted sight lines and makes the building more attractive for events. The space can accommodate a 600 seat dinner (or 450 with a dance floor). A thousand lights (see the night photograph) illuminate the original ceiling of the main space making for a magical ambiance.

There are also more intimate spaces built into the larger project. A small, private loft suspended above the main floor not only offers the best views of the venue, but can also host smaller events such as corporate dinners and can accommodate up to 50 people. A small outdoor courtyard may also be booked for events.

A full commercial kitchen will be used for the catering business and for catering events on site. The kitchen also includes a double door for loading catering vans. A fully stocked bar is also located in a side space and is available for events. A private bridal suite with built-in make up tables makes the venue an easy location for a wedding and the reception afterward.

The space wasn’t so attractive when the couple made their initial purchase. The interior was divided into four sections by cinder block and was full to the drop ceiling with accumulated junk. Once the junk was removed and two drop ceilings were taken out, the barrel ceiling was exposed, the two realized the potential hidden in the building.

Originally purchasing the building for an off-site kitchen and planning to use the remaining space as a storage facility, the couple realized the building could be much more. The cool extension, designed by Sanders Pace, once a blue building covered in graffiti, is also coming to life with a new facade, a courtyard facing Lamar, which will be tree-lined and beautifully landscaped.

The history of the building is not completely known, but the inscription on the front, “DeWine Building, July 1, 1925,” yields some clues. I spoke to Jack Neely of the Knoxville History Project, who said he hadn’t researched the building, but said,

The Dewine name is especially interesting. It was an Irish Catholic family, the best-known member of which was Daniel Dewine, who was a partner with Patrick Sullivan in the latter days of that saloon. He also ran a brewpub–“Dan and Pat’s”–near what’s now Willow, notable for the fact that it had a trap door that opened directly into First Creek. Useful for cleaning up after fights.

Years later, Dewine used his saloon earnings to buy land, and used that land to help establish St. Mary’s Hospital, named sort of in honor of his daughter, who had died young. He was old and retired by 1925, so I suspect that building was associated with a younger relative.

Lori Klonaris said she understands that possibly Knoxville’s first bowling alley was located in the space, which was also a car dealership at one point. More recently, it was a print shop, Knoxville Printers, hence the name, Press Room, for the new venture.

In addition to the full kitchen in the basement, a warming kitchen is located upstairs, but out-of-sight of the venue and is designed for ease of service. Plans include a small patio to the rear of the building, as well as the Printer’s Lounge area around the bar – a spot that could also be booked for smaller events. The front and rear of the building can be opened to allow flow from the rear patio, through the lounge and out to the front courtyard. A mixologist will be on staff and personalized cocktails for the bride and groom will be offered as a special service. Beer will also be offered on tap for events.

Brownlee Construction is handling the build-out and Sanders Pace Architecture did the design work. Justin Paulk is doing his cement magic for sinks and counter-tops. The public is invited to the March 9 Grand Opening to check out the space. If you are interested in booking an event, contact them via the Spaces in the City webpage, email them at info@spacesinthecity.com or call them at 865.544.4199.