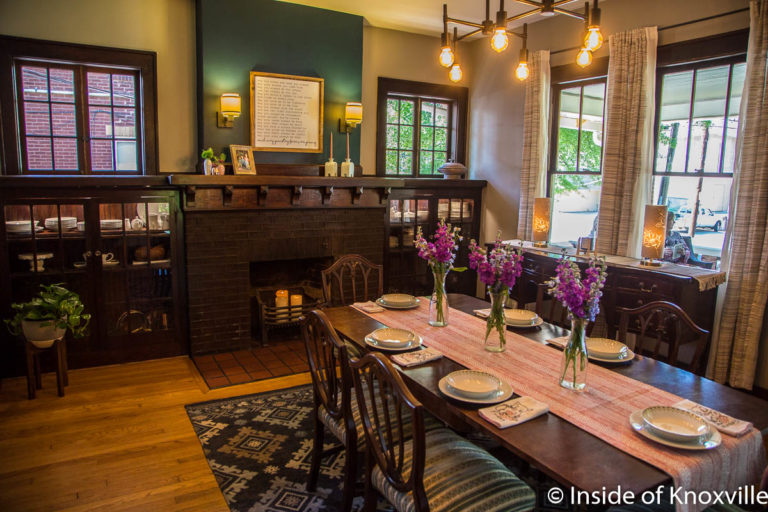 In case you missed it, here is part one.

We continued our tour at 1219 Luttrell Street, the home of another friend, Brett Burdick. The 1921 Craftsman home was originally occupied by the Wright family for its first ten years, but it was the Burnett Family that stayed the longest, first moving in in 1931. Cecil Burnett,”ran Burnett’s Little Store, a snack bar and sundries store on Clinch Avenue downtown for twenty years.” Marie, daughter of the Burnetts owned the home until 2004 when it was sold to the current owner.

What is so impressive about this home is the woodwork throughout the home, including both original and constructed by the owner. Much of the cabinetry and other touches were constructed in his workshop, while evidence of his interest in inventions, such as a 3-D printer and a photograph of the Hedgehog Featherboard, his latest invention, also dot the house.

108 East Glenwood sits on the northern edge of the neighborhood. Albert and Caroline Heins built the home in 1924 on property they bought from the owner of Greystone Mansion. Albert started A.G. Heins Company in 1920 and, four generations later, the company still operates just off Blackstock, near downtown. Albert lived in the home for over sixty years.

We didn’t make it past the porch before we fell in love with the house. Each end of the porch has comfortable spaces to relax and enjoy the great weather. But every room throughout the home is beautiful, warm and welcoming. The dining room, with built-in cabinets on each side of the fire place (original), was particularly beautiful, but the breakfast nook, kitchen, back yard and original glass paned doors throughout (also original) all sparkled. Current owners have completed a beautiful upstairs master bedroom.

The home at 1109 Eleanor Street was constructed in 1917. The home has architectural and historic significance that goes beyond its Craftsman walls, as it was built by Earl and Fred Worsham, who also built iconic Knoxville buildings such as “the Andrew Johnson Hotel, Church Street United Methodist Church and the Medical Arts Building.”

The home has been lovingly renovated by the current owners, who purchased the home just last year. Highlight definitely included the beautiful shower and the perfectly stunning kitchen. And check out the gorgeous floors.

The final home on the tour, at 941 Eleanor Street, was constructed in 1905. Home to friend and former chair of the Knox County Board of Education, Indya Kincannon, I’d toured it before, but it is simply one of the most beautiful and interesting homes in a neighborhood full of them. Again, it’s the lovely oak woodwork throughout that makes it such a showplace. starting with the transom windows on the front and flowing to the massive pocket doors to either side of the main hallway with an inlaid wood floor in the foyer.

The stairwell is one of many spectacular features, as well as the built-in china cabinet in the dining room and its accompanying fireplace. A tenant occupies the top floor with a great view of the lush tree-lined street and a perfect space for one person. It’s hard to pick a favorite on the tour, but this would be a candidate for many people, I’m sure.

Let me thank Arin Street, again, for his tireless work gathering the history of these homes and making the tour far more interesting and informative for it and without whose work, these article would feature pretty pictures and me repetitively articulating great thoughts like, “it was really cool.”

Also, thanks to everyone who opened their homes for the tour and to everyone who, through hard work and a lot of money, has made this neighborhood so special. Your work should make us all look at older homes, though they may be in poor condition, with a different eye toward their story and potential.