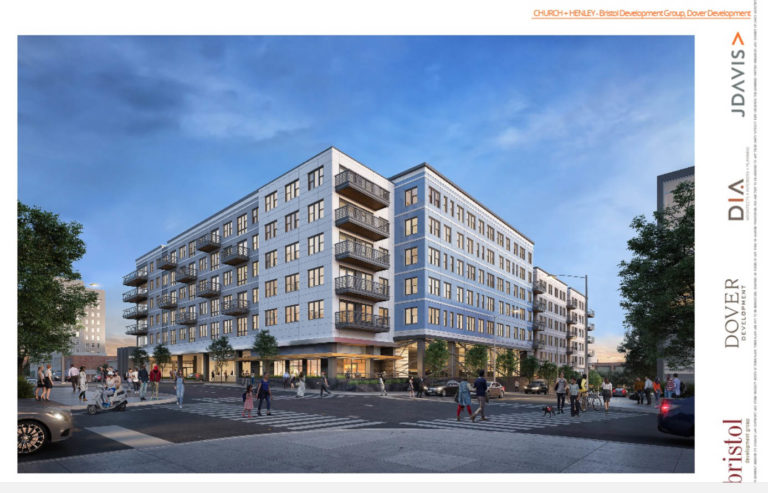 Rick Dover, DIA Architects, J Davis Architects and Bristol Development Group recently presented their current vision for the Supreme Court Site on the downtown block bounded by Henley, Church, Locust and Cumberland to City Council in a workshop. The entire city block project is pivotal to downtown development as it has the potential to connect downtown to the Convention Center and beyond, to stretch downtown residential and retail parameters and to engage and begin to reshape Henley Street.

The original proposal by Rick Dover was accepted by the city in December 2016. You can see my summary of that plan and a link to the full plan in my article from just over a year ago. Part of that agreement was that conceptual designs would be submitted for discussion by April of this year with a deadline of December of this year for the plans to be accepted by the city in order for the project to move forward. This was a meeting to discuss that submission. The agreement further states that construction must begin by the end of 2019 and it should be completed by 2022.

There are differences between the original plan and this plan as submitted (it could further evolve), but the general plan of a hotel, apartments, a restaurant and retail have generally remained consistent. Limitations of traffic flow and access to Henley have been factors in the changes. There are currently two access points from the site to Henley and when the developers inquired to TDOT about shifting those, they were told that not only could they not shift them, they could not use them. It’s the kind of significant change that impacts a design and can’t be known until the project has advanced past a proposal stage.

Other changes since the first proposal that have impact its current formulation include the fact that the Aloft Hotel planned for the site is no longer a consideration given subsequent acquisitions in the hotel industry. There has also been an explosion of constructed and announced hotel projects in the time since the proposal was submitted. While a hotel continues to be a part of the proposal, it will likely be a boutique hotel. Room numbers for that portion of the project have been reduced from 170 to 100.

The marble portion of the Supreme Court building will be preserved as a restaurant and bar and roof access is planned for that structure at the corner of Cumberland and Locust. The number of apartments proposed has gotten more specific, from “over 200,” initially to 230 at this time. Parking has been shifted downward slightly from 425 to “right at 400.” The ratio of bedrooms to parking is about 1:.95.

One of the charges from the city was for the project to activate Henley rather than turning its back to the street, as is now the case for nearly all other buildings on the corridor. The developers feel there is no feasible way to justify retail on that side, but they’ve added windows along that side at street level showing the amenities for the hotel guests and apartment residents, including a fitness center, “24/7 coffee shop,” bike shop (for residents and guests) and a pet spa.

As with other similar developments, this one will include an internal public space over the parking which will include shared amenities such as a pool and outdoor kitchens. Many units will also have balconies which offer outdoor space and are designed to give the facade of the building more interest. The facade is currently slated to be constructed of brick and steel at street level, with stucco above.

Downtown is evolving, so it could shift, but at this time they are looking at rates of roughly $2 per square foot in rent, which they said is similar to other nearby projects. As an example, they offered that a 800 square foot apartment would run $1600 to $1700.