Fourth and Gill Tour of Homes 2018, Part One 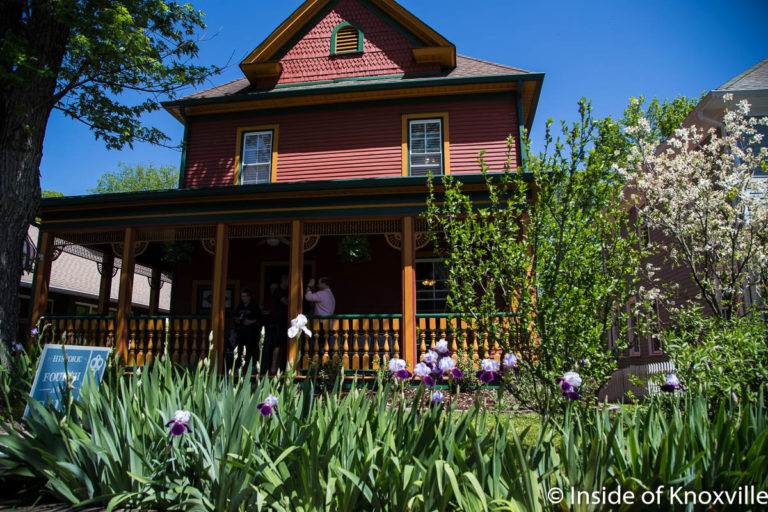 It would appear we’ve earned some good karma in weather world. Another major annual event, the Fourth and Gill Tour of Homes, featured just about perfect weather. A year ago, it was definitely not the case and there isn’t a better neighborhood in Knoxville to walk through on a pretty spring day.

On a personal level, I did the tour last year with Urban Brother who dreamed of moving to the city. This year we did the tour together three days after he moved to the neighborhood, so it added a measure of fun to the day. He got to meet new neighbors and I got to talk with so many people I really enjoy. It’s that kind of place.

We started our tour by skipping Central United Methodist as it has been on the tour a number of times and I’ve enjoyed it before. It’s an attractive space worth seeing, if you’ve not seen it before. We started our tour at the second stop, the Frank and Julia Bucher House at 722 Luttrell Street.

Built in 1909, the Queen Anne cottage was first home to Julia, a teacher who taught at what is now Brownlow Lofts and her husband, Frank, who became deputy sheriff. The home was later divided into two apartments. More recently, the current owner bought the home in 1990 and has beautifully renovated it. A built-in china cabinet, antique organ and cleverly re-imagined use of attic space were eye-catching features.

800 Luttrell Street is home to the former First Seventh Day Adventist Church, built in 1929 on the site of the former Friends Church. It is now home to a number of creative people, including artists using a range of mediums in the lower level, Open Door Architecture upstairs and photographer Charlie Brooks. Wood artist, and friend, Gordon Coker displayed his woodwork there for the tour.

The home at 910 Luttrell Street, built in 1908, was first home to Reverend Thompson Ashburn and his wife, Mattie. They moved from the home in 1919 and in 1951, the home was divided into three apartments. Arin Streeter who writes the excellent history for the tour and from which all this material was gathered, notes that, “by 1958, the nineteen houses that make up the 900 block of Luttrell Street had been divided into no fewer than 55 apartments . . .”

The current owners bought the home in 2016 and recently renovated the kitchen. Standout spots in the home run similar to many in the neighborhood: the kitchen, the stairwell and the beautiful fireplaces.

Our fourth stop, at 1012 Gratz, revealed a home renovation in progress. Bob Whetsel, who many readers may know as the retired Director of City Redevelopment for the city of Knoxville, purchased the home in 2012 and it represents his latest project. Given his track record, I told him we’d wait to see if that is the case. The home is being lovingly made into a beautiful showcase.

The home was built in 1915 by John and Nellie Campbell, “who moved in with their eight children, plus Nellie’s brother Michael Fitzgerald, for a total of eleven occupants. Some portion of the family remained in the home for 73 years. Large, open rooms and a beautiful kitchen set the home apart.

Our fifth stop, and the final home we’ll examine in part one, located at 1104 Luttrell Street, was constructed in 1915. Like so many of the homes in the neighborhood, the street frontage is very deceptive, with a much larger interior than a passerby might expect. It’s also amazingly beautiful throughout.

Built by men’s clothiers J.W. Sullivan and W.H. Underwood, the home’s, “longest residents were George and Blanche Boudreau, who bought the house in 1946 soon after being married.” George died in 1995 and Blanche sold the house in 2006. Jeff Talman is the current owner and has completely renovated the interior in beautiful fashion. The home will soon be on the market as he moves on to new homes to renovate and revitalize.