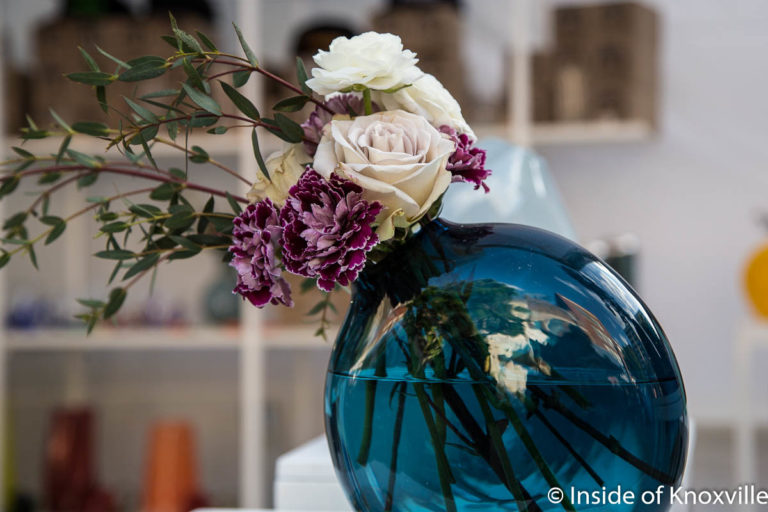 Downtown Knoxville was caught up in Dogwood Arts Festival fever from Friday morning into the evening on Sunday. Crowds built slowly through the day on Friday and by Friday night thousands had joined the fun. Saturday and Sunday, with pitch perfect weather, drew massive crowds to the culminating spring Dogwood Arts event.

Artists filled Market Square and Krutch Park Extension, while food vendors lined Market Street beside the park and Clinch from the park across Market and a bit further west. A children’s area filled the block of Market behind the Museum of East Tennessee History.

Pottery seemed, to me, to dominate the artisans, though there were many mediums represented. And much of the pottery was extremely beautiful. A good bit of jewelry, as well as photography and more was also available. Urban Woman snagged a couple of Christmas gifts she felt good about. It really is a great place to shop for gifts, given the unique nature of the items available.

One of our favorite booths was that of ReAcoustic. From small wooden boxes with a sound hole and a slot to hold an ipod, to larger boxes topped by the flaring end of various brass instruments or the horns from old phonographs. The amplified effect was striking and the vendor said he did very well.

The stage was filled with a stream of entertainers. Urban Brother and I enjoyed the Singing Seniors from the O’Connor Center. Urban Woman and I enjoyed brunch at Uncorked on Sunday morning to the sounds of Tanasi Winds and Osborne/Krause. Other entertainers were sprinkled about and it was hard to tell who was simply busking and who was part of the festival, though it really didn’t matter. We enjoyed the fire juggling, but weren’t sure if it was connected or random.

The children’s area had a number of features you’d expect, with a few twists. Dan and Cindy’s Mid-Day Merry-go-Round was fun, with a live person (usually Dan or Cindy) actually having to pedal a bicycle to power the ride. A large cardboard structure for children to play in made perfect sense to all of us who have given expensive presents to children and grandchildren only to watch them play the rest of the afternoon with the box. One World Circus also performed in the area and did an excellent job.

So, it was another successful year. The festival continues to grow and evolve, losing some parts and gaining others, hopefully keeping the best parts and culling any that are less successful. What do you love about the festival? What do you miss from the past or feel should simply be added to make it even better? Leave suggestions in the comments and, I suspect, they will be noted by the right people.

Here’s to many more years of the Dogwood Arts Festival – and catch your breath, because the activities just keep on rolling, with several major ongoing events returning in May, like the Market Square Farmers’ Market, which starts next week and Jazz Tuesdays which start officially the following week. And let’s hope we’re on a good-weather roll.