A Look Inside the Keener Lighting Building + Future Plans 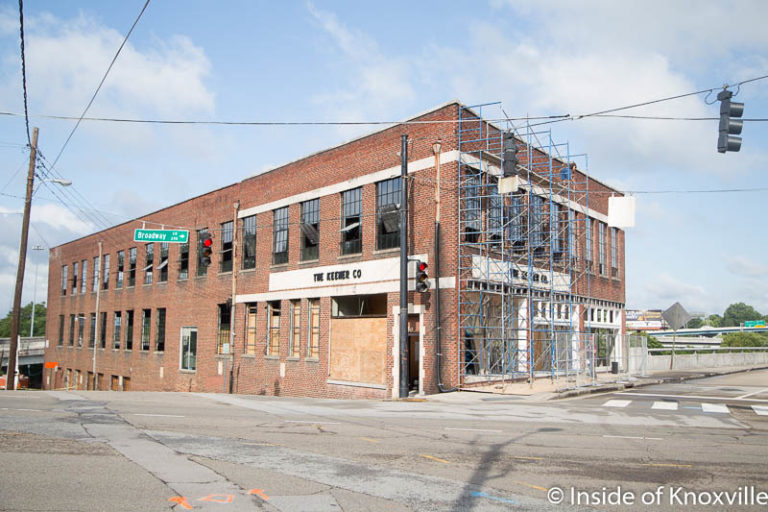 A reader joked the other day that I must get tired of writing about one building and being asked about ten more. I don’t, really, but it is hard to keep up with all the construction and various projects underway around downtown. Still, I find it a pleasure to climb through old buildings, learn about their history and their future and bring it to each of you.

One of the persistent questions for the last year or more has been, “What’s going on at the Keener Lighting Building?” And for that, I’ve finally got some answers. Mark Heinz gave me a tour of the building and a glimpse of future plans. The building is owned and being redeveloped by Dewhirst Properties.

The building, located directly across Broadway from Balter Brewing and Southeastern Glass, was long the home of Keener Lighting. The front included a showroom, offices sat behind that and the bulk of the building was warehouse space. Incredibly (to me, at least), it has been closed over three years now. When I reported the closure, I noted the business had been at that location for forty-one years. The owner of Keener Lighting said he thought it originally housed a Firestone franchise.

The 1920s building is quite large, including about ten thousand square feet each in the basement, ground floor and upstairs. An old freight elevator connects the three floors, but cannot be salvaged as a part of the reuse of the building. Extensive damage also had to be remediated on the facade facing Broadway.

A line of stone had long since crumbled (it was covered over in the photographs I took three years ago), and that is being restored. Part of the wall is currently bowing and will have to be rebuilt. The transoms were rotten. The roof is an arched roof and the parapet surrounding the edge has captured water at one corner doing extensive damage there. The rear windows of the building had been covered in cement block which has now been removed.

With Whitney Manahan acting as lead architect, Dewhirst Properties is working in conjunction with the LMU Duncan Law School to provide student housing for the prospective lawyers. LMU has a bit over 300 students in the three year program and first preference will be given to seniors starting next August, when the building is expected to open. If LMU students do not take all the units, the remainder will be offered at market price to the public.

The school felt a need for parking and for nearby housing and has already begun use of the parking area behind the building. Having a significant number of students within walking distance will reduce the strain on the limited parking they have available on the hill.

The building, when it is complete will have thirty-three units and a single commercial space on the front. The apartments will include efficiency, one bedroom and a limited number of two bedrooms. Not particularly suitable for a restaurant or other use, the commercial space may also be used by the university.

It’s similar to the Electric Company Loft building in some respects. Construction is concrete and steel. Interestingly, the second floor was poured as one giant slab of concrete. It’s cracked along the beams and Mark says that probably happened within the first couple of years after construction as the building settled. Those cracks are being filled, but present no structural issue.

The concrete construction will make for better sound-proofing for residents and the massive windows will provide great light for the homes. The primary entrance for residents will be on the back side of the building, though another entrance will be constructed off World’s Fair Park Drive. A corridor will extend the length of the building and two stairwells will provide mobility between floors. Ceiling will be very high and insulation will be put on the top of the roof.

When completed, it should look better than it has in at least a generation and an additional forty or so downtown residents will be added to the north side of downtown proper.