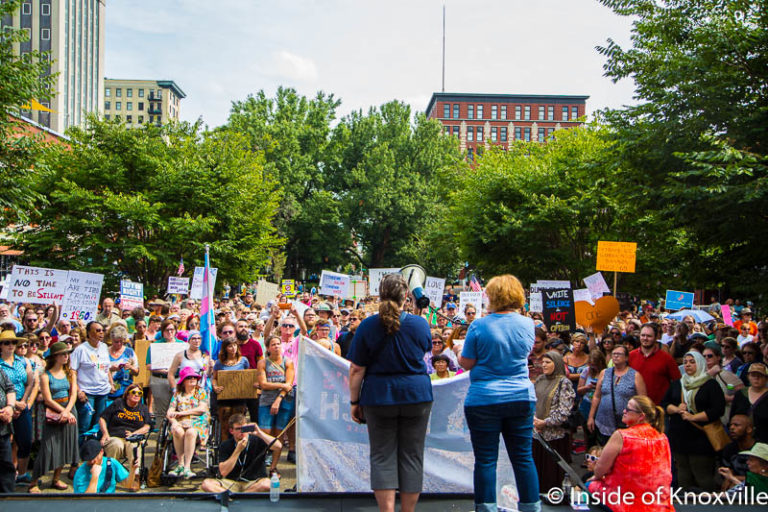 This past Sunday, in what has become an almost regular event, another rally was held on Market Square. The rally, organized literally overnight, was held in response to the white supremacist and white nationalist marches in Charlottesville, which culminated in the death of a young female counter-protester. The young man, a white nationalist from Nevada, responsible for driving his car through the crowd, killing one and injuring many, was arrested and charged with homicide.

Further, it has become a common refrain among certain groups when talking particularly about Black Lives Matter protesters: “Run Them Over.” Memes, saying things like, “All lives splatter, no one cares about your protest,” have been produced showing just that and, of course, car attacks are increasingly common among other terrorists, such as ISIS.

The alleged trigger for white nationalists to descend on Charlottesville was the impending removal of a statue of Robert E. Lee. Similar to debates over the display of the most known flag of the Confederacy, lines have been drawn regarding the removal of monuments between those “defending heritage,” and those denouncing the monuments as glamorizing our racist past.

Since many of the participants are not southern, it’s not likely they simply are paying homage to the south. Former KKK leader David Duke was there and said, “We are determined to take our country back,” Duke said from the rally, calling it a “turning point.” “We are going to fulfill the promises of Donald Trump. That’s what we believed in. That’s why we voted for Donald Trump, because he said he’s going to take our country back.”

As the white nationalists arrived in Charlottesville and their numbers grew, the sight was a chilling one for many Americans. We aren’t used to seeing heavily armed soldiers in our streets and we certainly haven’t been accustomed to seeing heavily armed civilian groups in our streets. Add torches to the angry gun-carrying group and the sight was alarming to most of us. They also displayed the Confederate flag and Nazi imagery, including swastikas.

In the aftermath of the white nationalist event in Charlottesville and the subsequent death, President Trump seemed to make a case for shared blame, saying there is fault on, “many sides.” After being criticized strongly for two days, he singled out white nationalists and others, but for many people, the damage was done. He had missed the moment and had, in the views of the hate groups, given them support by not calling them out initially. David Duke was furious when Trump toughened the statements a couple of days later.

And it appears this is only a beginning. White nationalist groups feel emboldened by the publicity and have begun planning additional events across the country. On the other side, the event may have hastened the demise of the various memorials as the murders of black church members by white supremacist and neo-Nazi sympathizer Dylann Roof hastened the end of South Carolina’s display of the Confederate flag.

In Tennessee, Governor Haslam has stated that the time has come to remove the bust of Nathan Bedford Forrest, one of the founders of the Ku Klux Klan, from the capitol where it is displayed. Interestingly, then presidential candidate Donald Trump supported removing the flag, “I think they should put it in the museum and let it go . . . Respect whatever it is you have to respect, because it was a point in time, and put it in a museum. But I would take it down. Yes.” This even though throughout the campaign the flag, sometimes embellished with his face at the center, was displayed often at his rallies.

So both sides are digging in. It’s really more of the same we’ve seen in the last decade and with white-hot intensity in the last year or two. We’ve become increasingly divided into angry camps, each attempting to shout more loudly than the other. It’s hard to spot anyone listening. It’s rare to find groups of people with differing opinions who are willing to even attempt civil conversation.

I can hardly watch television with the screaming and the attempts to catch the other “side” in a misstatement or blunder. Headlines are often misleading in order to alarm us more than the facts – which may indeed be bad – warrant. Memes simply make our side feel better. They don’t change minds, nor do they offer any context which might illuminate a more complete rendering of the situation.

What happens next? Is this who we are going to remain as a people? Are we happy with the current state of affairs? Do we even have an interest in finding common ground? Or do we simply continue to disintegrate into armed bands of opposing gangs on the street?

What is the America we believe in? Who are we? If we believe we are better than this, we better take action to prove it or we’ll simply be proven wrong. Sharing memes designed to incite or ridicule doesn’t help. Sitting at home steaming in your own anger doesn’t help. Consuming only the information from your, “side,” doesn’t help. Staying home on election day not only doesn’t help, it’s devastating to our democracy.

Dig deeper for the truth. Be willing to read an opposing article or listen to someone whose views are different from your own. Stop drowning in the same news outlets that always support your world view. Look for nuance. Very rarely is something or someone completely evil or completely virtuous. Try to form alliances with people whose views differ from your own on some topics but agree in other ways.

Attend local events designed to educate us all about issues in our city and beyond. Tomorrow at noon, Bob Booker will speak at the East Tennessee History Center about the experiences of black people in Knoxville from 1844 – 1974. Attend that or other events and learn about other people’s lives. Seek out people who differ from you racially, politically, ethnically and socio-economically. We are better when we connect.

Protests can serve useful purposes. They can bring together people of like mind who need the support they can offer each other. They can make a point to the larger community that significant numbers of people support or oppose actions or events. Elected officials are put on notice that constituents feel strongly about an issue. But they can only go so far. If we don’t stand up in our daily lives, if we don’t work to support candidates with our perspective and if we don’t vote, they become meaningless feel-good moments.

One thing did stand out to me as a glaring inaccuracy at the march. In between all the fine statements about supporting each other and standing up for the oppressed, a speaker said we must make it clear that “this,” meaning the neo-Nazi/white nationalist march will not and cannot happen in Knoxville. That is simply not true.

I know this because it has already happened. I’m often amazed when I bring it up and people have no memory of it. I’d only been writing this blog for two months in August 2010 when we had a large rally and march in Knoxville. Many of the participants were from out of town, wore Nazi attire, waved Confederate and Nazi flags and shouted slogans filled with anti-immigrant and anti-Jewish rhetoric. You can see the images and read the articles here and here. It happened seven years ago, yesterday.