Three Downtown Businesses Will Soon Be Forced to Relocate 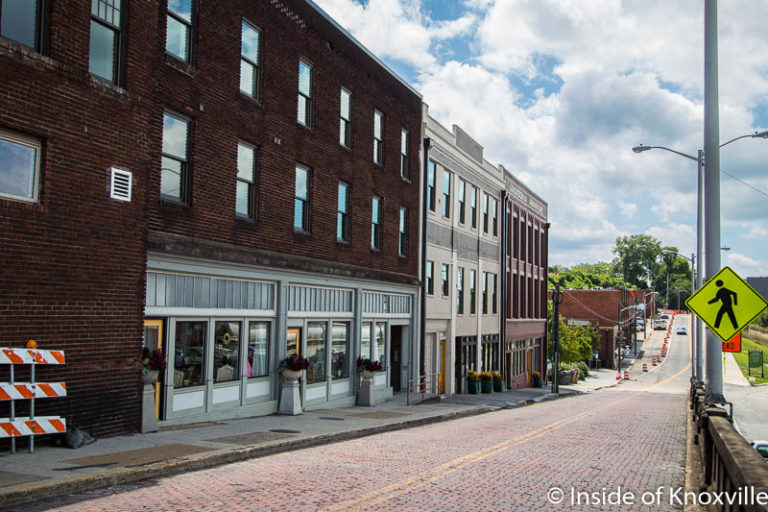 Businesses Along the Western Side of the Jackson Avenue Viaduct, Knoxville, August 2017

It’s a price of progress. While needed infrastructure tasks are completed which allow us to continue to grow, a price is sometimes paid. Jackson Avenue has been under re-construction and renovation for months and it’s been hard for the businesses and residents there. That looks nearly complete and it brings up the next infrastructure challenge: The Jackson Avenue Viaduct.

You know the one – the one with the brick ramps. It’s unique for our downtown and one of my favorite spots to ride my bike. Bouncing across the bricks I can pretend to be riding the cobbles in a small European town in the Tour de France. Actually, it scares me a bit, but I do think of those cobbles.

It was built at the same time the 100 block of Gay Street was elevated, in 1919. While the Gay Street Viaduct was replaced in 2005 and the structure under the 100 block was replaced just a few years later, the Jackson Avenue viaduct is the original. It has been given a “poor” rating by TDOT, which “qualified it for participation in the federal bridge replacement program.” This is from the city’s Jackson Avenue Projects site.

The timeline for its replacement has shifted a number of times over the years the project has been discussed, but Rick Emmett recently responded to a reader of this blog, who helpfully passed along the information, by saying, the RFP, “will probably occur later this year with construction beginning in the Spring.”

According to Rick, ” . . . this project is using State and Federal money so we had to have State and Federal historic review as well as environmental review. These processes and decisions pretty much tied our hands as to possibilities and are the reason for this long timeline.”

Regarding the bricks, I had understood, perhaps a year ago, that the bricks would not return. That decision has been reversed. Rick stated, “In short the ramps have to go back almost exactly as they are today because they were deemed historically significant and contributing structures to the buildings there that have historic tax credits associated . . . that will be included in our RFP. Earlier we did not think that was feasible due to age and condition of the bricks.”

I consider that good news as the bricks are one of the most distinctive features of that viaduct. Many of them are worn pretty badly, however, so I contacted Rick to see if they would use the original bricks or replace them with similar bricks. He told me the original brick will be returned. I assume some will have to be replaced with newer bricks and additional bricks will be needed because several large patches no longer contain the original bricks.

All of which leads us to the businesses. It simply had not occurred to me, but it’s obvious with a moment’s thought: the businesses located along the western side of the viaduct, which open up onto that sidewalk, cannot operate during the destruction and reconstruction of the viaduct. The businesses include Castleton Farms wedding planners, the Happy Envelope and Status Serigraph. Not only will the construction be a problem – their entrances will be suspended in mid-air a floor above the ground for the duration.

The city has informed the businesses they will be given a ninety-day period during which to move starting when the city is certain they are ready to begin the proposal, bidding and construction process. They’ve been offered a couple of options to help defray the cost of relocating. The monetary assistance doesn’t apply if they move prior to that 90 days, so the businesses feel it is imminent, but can’t yet move.

I stopped in to Justin Helton’s Status Serigraph shop and found him working on several projects including the cover art for a new Grateful Dead six CD set. Business has been good for him in this location where he moved just a few days over four years ago. He’s looking for locations and hopes he might find one downtown as it’s where he feels connected.

The Happy Envelope has announced their new location will be 4921 Homberg Drive, which seems to be a good fit for them, though I hate to lose them. They’ve been downtown since October 2010 when they moved into their original location in the Daylight Building. It’s been fun to see Sarah and Ty’s business grow and expand and we’ll wish them well.

No word on plans for Castleton Farms, the most recent of the business to locate along the viaduct.

So, three businesses will move and at least one of them will move from downtown. It’s unfortunate, but it’s part of necessary improvements and all should be better withing about twelve to eighteen months after construction begins which, as of now, is projected for spring of 2018.

Notes About the Weekend:

The East Tennessee History Fair will be held (primarily in Krutch Park) all day tomorrow, starting at 10:00 AM. Music, history tours of downtown, movies with historical ties, reinactors, children’s activities and more will be available.

Knoxcentric: Powered by Inside of Knoxville will air, as always, at 10:00 AM on Sunday morning on WUTK, 90.3 FM and streamed at http://www.wutkradio.com. My guest will be Ellen Zavisca, Principal Transportation Planner with the Knoxville Regional Transportation Planning Organization. We’ll talk about pedestrian and bike safety and, particularly, crashes in and around Knox County.