Somewhere in Time: A Knoxville Theater, and the Actress Who Inspired a Classic Film (Part Two) 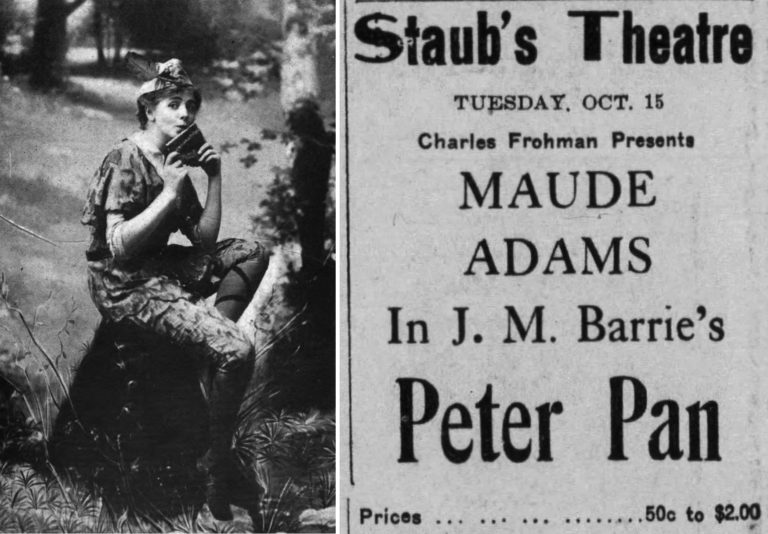 Guest post by Paul F. Brown, a freelance content writer in Knoxville, specializing in higher education marketing, history, and business. He is the author of Rufus: James Agee in Tennessee, and may be contacted through his website: www.paulfbrown.com. (Miss part one? Read it here.)

Maude Adams had enchanted audiences since childhood, and by the early 1900s, many considered her to be America’s greatest—and most charming—actress. She appeared on stage twice in Knoxville—in The Little Minister and What Every Woman Knows—before bringing her career-defining role to town in 1912, roughly a month before her 40th birthday. The production was not without difficulties, but it would rank among the greatest theatrical events in Knoxville history.

For J. M. Barrie, Adams had been the perfect muse ever since their first collaboration in 1897. Barrie had written the role of Peter Pan for Adams, and although another actress premiered the part in London in 1904, Adams became the first to perform it on Broadway the following year. She also improved the role, as in the scene where Tinker Bell drinks the cup of poison to save Peter. Adams came up with the idea to have Peter rush to the front of the stage and directly petition the audience: “Tinker is dying! The only thing that can save her is for you to believe in fairies. Do you believe in fairies?”

Her characterization would serve as the role’s prototype for a century—even in film. Performing as Peter Pan once in Marceline, Missouri, Adams impressed a young boy in the audience named Walt Disney; decades later, Disney’s animated version of the story would hit movie screens about five months before Adams’s death.

Adams brought a revival production of Peter Pan to Staub’s Theatre on October 15, 1912, in her final appearance in Knoxville. Her arrival that day coincided with news reports from Milwaukee of the attempted assassination of former president Theodore Roosevelt (who had campaigned for reelection in Knoxville just two weeks earlier).

In performing her most famous role, the actress needed more stage preparation than usual. Flying sequences required Adams to wear a girdle-like harness suspended by wires and controlled by experienced stagehands. Unfortunately, there was a labor dispute and Staub’s crew went on strike the day of the performance. A replacement crew was brought in but wasn’t able to operate the flying apparatus to Adams’s satisfaction. She stayed in her hotel room, refusing to perform until the labor issue was settled and the regular stagehands returned to duty.

Thankfully, the show went on, and the Knoxville audience was treated to one of theater history’s legendary performances. The local columnists couldn’t help but gush in their newspaper reviews the following day. From the Sentinel:

Maude Adams, as Peter Pan, was the very incarnation of youth and joy, she whistled and danced and sang and fairly crowed with the very joy of life until those in the audience felt the years slipping away. Even her voice was fresh and vibrant with youth and her every motion was grace itself. But the charm and grace and wonderful ability of Maude Adams is well known to theater goers. … [Her] artistic ability … is a constant joy and revelation.

And from the Journal and Tribune:

Miss Maude Adams was “Pan,” and in her presentation of the poet Barrie’s conception she was all that the poet in the characterization proclaimed her to be. Miss Adams was buoyant, vital and convincing as “Peter Pan.” One might descant on the beauties of her performance of “Pan” at length, but some things evade analysis, and Miss Adams’ art is one of them. It is a thing to admire for its simplicity and surpassing effectiveness. “Pan,” for her, is a vehicle par excellence of inimitable art.

Young Victor Seilaz, whose father owned the café at the Colonial Hotel, adjacent to Staub’s, was lucky enough to get Adams’s autograph before she left town. On the page beside her signature, in barely legible script, the actress wrote, “Faithfully Yours.”

Years later it was rumored that in 1917 Maude Adams performed once more at Staub’s, in Barrie’s A Kiss for Cinderella, and that she collapsed after the performance and subsequently quit acting for decades. But no evidence has been found of a fourth performance here. Adams was actually in Nashville, preparing to perform the play on November 5, 1918, when she fell ill.

All of Nashville’s theaters had closed on October 7, and Knoxville’s on October 9, due to the Spanish flu epidemic. They reopened on November 4—as if to accommodate Adams’s scheduled Nashville performances the next day. Since engagements in Nashville had followed each of her previous Knoxville visits, it seems probable that Knoxville would also have been on her 1918 tour itinerary had the epidemic not temporarily closed Staub’s.

Adams partly recovered in Nashville, but did not reschedule her performances there—or anywhere else on the tour. The experience hastened her into an early retirement, which she announced in January. For better or worse, Tennessee had shaped the destiny of Maude Adams.

She turned to other pursuits, including the development of a new type of theatrical lighting. In 1937, she joined the faculty of Stephens College in Missouri as an acting teacher. Over the years, her students included several young Knoxville women—including Ann Bradley, Elizabeth Herbert, Grayson Hungerford, and Frances Young—who enrolled at Stephens to study under the great actress. Future Oscar winner Patricia Neal, upon graduating from Knoxville High School, strongly considered attending Stephens because of Adams (but ultimately chose Northwestern).

Despite a brief but highly publicized theatrical comeback in the early 1930s, and a rare Hollywood screen test in 1938, Adams remained much out of the spotlight until her death in New York on July 17, 1953.

Loew’s and The Lyric

Adams was one of many notables that headlined on Staub’s stage over the decades: Ethel Barrymore, Sarah Bernhardt, William S. Hart, Ellen Terry, Lillian Russell, Otis Skinner, John Drew, E. H. Southern, John Philip Sousa, Eddie Cantor, Fannie Brice, and even Frederick Douglass. In 1919, Marcus Loew purchased the theater and had it remodeled to accommodate vaudeville, musical acts, and motion pictures. Opened February 23, 1920, and managed by E. A. Schiller, Loew’s Theatre advertised with the slogan “The Best for Less at Loew’s,” but for whatever reason the enterprise wasn’t successful. The theater changed hands again in September 1921. Reopened October 4 as the Lyric Theatre, the new owners promised a return to the theater’s roots as a “road show” playhouse. The following February, it debuted its own resident acting company, Peruchi Players.

Since 1909, the smaller but newer Bijou Theatre across the street had given audiences other entertainment options, and begun compiling its own list of notable performers. By the time the Tennessee Theatre opened in 1928, the Lyric was moving further away from legitimate theater. Within a few years it was hosting wrestling matches on a regular basis, but still booked plays, movies, and musical acts—like Cab Calloway—into the early 1940s. But sports became the Lyric’s primary draw by late 1945, and remained so until 1950, when the wrestling matches moved to Chilhowee Park.

The building, widely considered a “fire trap,” fell into disuse and disrepair. In June 1954, Miller’s Department Store announced that it had purchased the entire block—bounded by Gay, Cumberland, State, and Main—and would raze the Lyric Theatre, Colonial Hotel, and other adjacent buildings to build a new store touted as “the largest under one roof in Tennessee.” Demolition of the old buildings began in the summer of 1956 and continued through the year’s end. The cleared lot was subsequently paved as a “temporary” parking lot—which remained there for decades. The new Miller’s was never built.

Today the First Horizon Plaza occupies the former lot where Staub’s/Lyric stood for 84 years. A wall marker near the corner of South Gay and Cumberland commemorates the site’s historical significance.

In the early 1970s, science fiction writer Richard Matheson was touring Piper’s Opera House in Virginia City, Nevada, when a striking portrait of Maude Adams in L’Aiglon caught his eye. At that moment, Matheson “creatively fell in love with her,” and used this experience as the basis for a novel, Bid Time Return. In this sense, Matheson and Adams find their fictional counterparts in the characters Richard Collier and Elise McKenna.

Matheson pored over biographies of Adams and closely modeled McKenna’s career history on hers. For example, we learn in the novel that McKenna was much lauded for her acting in The Little Minister, Peter Pan, What Every Woman Knows, and other plays from Adams’s repertoire. Much of Bid Time Return takes place in 1896 at San Diego’s Hotel del Coronado. But when Matheson adapted his novel as a screenplay, he moved the location to Mackinac Island, Michigan.

He also moved the story’s date up to 1912, and in doing so he unwittingly set the lovers’ brief affair in the year Maude Adams paid Knoxville a final visit to perform her most celebrated role. 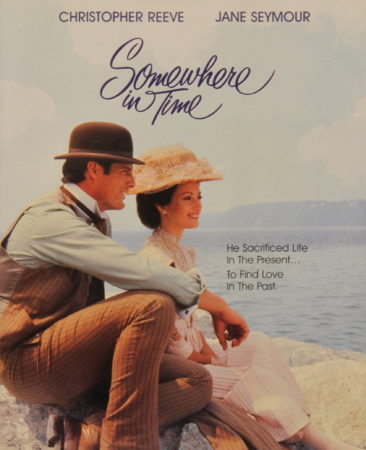 Released in theaters on October 3, 1980, Somewhere in Time disappointed at the box office but gained a cult following through home video rentals and television, and in 1990 an international fan club formed. Each year hundreds of devotees attend the “Somewhere in Time Weekend” at the Grand Hotel on Mackinac Island, the film’s main setting, to retrace the footsteps of Collier and McKenna.

This month, as we await the full reopening of Knoxville’s live theaters (and find ways to support them in the meantime), consider revisiting Somewhere in Time on its 40th anniversary. You might even imagine that, in an alternate universe, this star-crossed love story is set in Knoxville, 1912 … that an infatuated writer from our own time awakens in a strange room at the Hotel Imperial … and after finding his way downstairs, sprints two blocks down Gay Street to Staub’s Theatre … where, pushing past manager Fritz Staub, he enters the auditorium and sees Maude Adams on stage, aglow in footlights …