Knoxville has a Theater District? A brief history of Knoxville’s Theaters: Part One of Four 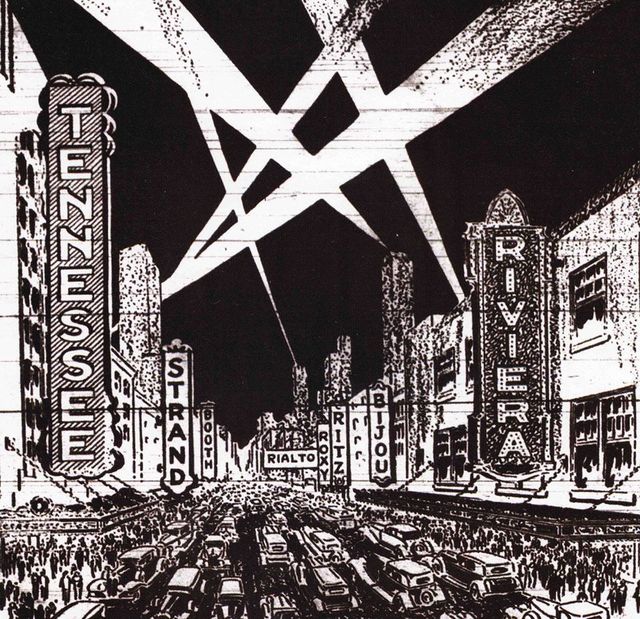 *This is the first in a four-part series about Knoxville’s theaters, written by Oren Yarbrough, Architect Intern with DIA and author of the popular recent articles on the AT&T building. Two will run this week and two will run next week. Here’s Oren:

A couple of years ago the city of Knoxville replaced and upgraded all of the wayfinding signage in the downtown area. With a few years of established positive growth and an eye towards more potential successes, the wayfinding signage had become a necessary tool in directing visitors and pedestrians into and around downtown Knoxville. One comment I heard fairly regularly, and even with some small level of sarcasm, was how people found it humorous that the new signage boldly referred to the 500 through 800 blocks of Gay Street as the “Theatre District” when we only have two historic theatre’s and one movie complex in the general area.

The new signage and public designation of this part of downtown Knoxville as the “Theatre District” is a small way to highlight the importance of the remaining theatres that are still open today while also reminding people of the role Knoxville played in being a regional destination for individuals wishing to see a live show or movie during the early decades of the 20th century.

My hope is that this four-part article will provide a brief and broad history of the many theatres that have operated here in downtown Knoxville and that you, as a reader, will finish these articles having a new-found pride in the significance our city once had and continues to have today in performance art, music, and film.

I’d like to first recognize some very talented people who have done amazing research into the topic of Knoxville and her many theatres over the years. Jack Neely is perhaps the best historical author in Tennessee and his continued focus on educating people about the colorful and unique history of Knoxville is a gift that many locals have come to treasure. Jack Neely has done many individual articles in various publications that have touched upon specific theatres or buildings that once housed a theatre. If you like history and love Knoxville then you should check out his newest media platform, Knoxville History Project, for more upcoming work.

I’d also like to mention the author Ronald Allen who passed away in 2011. Ronald Allen wrote a very rare book called “A History of Theatres in Knoxville, Tennessee 1872-1982” which he had published shortly before his death. Through my research online and reading commentary from other history nerds such as myself ,this book by Allen is a very well written overview of Knoxville’s theatres for the last 150 years.

One valuable source of some of the best commentary I found online on Knoxville Theatres was by AC Entertainment Technical Director, Tim Burns. Burns’ passion for theatres is very apparent when reading his in-depth and well-referenced anecdotes and facts he leaves in the comment section on websites devoted to theatre history and preservation. I’d also like to thank Alan for letting me use his blog as a platform to share this kind of information with you. The last big thank you is for the Historic McClung Collection of photographs that I amply sourced for this piece.

The year most commonly sourced as the beginning of Knoxville’s Theatre District is 1872. During this year Peter Staub, a Swiss born immigrant and eventually a 2-time Mayor of Knoxville, built the Staub Opera House. The Staub Opera was Knoxville’s grandest theatre for many decades leading into the 20th century and had a capacity of 1,500 seats.

In 1920 the Staub came under new management and was named the Loew’s Theatre and soon after the name was changed to the Lyric Theatre. The Lyric Theatre operated until 1956 when it and the Colonial Hotel next door were torn down for a future new location of Miller’s department store, which was never was built. Today the site of the former Staub Opera House is the location of First Tennessee Tower on the 800 block of Gay Street.

Staying on the 800 block we find one of the theatres that was fortunate enough to survive to present day and remain an actively functioning performance venue. Across the street from the Staub Opera, the Bijou Theatre was first opened in 1909 as an addition to the rear portion of the Lamar House Hotel. The Lamar House Hotel was first constructed in 1817 and later modified in the 1850’s, making this structure one of the oldest surviving buildings in present day Knoxville.

The Lamar House Hotel was one of the nicest hotels in Knoxville during the 19th century and hosted 5 different Presidents while they visited East Tennessee. The addition of the Bijou used a portion of the hotel’s storefront on Gay Street as the new lobby for the theatre. The development of the Bijou was led by local businessman and developer, C.B. Atkin, owner of a Knoxville furniture company that was nationally known for decorative fireplace mantels.

The Bijou Theatre was originally built with a capacity of 1,500 seats and had 2 levels of balconies, the upper balcony was the only location originally available to African-Americans. Over the next 60 years, the Bijou changed hands many times and was a home and venue for Vaudeville, live concerts, plays, films, The Knoxville Symphony Orchestra, and even a place for local high schools & colleges to perform plays and school functions. By the late 1960’s the Bijou had become a  pornographic movie house and the former Lamar House Hotel became a low rate hotel and sometimes brothel.

In 1974 the owner was evicted for unpaid taxes and the Bijou was at serious risk of demolition. A group of concerned local citizens formed what we know today as Knox Heritage to fight the building’s demolition and to purchase it in order to create a new life for the Bijou as a community theatre. Over the next few decades the Bijou has been remodeled and restored in waves and in recent years AC Entertainment has taken over management of the structure. The Bijou is a poster child of a successful preservation of a historic structure and Knoxville is fortunate to have it.

Moving to the 700 Block of Gay Street we find the Grand Theatre. Originally built in 1907 and named the Edison Theatorium, this theatre was built for moving picture films and it had a capacity of 850 seats. Shortly after openin,g the Edison Theatorium began a series of name changes, ending in 1910 when it became the Grand Theatre, which it remained until it closed in 1917.

The building the Grand Theatre sat in remained a Knoxville landmark for quite some time after the theatre was shuttered in 1917. The building at 703 Gay Street housed the “Yellow Drivurself Company”, a forerunner to the Hertz Rental Car company, for a number of decades starting in the 20’s. A portion of this block was torn down in the 1960’s for a parking lot and the remaining buildings finally removed in 1995 after a fire. Today this entire block is a parking lot, save for the Pryor Brown Garage. Let’s hope the Pryor Brown is saved and redeveloped so the remaining block can see a future as bright as it’s past.

In part two, we’ll look at the 600 block through the 400 block of Gay Street and look at our signature surving theatre, The Tennessee Theatre, as well as several which no longer exist.