Meet Your Favorite Band You’ve Never Heard Before: The Black Lillies Play Two Nights at the Bijou This Week 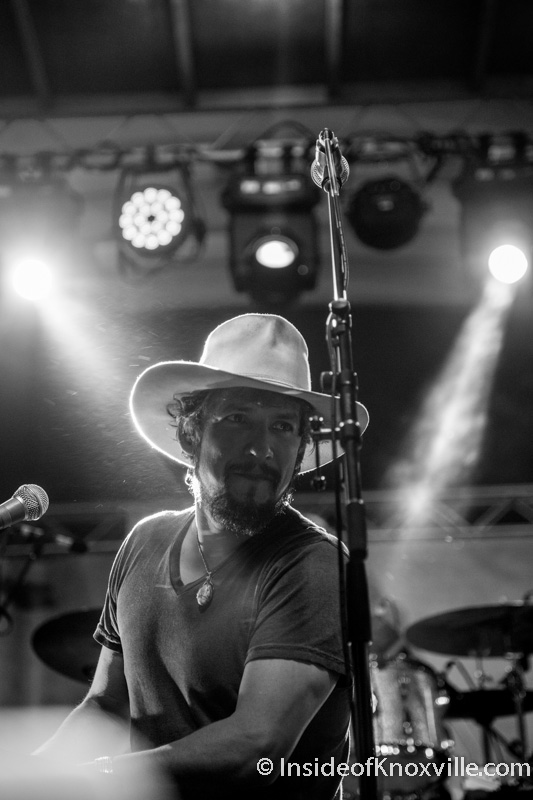 I met Cruz Contreras last week to talk about the upcoming Black Lillies shows at the Bijou, this Saturday and Sunday nights (tickets here) and the twisting, turning – and mostly touring – road that has brought the band to this point in their careers. They are at once better known nationally and internationally than ever before – and perhaps a bit less known in their own hometown because of the same hard touring that has been the base of their rise from Knoxville band to well-known road band.

The band got its start in 2009 as Cruz stepped out in front of a band for the first time. In February of that year, the band formed after Cruz and Leah Gardner, who had performed small local shows as a duet in the wake of the dissolution of Robinella and the CC String Band. Joined by a full band, with Cruz on keyboards and sharing vocals, the band first played (and I first saw them) the Bijou Theatre stage when Tennessee Shines was being produced there.

The year included the release of the band’s debut album, “Whiskey Angel,” that first appearance on one of Knoxville’s premier stages and, by summer a spot on Tennessee’s biggest stage, Bonnaroo. That’s where long-time Lillies manager Chyna Brakeen saw them and offered to step in to work with the band. Cruz told me it seemed like it was going to be easy. They were on their way. He wryly notes, “It may have given us some over-confidence.”

The year ended with a tour including forty shows in forty days. The old school tour, completed without the use of smart phones and operated via a spiral notebook, was in the words of Cruz, “brutal.” Still, it was the beginning of eight years averaging 175 nights a year on the road. It’s the kind of grueling schedule that makes a band tight and simultaneously challenges everything they believe about themselves. It can be exhausting and it clarifies for each member their level of dedication to the music and the lifestyle required for success.

As the band refined their sound and direction, the group that began more as a string band has been variously described as a country and folk band, a country band, a country-rock band and country-jam. Cruz’ songwriting, which has been the heart of the band since very early, drove the changes in direction as did the evolving set of players. Cruz said he’d, “always envisioned the band as a bar band and wanted to be loud, fun and raucous.”

Some players had significant impacts on the sound and on the performances. Cruz had known Tom Pryor from the early days when he was playing with the CC String band. He later got to know him better via their mutual connection with Jay Clark. Tom added a blistering presence – whether on pedal steel or electric guitar – that drove the band to a more aggressive live show. Tricia Jean Brady replaced Leah as a female vocalist and remained with the band for three albums, developing and growing her own fan base.

Through all the personnel changes, the search has been for the right sound, for compatible musicians who could tour. Quite simply, the perfect fit has been elusive. 2017 seemed to offer clarity as it progressed. The year started with the band touring with six members, including Haley Cole taking the female vocals. Then the band became a five piece and, ultimately, a four-piece band, which is how they’ve ended the year with their most recent shows.

Cruze said the first time they took the paired-down line-up on stage, he wasn’t sure how it would play with a fan base that has been steadily devoted, but had come to expect a larger group and one that included female vocals. The early shows featured a new song or two written for the line-up and by the end of the tour, they were playing thirteen new songs interspersed with older material and he said the response was as good as ever.

The current band consists of Cruz on guitars and keyboards, Sam Quinn on bass, Bowman Townsend on drums and Dustin Schaefer on guitars. It’s the traditional four-piece, all male, roots rock-and-roll band with three-part harmony and multiple songwriters. Cruz says it is an arrangement that became popular for a reason. They can travel more simply with fewer people. They can share songwriting, arranging and vocals. The collaborative possibilities of a tight group of dedicated, full-time musicians are powerful.

The band has always maintained a direct connection to fans and Cruz said that continues through the Sprinter Sessions, rough cut first looks at emerging songs. The weekly videos offer a new song each time out and features Cruz and sometimes other members of the band. It’s an effort to share the raw creative effort with the fans who are with the band to experience the real, full ride. Response to the new material and the unvarnished presentation has been strong.

Here’s a look at how the Sprinter Sessions are translating to the stage with the full band:

Cruz gets intense when discussing the new material and the sessions: “Who do I want to make music for? A fan base that is open. As the chemistry in the band has gotten healthier, the audience has responded as well.” It’s all leading up to a new record which Cruz says shows, “real evolution,” adding, “If that is the type fan you are, we are your band.” He says it’s been gratifying to hear the response at live shows for the songs that are only available through those recordings.

The two nights at the Bijou will be completely different, which is why the band is offering tickets for single nights or both nights (and the option to go bowling with the band after the first show). The first night will feature a roulette wheel which fans will spin to determine which song from the recorded catalog will be played. The new material will make its Knoxville debut. Saturday night features opener The War and Treaty and the New Years Eve show features Mike Farris and Nora Jane Struthers.

The days of constantly playing Knoxville bars have long passed and Cruz notes that younger music fans may have “heard of” the band, but not actually have heard them. It’s a byproduct of being on the road for the last several years. They may be better known at this point in places other than their hometown and they hope to remedy that starting with these shows.

The media and music environment has shifted dramatically since the early days of the band. They started as digital content began to allow people to share music without paying. Outlets that once promoted local music, such as Metro Pulse have disappeared. Major record label deals have been sharply curtailed and streaming music is now a way of life for many. Live shows are the place where the magic remains and the band plans to continue connecting at that most primal level.

“Music isn’t enough: It is connected to the story.” The band is at a point of telling the next chapter to that story. “We plan to adapt and thrive,” Cruz says with a sound in his voice that makes you believe the band will do precisely that. “We’re being surprised as much as anybody.”

The group will begin recording an album in January and you’ll soon see references to a pledge campaign on their Facebook Page to support that effort.