Knoxville has a Theater District? A brief history of Knoxville’s Theaters: Part Two of Four 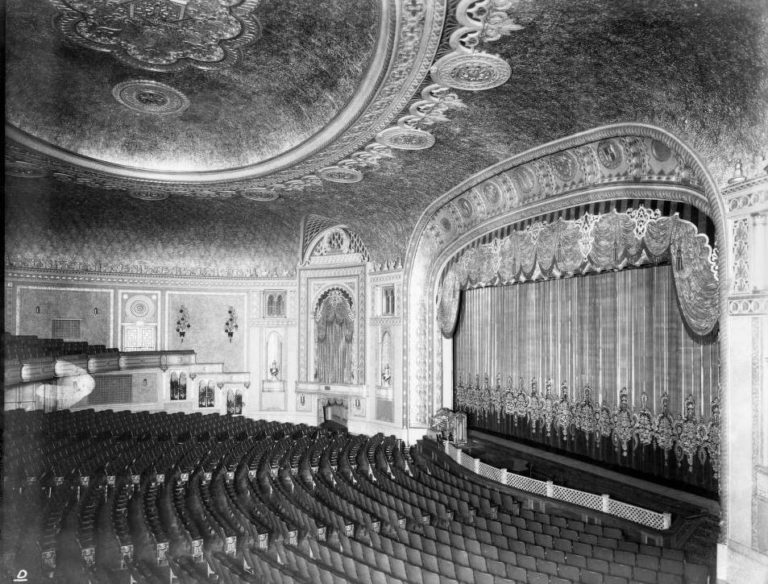 This is a continuation of a four-part series on Knoxville’s Theatre District written by guest writer Oren Yarbrough, Architectural Intern with DIA. (Part One, Part Three, Part Four) Here’s Oren:

Ironically, the location of today’s “Theatre District” sign rests on the 600 block of Gay Street, directly across the street from the only theatre to ever reside in this block. Similar to the Bijou Theatre, The Tennessee Theatre was built as part of a massive addition to the rear portion of an already important Gay Street structure. C.B. Atkin purchased the “Knoxville Banking & Trust Building” in 1917 & renamed it the “Burwell Building” after his wife’s family name. Talks of putting a theatre on this block began as early as 1920 with a public announcement in the New Sentinel and by 1927 a design by prominent Chicago based architects, Graven & Mayger, had been chosen & construction had begun.

The Tennessee Theatre had its grand opening on October 1st, 1928 with an estimated 10,000 people in attendance to watch “The Fleet’s In” starring Clara Bow. According to some sources, the success of the Tennessee Theater was so important to C.B. Atkin and his business partners, that in 1926 Atkin sold the Bijou Theatre to another local businessman with the stipulation that the building couldn’t be used for theatrical presentations for a number of years. It was after this sale that Atkin announced the future Tennessee Theatre to begin construction. For roughly the first four years the Tennessee Theatre was open it did not have to compete with the Bijou for ticket sales.

The Tennessee Theatre is the definition of a movie palace and, much like other theatres built during this time, featured the best design and latest technology. The Tennessee was the first air conditioned theatre in Knoxville and featured a capacity of 2,000 seats. In addition to the films shown at the theatre there were also performances of the “Mighty Wurlitzer”, a purpose-built custom pipe organ, several times a day. Over the decades the Tennessee Theatre hosted movie premieres and significant milestones in the city’s history.

But, by the mid 1970’s the theatre had been on a steady decline and had gone through a handful of renovations and “modernizations” to draw in crowds from the suburbs, having lost flagship status to the Downtown West theatre in 1972. In 1977 the theatre was closed down officially by ABC Southeastern only to be briefly reopened for a while as a classic film venue.

In 1979 a father and son duo by the name of Ralph & Robert Frost began managing local theatrical and musical acts in the theatre with some success and in 1981 local businessman and philanthropist, James A. Dick, purchased the Burwell Building and the Tennessee Theatre from the descendants of the Atkin family. Dick did massive renovations to the theatre and restored the lobby to its original design, including the restoration of the original crystal chandeliers from Czechoslovakia.

In 1982 the Tennessee Theatre was added to the National Historic Register of Places and over the following decades it saw success in playing host to the Knoxville Opera, the Knoxville Symphony Orchestra, and many different special concerts and films. In 1996, after the creation of the non-profit “Historic Tennessee Theatre Foundation” (HTTF), James A. Dick donated the theatre to the organization and sold the Burwell Building. This is also the same year that AC Entertainment officially became the manager and operator of the Tennessee Theatre.

In 1999 the Tennessee Theatre was officially designated the State Theatre of Tennessee by the state legislature; Not long after, the HTTF restored the Mighty Wurlitzer and began a fundraising campaign that culminated in a 30-million-dollar renovation and restoration of the grand movie palace that took almost 2 years to complete. After the renovations, the theatre’s capacity is now around 1,500 & the stage and fly loft are now capable of hosting travelling Broadway productions and even larger concert performances than it had previously.

Fun Fact: Of the number of movie palaces designed by Graven & Mayger Architects, only a few are still existing today. The Fisher Theatre in Detroit and the Alabama Theatre in Birmingham have survived the last century and are still operating today. The Fisher Theatre, an Egyptian inspired design, was sadly remodeled beyond recognition in the 1960’s. The Alabama Theatre was renovated extensively and is hugely successful, having also received status as the official theatre of Alabama.

The Tennessee Theatre merits more focus because it is such a valuable asset to the city of Knoxville and it’s rise in success over the last decade has run parallel to the renaissance downtown has also experienced. The remainder of the articles on the Knoxville Theatre District are of buildings that were not fortunate to experience the same decline and rebirth as the Bijou and the Tennessee. The efforts of the groups and individuals it took to preserve these structures deserves a high level of praise because of the gift they have given future generations of visitors and Knoxvillians.

The next part of this series I’d like to begin with the 500 block and the theatre’s that once occupied this location and why the “Theatre District” definitely lives up to her name here. Because I want to save these theatres for later I will wrap up this article by instead giving you a brief history of one theatre that some readers might even remember going to see shows at back in the day.

The Roxy Theatre once stood on the 400 block of Union Avenue. In the 1930’s, the Roxy opened as a burlesque theatre with a capacity of only around 500 people. The Roxy soon began playing second run films and in the late 40’s live shows were dropped from the theatre’s operations. Older generations of local Knoxvillians might be familiar with the Roxy because of the Saturday morning Western film double features.

The Roxy sat at a vibrant intersection of Knoxville during a time of rapid change from the 30’s through the 60’s. It was around the time the Roxy was first built that the TVA offices across the street were first constructed and Union Avenue was experiencing massive growth. Cut to 25 years later and, by the end of the theatre’s run, the area around Market Square had experienced such economic decline that the city was actively voting to demolish the old Market House in favor of a covered pedestrian mall with parking.

In 1959 the Roxy was torn down for a parking lot and it remained that for over 40 years. In the early 2000’s the City of Knoxville developed the site into the Market Square Garage and the part of this multi block site that ran along Union Avenue was also developed into downtown lofts and retail stores on the street level. Of the places featured in the Theatre series, the Roxy is one of only a few sites where the old structure was torn down and eventually redeveloped with something other than an empty surface lot.

Please return next week for the third part of the Theatre District articles when I further explore and attempt to briefly describe the varied histories of Knoxville’s theatres. With almost 10 more theatres remaining; we will discuss a couple more movie palaces, a former theatre you might be living in on Gay Street, and the historical significance of Knoxville’s theatres to African American culture in the 20th century.