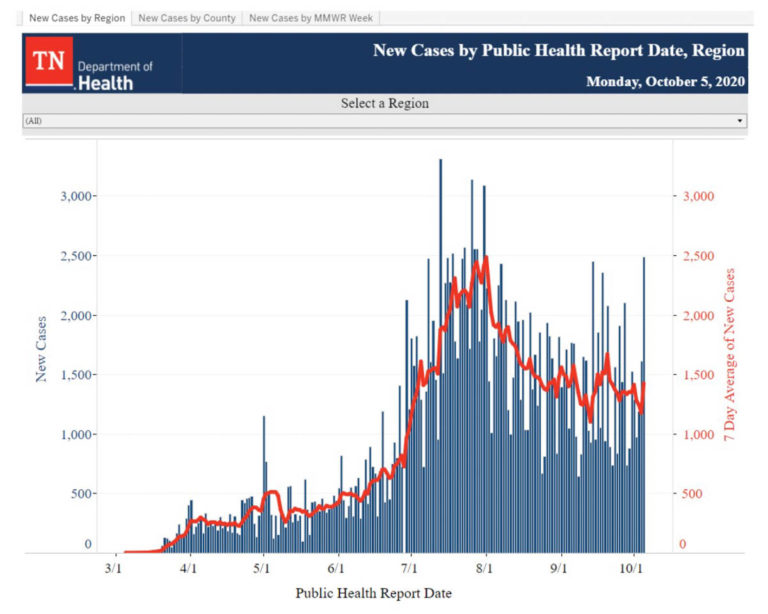 The state of Tennessee reported 2,489 new cases of COVID-19 yesterday, along with 20 additional deaths from the disease. Since the beginning of the pandemic, Tennessee has reported 195,220 confirmed cases and 8,479 probable cases.185,221 Tennesseans have recovered and 7,402 remain ill. The twenty deaths bring Tennessee’s death toll to 2,597.

40 additional people were hospitalized across the state yesterday, bringing the total of COVID-positive Tennesseans having been hospitalized at some point during the pandemic to 8,923. After seeing a decline for weeks, hospital admissions have risen most days since the last few days of September. Yesterday saw a dramatic increase of 108 (this data does not line up with the 40 additional hospitalizations for the day, but I suspect the the hospital chart on the state website is ahead of the dashboard, which is where that number is located.

There are currently 958 COVID-positive Tennesseans hospitalized, including 276 in the ICU and 135 on ventilators. The state website only charts hospital statistics for the last six weeks, so comparisons to data before that point are not available. The 958 hospitalized is the highest number in the last six weeks.

As has been the pattern with test reporting in the state, several very low testing days was followed by a surge two days ago and an even bigger one yesterday. The state reported on over 44,000 tests, bringing the pandemic total to over 3,000,000. The state reported a 6.26 positive test result rate from the day and Johns Hopkins University reports a seven-day average of 6%.

Other notes: With the surge in testing, the number of new cases in the state for the day was the highest single day of new case numbers since July 31, and was the 8th highest of the pandemic. It was also high enough, that Tennessee ranked as the third highest state for new cases for the day, behind Texas and California. Tennessee has now moved up to 8th for per capita cases, remains 9th in per capita testing and is now 27th in per capita deaths. The seven day average for cases is 1,424 per day and for deaths is 30 per day.

Today, the Knox County Health Department is reporting 114 new cases, the most since September 19. I’ve noticed more correlation between local numbers and state numbers/testing, which makes logical sense if local test reporting is aligned with state test reporting. 10,368 cases have been confirmed in Knox County since the beginning of the pandemic, and 448 cases are considered probable. 9,684 are reported as inactive and 1,047 are currently ill.

The report states that 384 Knox County residents have been hospitalized with the illness since the beginning of the pandemic (up two from yesterday), but the number in the hospital remains the same from yesterday at 50. A note on the website indicates not all hospitals have reported. There are no new deaths reported today, leaving that number at 85.

Dr. Buchanan led today’s briefing and began by expressing support to those experiencing mental illness. For her real-life example of how to safely experience Halloween, she recommended an outdoor costume contest for children, which could include observation of the five core behaviors and recommended Halloween face coverings which are being sold locally. Another option is to have the contest remotely with family and friends across the country.

She discussed the flu vaccine program, which is free and ongoing. She confirmed the above numbers and did not expand on the hospital number.

All the numbers reflect a plummet in cases and quarantines from just a few weeks ago when there were nearly 700 cases and nearly 2,200 people in isolation or quarantine. No additional clusters have been reported in several weeks.

The Knox County School system is reporting 53 active cases, including 30 students and 23 staff members. The numbers reflect an increase from 48 the day before and a decline from 65 the same day last week. The week-over-week decline may be more important, as the pattern has shown drops on Monday, with increases through the week each day.

316 students and staff are reported to have recovered and 1,069 remain in isolation or quarantine. The later number reflects an increase of 41 from yesterday and from last week. (Both the previous day and the same day a week earlier reported 1,028). Of the 1,069 in quarantine or isolation, 940 are students and 129 are staff.