Somewhere in Time: A Knoxville Theater, and the Actress Who Inspired a Classic Film (Part One) 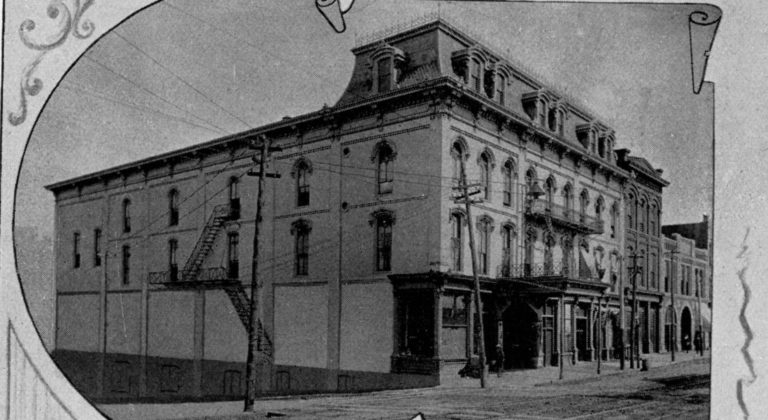 Guest post by Paul F. Brown, a freelance content writer in Knoxville, specializing in higher education marketing, history, and business. He is the author of Rufus: James Agee in Tennessee, and may be contacted through his website: www.paulfbrown.com.

Forty years ago this October, a classic motion picture opened in theaters. It tells the story of playwright Richard Collier, who becomes obsessed with a popular stage actress from a bygone era, Elise McKenna, after seeing her portrait in a hotel museum. Collier falls deeply in love with the woman, and somehow wills himself back in time in order to meet her.

This 1980 film, Somewhere in Time, stars Christopher Reeve as Collier, and Jane Seymour as McKenna. In the movie, McKenna is described as having “a magic quality as an actress” and being “one of the most revered actresses of the American stage.”

Though the plot is fiction, Somewhere in Time and its source novel draw on the biography of a real actress, Maude Adams, who graced the stage of Knoxville’s Gilded-Age opera house on three separate visits—all in October. She last performed in town 108 years ago.

Coincidentally, both Maude Adams and the local theater where she performed began life in 1872. Knoxville was growing into an industrial center by then, expanding geographically through annexation, and making civic and cultural improvements. Peter Staub, a Swiss native and local businessman, had the city’s first opera house built, based on a design by J. F. Baumann. The three-story, Mansard-roofed building was erected at the southeast corner of Gay and Cumberland. Inside, the stage measured 25 by 48 feet, and the auditorium seating included the parquet circle, dress circle, galleries, and private boxes. Staub’s Opera House opened on October 1, 1872, with future New York Times publisher Adolph Ochs as head usher, and English native Herbert Hodgson as the orchestra leader.

Incidentally, Hodgson’s sister Frances, a local writer, would eventually publish as Frances Hodgson Burnett and adapt many of her own novels for the stage—several of which would appear at Staub’s. One Burnett play, The Pretty Sister of José, would debut on Broadway in 1903, with a popular actress named Maude Adams in the lead.

Less than six weeks after Staub’s opened, and 1,500 miles to the west, Maude Adams was born in Salt Lake City on November 11, 1872. Not to be confused with a similarly named Swedish actress of the 1970s, Adams was appearing on stage by the age of nine months, and would make her Broadway debut at 16. Her popularity grew, and under manager Charles Frohman, Adams caught the eye of Scottish author J. M. Barrie, whose subsequent dramatization of his novel The Little Minister was the first in a string of plays that he wrote especially for her. Opening in 1897 with Adams as Lady Babbie, The Little Minister broke box-office records and made the actress a star. Adams toured the nation—and, for the first time, the South—in the production’s 1904 revival.

By the time Adams visited Knoxville, Staub’s Theatre had been completely gutted and remodeled twice. The latest expansion, in 1901, broadened the stage, added a fly gallery above it, and more than doubled the seating capacity to 1,800. Fritz Staub had long ago taken over operations from his father, Peter, who died in May 1904. Maude Adams and company arrived at Knoxville’s Southern Station on October 17, 1904—less than a month after scores of victims from the deadly New Market train wreck were brought through the same depot and taken for medical attention or burial. The Sentinel announced Adams’s arrival:

At 11 a.m., the cast and crew checked into the Hotel Imperial at the northeast corner of Gay and Clinch (where Hyatt Place Knoxville now occupies the 1919 Farragut Hotel building). Adams’s performance at Staub’s that night, which reportedly attracted “one of the largest audiences ever seen in Knoxville,” also drew praise from the Sentinel’s reviewer, who wrote:

To describe the fine lines of Miss Adams’ character is an impossibility, for it dwells in the region of genius … [She] was a creature of lovely perfection who entranced her audience and placed those who had gathered there to see the play in the positions of sympathetic friends. They loved her and were with her in her mad pranks heart and soul, and the deafening applause which always followed her exit from the stage attested to her popularity with Knoxville people.

Adams left for Chattanooga the next morning. On a Broadway stage the following year, she would debut in the role for which history would remember her—Peter Pan.

What Every Woman Knows

By 1910, Adams had indeed earned her reputation, in the words of a Sentinel journalist, as “perhaps the most popular player on the stage in this country.” She returned to Knoxville that October 24, less than two weeks after the city’s inaugural Appalachian Exposition had wrapped at Chilhowee Park. This time Adams starred as Maggie Wylie in Barrie’s What Every Woman Knows, and the much anticipated event filled Staub’s auditorium to capacity. Both of Knoxville’s newspaper reviewers concluded the next day that Adams was “charming” above all. The Journal and Tribune had this to say:

No other actress on the American stage so nearly defines in her personality the meaning of the word, charm, as does Miss Adams, and the hold that she has taken on the theatre going public since her first appearance seems to increase. … The delicious touches of human nature, the wit, pathos, and, in fact, the great genius of Barrie is made overwhelmingly precious in the hands of Miss Adams. … She can win a laugh or bring the tear, both in the same breath, and she lets the audience see down into the depths of the soul of the character portrayed in a way that causes them to reverence and to love her as it is the lot of a few women to be loved. … It is well for the stage that such a woman as Maude Adams comes occasionally to sweeten the atmosphere and to restore ideals.

The Sentinel responded with this somewhat more objective review:

It matters not what America’s most charming actress appears in … her appearance in Knoxville is the signal for the most brilliant evening of the theatrical season. … There is but one Maude Adams. There will probably never be another. She is not handsome, nor is she beautiful. Critics are even divided as to whether she has histrionic ability. Every one is forced to admit, however, that she is entrancing, that she is altogether charming. She is so distinctly feminine. Her charm is generally attributed to “personal magnetism,” but one wonders if this “personal magnetism” isn’t, after all, the highest type of acting. … After searching the lexicon of the stage for suitable expressions to convey an idea of Maude Adams’ charm, one must finally give it up and say “Maude Adams is Maude Adams.” This is placing her in a class alone.

Knoxville would have to wait two more years to see Adams again. Her legendary final performance at Staub’s would occur the fall that both the theater and the actress turned 40.

In Part Two, we’ll continue the story of Staub’s Theatre, including its eventual transition from legitimate theater to sports venue, and the building’s unfortunate loss—in perhaps the worst real estate deal the city has ever witnessed. We’ll also find out how Tennessee influenced Maude Adams’s decision to quit acting, and how a museum portrait of the actress inspired the creation of Somewhere in Time.