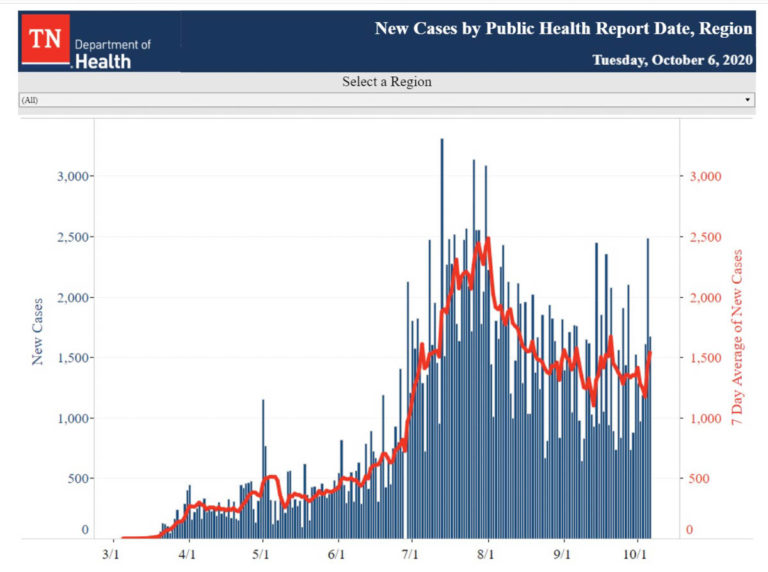 It’s the middle of the week, the weather is fine and there is no Board of Health Meeting tonight. I can’t be the only one who’s happy (or at least relieved) at all three. They will meet again next week and we’ll see if every week is enough. At least it gives us the chance to relax and watch the VP debate tonight. Oh, wait, did I just use “relax” and a reference to our current political world in the same sentence? Try not to break your television screens with flying objects.

The state of Tennessee reported 1,676 new cases of COVID-19 yesterday and 24 Tennesseans died of the illness. To date, there have been 196,623 confirmed cases, 8,752 probable cases and 2,621 deaths from the illness in the state. 187,026 people have recovered from the illness and 6,976 people remain ill. Tennessee had the 6th most cases of the any of the states for the day, and is currently averaging 1,538 cases and 28 deaths each day.

53 additional people were hospitalized yesterday, bringing the pandemic total to 8,976. The number of currently hospitalized patients continues to rise, and has now reached 971 COVID-positive Tennessee residents in the hospital. The number is the highest it has been in the last six weeks. Of these, 291 are in an ICU and 142 are on ventilators. The latter two numbers have also increased in recent days, but are not at six-week highs.

Testing reported yesterday dropped back into an average range for the state, with just over 25,000 tests, bringing the total to about 3,032,000. The state reported a positive test rate of 7.32% for the day and Johns Hopkins places the seven-day positive test average at 6%.

The Knox County Health Department is reporting 104 additional cases today, marking the second consecutive day over 100, after seven days under that mark. These are the first consecutive days over 100 since September 13, nearly a month ago. The total confirmed cases for the county since the beginning of the pandemic is now 10,472. Of these, 9,684 people are considered to have inactive cases and 1043 people remain ill.

51 COVID-positive Knox County residents are currently hospitalized and the total for the pandemic is 385. To the best of my knowledge, the current number of hospitalized residents is the highest since the pandemic began and follows state trends of increasing hospitalizations over the last week.

The reported positive test percentage has risen to a seven-day average of 8.4%. The benchmarks, due to be updated today, had not been updated as of the publication of this article.

For the second consecutive day, the University of Tennessee reports 58 active cases, including 3 employees and 55 students. 1,504 members of the university community have recovered and, for the second consecutive day, six new cases were reported. The number in quarantine or isolation increased slightly from 225 to 236, which includes 144 non-residential students, 61 residential students and 31 employees. There have been no clusters reported in recent weeks.

Dr. Buchanan again addressed the low UT numbers yesterday and confirmed that students are telling the health department directly that they will not be tested because they do not want to quarantine. UT’s numbers seem to be running far below a number of other universities and it is speculated that this is part of the reason. Clearly, though tests are available to students, UT has no comprehensive testing program that reaches the majority of students. According to this NPR article from yesterday, the same is true of the vast majority of colleges and universities.

According to the Knox County School system, there are currently 59 active cases of COVID-19 among students (38) and staff (21). This reflects an increase of six over yesterday’s report, but a decrease of 2 from the same day last week. 326 have recovered and 1,055 (939 students and 116 staff) are in isolation or quarantine. The number in quarantine or isolation has remained just above 1,000 most recent days.

Austin-East High School is the only school currently on virtual-only learning. Metrics for teacher attendance have returned to green, leaving only custodial and substitute metrics in the red.