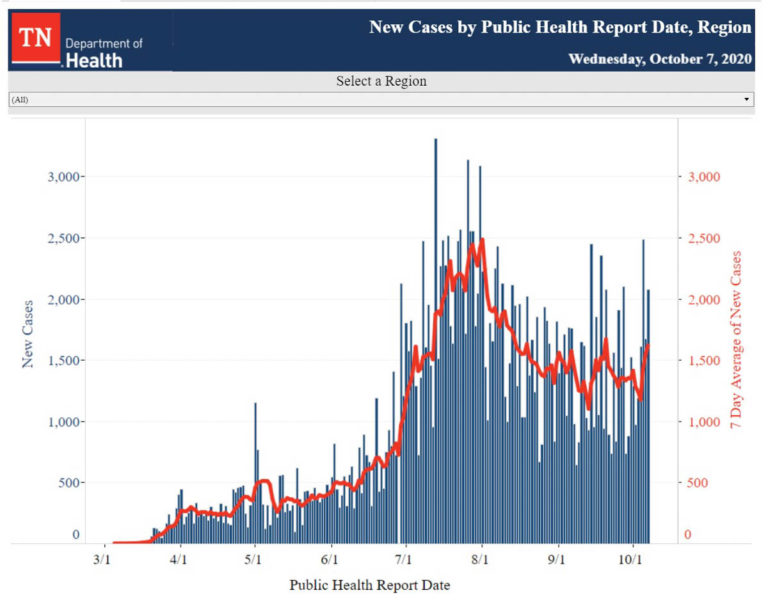 Hello Thursday. Could I have an hour-and-a-half of my life back from last night? Or one direct answer to a question? Could the election just be over? Ah, we want time to hurry and slow down. Urban Boy had a revelation he shared at breakfast this morning: “Sometimes when you think Friday is the day after Wednesday, but you learn that Thursday is next, it’s not good.” No, it is not.

The state of Tennessee reported 2,080 new cases of COVID-19 yesterday, bringing the pandemic total to 198, 450 confirmed cases and 9,050 probable cases. 188,576 cases are considered inactive and 7,232 people remain ill. The number of cases for the state ranks 6th highest in the country for yesterday and the seven-day average is 1,616, the highest it has been since September 20.

21 additional deaths were reported yesterday, bringing the pandemic total to 2,642 Tennesseans who have died. The seven-day average for daily deaths for the state is currently 27.

59 COVID-positive Tennessee residents were admitted to the hospital yesterday, bring the total hospitalized at some point during the pandemic to 9,035. 973 are currently hospitalized, up two from what was reported yesterday. Both ICU (283) and ventilator (142) numbers are down slightly from yesterday.

The number of tests declined for the second consecutive day after high number the previous day. Just over 22,000 tests were reported as compared to just over 44,000 two days earlier. Of concern is the fact that, with half the tests of two days earlier, the lower test number resulted in roughly 84% of the cases derived from the larger group. In other words, the test positivity rate was much higher at 9.08%. Johns Hopkins is reporting a seven-day positive test average of 6.4% for the state.

The Knox County Health Department is reporting 83 new cases today, returning to under 100 after back-to-back days above the mark. The pandemic total for cases is 10,555 confirmed and 467 probable cases. Of these, 9,990 are considered inactive and 947 remain ill. The number of active case is down about 100 from yesterday and is at its lowest number in the last five days.

There are currently 51 COVID-positive Knox County residents in the hospital, the same number as yesterday and a pandemic high for the county. A total of 385 Knox County residents have been hospitalized with the illness at some point during the pandemic. No additional deaths were reported, leaving that number at 85.

As of yesterday, the health department is reporting a 7.2% positive test result rate for the day and a seven-day average of 8.4%, but those numbers have not been updated since 10/5. All benchmarks remained unchanged from last week: Case and public health capacity remained green, while testing, hospitals and deaths remained yellow.

Charity Menefee chaired the meeting today. She reported on the ongoing flu vaccine efforts. Details are on the website. She confirmed the above numbers. She discussed benchmarks, which are noted above. She said there is a small trend upward in cases, but not enough to shift that metric. She said local testing has continued to decrease over the last two weeks. She implored individuals and businesses to cooperate as contact tracing is executed.

She pointed out that hospitalizations are at their highest since the beginning of the pandemic. Hospitals said capacity is still adequate, but the trend is in the wrong direction. She (and the hospitals) urged people to continue to be tested. There have been 13 deaths over the last two weeks, with 8 in the last seven days. She pointed out that positive test rates are going up.

The University of Tennessee is reporting 61 active cases, including 2 employees and 59 students. 1,512 have recovered and 6 new cases were reported yesterday. The number in isolation or quarantine has increased steadily over the most three days and is now at 271, including 237 students and 34 staff members. It’s the highest number since October 2, but remains massively below the peak of nearly 2,200 nearly a month ago.

There have been no new clusters in recent weeks.

The Knox County School System is reporting 55 active cases of COVID-19, including 36 students and 19 staff members. The number is down 4 from yesterday, and down by 10 from the same day a week ago. 340 students and staff have recovered, and 1,030 are in quarantine or isolation, including 919 students and 111 staff.

The number of isolations or quarantines is slightly lower than both yesterday (1,055) and a week ago (1,035), and has remained remarkably level for the last three weeks. Metrics for the system remain unchanged, with green for all indicators except custodial staff and substitutes, both of which remain in the red zone. Austin-East High School remains the only school currently on virtual-only learning.