Major New Project Will Reconnect the Fabric of Downtown 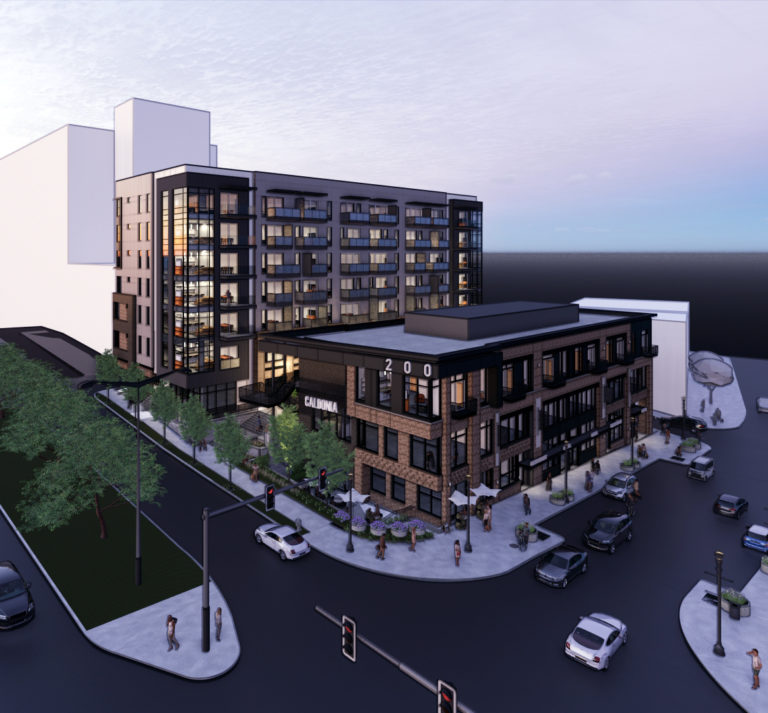 Aerial View of Caldonia Pass from the Southeast

In a very significant development for downtown, Hatcher-Hill Properties has introduced a project that will restore the western side of the 200 block of Gay Street. The combination of residential and commercial buildings is one of a handful of projects that have included ground-up construction in downtown’s current resurgence. It will likely be the first ground-up construction to begin site-work on Gay Street. Architectural planning is being supplied by DIA, whose renderings are included here.

The 200 block of Gay Street has been missing since the 1970s when Summit Hill Drive, an oversized suburban boulevard, destroyed the entire blocks at the heart. The five-lane gap formed one part of an urban chasm that later included a large parking lot bounded by Crowne Plaza, Summit Hill, Gay Street, and Vine. The gap has hurt businesses on the 100 block as it is difficult to tell from the corner of the 300 block that there is more life ahead.

At the beginning of this century a fifty-year lease on the parking lot was awarded to provide parking for Sterchi Lofts. It was a logical and, perhaps, necessary move at the time, but it appeared to prevent any potential for redevelopment of that block half a century. While no one might have imagined in 2000 the empty lot would ever matter, it became problematic over the next decade.

The situation changed in January 2019 when the land became available for potential redevelopment when developer Leigh Burch agreed to give up the lease in exchange for the right to purchase the lot up the hill on Vine across from Crowne Plaza and the Immaculate Conception Catholic Church. In a double win for downtown development, Burch and partner Daniel Smith announced in June of 2021, that they would develop Capitol Lofts on the former Vine Avenue Parking lots.

All the movement allowed for an RFP for the parking lot on the 200 block. While some reviews and approvals remain, the winning project, Caldonia Pass by Hatcher-Hill, is moving forward quickly. The group must go before City Council, County Commission for consideration of a request for a TIF, and the Downtown Design Review Board for design approval. Each of those steps will happen within the next two weeks.

The name for the project is a reference to Caldonia Johnson, more commonly known as Cal Johnson, born into slavery and likely Knoxville’s first black millionaire a hundred years ago. His Lone Tree Saloon was located on the western side of the 200 block and was closed with the advent of prohibition. The buildings on the western side of the 200 block were removed in the early 1980s. For a deeper dive into what once existed along this side of the block, please take a detour and read John Weaver’s excellent article on the topic.

The current two-building project includes forty-nine condo units which will be sold, and four work-force apartments which will be rented. Additionally, 22,000 square feet of commercial space will be included and will likely host two large restaurant spaces on the corners of the block beside Summit on one side and Vine on the other. Additionally, a mix of smaller spaces could include additional restaurants or other retail.

The three-story building facing Gay Street, reforming the 200 block, will include additional commercial spaces between the restaurants. The second floor of the building will also be commercial space facing a privately-owned, publicly accessible plaza to the rear between the two buildings. The top floor will include condos facing Gay Street. While nearly all the residential units have balconies, this third floor is significant because these will become the first residential balconies to overhang Gay Street.

The plaza between the two buildings will also include commercial space on the first floor of the second building, making an additional commercial corridor in a space like Market Square. The area will include outdoor seating and will likely be the site for events and live music. The second, or rear building, will be seven stories tall, with residences above the first-floor commercial space. At seven stories, it will be shorter than both the Crowne Plaza beside it and TVA Towers across the street.

The residential units will include a mix of studio, one bedroom, and two-bedroom units. There will also be two three-bedroom units. Sizes will range from just over 500 square feet up to around 2200 square feet. Prices could change but are currently projected between the $200,000 range and the mid-to-upper $800,000 range. The fact that these units will be for sale is significant for downtown as the market is currently extremely tight (I count two condos currently available and not under contract in all of downtown.) and recent developments have focused on rental apartments. It’s a harder project to finance, particularly without presales, but financing has been secured by Hatcher-Hill.

Mr. Hill said they have given great thought to making certain the two buildings integrate with their respective neighbors. The three stories facing Gay Street are more similar to the buildings on the 100 block of Gay Street, while the rear building moves upward toward its taller neighbors. Further, he said the entire project is based on “getting people curious enough to cross the great divide,” or to reconnect downtown.

He made another significant point regarding development. This $27 million dollar project is taking place on a half-acre. In a suburb a similar amount of residential and commercial development would require about 22 acres of land for the same economic impact to the city this half acre will provide.

Further, the suburban development would require the city or county to extend utilities, roads, and other infrastructure, whereas the infrastructure is present for this project, saving taxpayers’ expense relative to less dense development. Parking for residents will be offered via an agreement with Crowne Plaza whose parking garage is immediately behind the largest building included in the project.

Hill hopes dirt will be moved starting in October, though that could change. Once construction begins, he expects the project to take two years to complete, leading to a hoped-for completion date of October 2024. He doesn’t expect the construction to result in significant or extended closures of any of the surrounding streets.