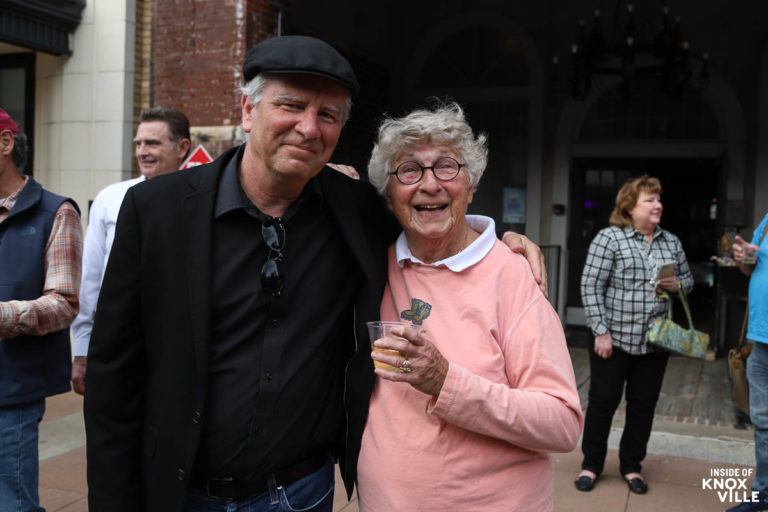 Me and P, Final Blessing of the Pansies, 100 Block Gay Street, Knoxville, March 2022

Over the years I’ve written profiles, sometimes in the form of remembrances, to the range of characters that make downtown Knoxville the place that it is. One of those people has decided to move on down the road in the RV she bought several years ago. Always full of surprises, this one may be the most surprising. P, it would seem, would stay in Knoxville to the end. But when you think P will zig, she zags. It’s her way.

Patty Smith (P to everyone downtown) was born in Knox County and lived most of her life here. She was a long-time P.E. teacher, owned a farm, a sign business, and still owns a local building. It was at that building, 800 Tyson Street, now the home of Remedy Coffee and Paysan Bread, that I first met her in 2014. I was a downtown “veteran” by then, with a whole five years of living downtown. I learned that P had lived on the 100 block of Gay Street since 1993, sixteen years before I made the move. I was jus a downtown baby. The article I’d intended to be about the building turned into an article about this singular person.

I attended my first Blessing of the Pansies at her home a couple of months later. That event was the fifteenth annual rendition of the celebration of the little flowers. The celebration grew out of the 2000 presidential election. As the days drug on with no decision made as to who officially won, P grew sick of the whole affair and decided the world needed a little joy. Hence, the celebration of the pansies in her window box. Steve Dupree has blessed them every year, but that first year I attended.

After that event, I saw P often on downtown streets and, as everyone who knows her will attest, she always had a story (or three) to share. Well into her seventies, she was always looking for something interesting to try or, if not, was railing about some recent injustice she was inclined to correct. Once I stopped to chat and learned that she had begun driving for Uber because she thought it would be interesting. Another time she said she’s bought and RV and was striking out.

She fought the earliest downtown battle over dog poop and gained an ordinance requiring owners to pick up after their pets. She relished telling the story of the judge’s wife who got the only known ticket and the officer was cheered by a trolley full of tourists. She was also fond of telling a story of how an unnamed “citizen” took it upon herself to paint curbs downtown to rearrange parking to her satisfaction on her street. She also fought the city over parking tickets, telling me once she owed nearly $1,000, mostly because it was hard for her to walk from a distance with groceries. She eventually settled the bill.

Most recently, I’d heard she was moving (and saw the excellent farewell by Betty Bean at KnoxTNToday.com), when I once again ran into her on the street, holding court with some tourists. She’d just moved the last of her things out of her condo, except for a couch and her bed. As we often did, we wound up having a drink across the street. She told me she’d had an epiphany, realizing she didn’t need to keep fighting the ever-changing parking situation. She put her condo on the market for a crazy price and got a higher cash offer before she showed it.

She’s moving to Houston part of the year to be near her sons. The other part of the year she’ll be in the Cajun RV Park near the casinos in Biloxi. She’s made friends there and says if she can have a beer along the way, she’ll be happy. I might add she’ll need (and always find) an audience. She said with her newfound condo-fortune she was going to splurge and get a new cover for her Ipad. She’s getting a nice leather one.

She said there would be one final Blessing of the Pansies and she wanted Urban Woman and myself to come. She explained there would only be one couch and it would hold “three skinny people or two fat people.” We attended and Dupree gave the final blessing, extoling the lessons we might all learn from the humble pansy. Cheers were made with champagne on the street, as pansy blessings are exempt from local alcohol ordinances. She gave pansies to us all and we said our goodbyes.

I saw her a couple more times as she wound down her affairs. She proudly showed me her “new” hubcaps. She was quoted $100 apiece to replace the scratched-up wheel coverings and thought that was ridiculous. She bought a can of silver spray paint and took care of the scratches herself. I’m sure they sparkled as she drove out of town toward new adventures to the south. She will be missed.