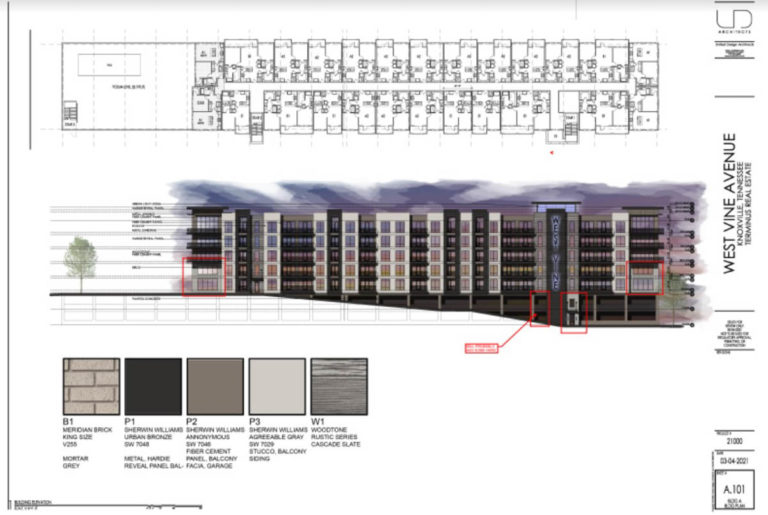 The name comes from the fact that Knoxville was once the capitol of Tennessee (and today is Statehood Day!) and Leigh Burch, a member of the group developing this site (which also includes Buzz Goss and Daniel Smith), said they wanted to acknowledge in the naming. The spot is near the top of the hill in what is currently a parking lot across from Immaculate Conception Catholic Church on Vine Avenue.

The story starts with the lot at the bottom of the hill in the parking lot bounded by Summit Hill, Gay, and Vine, and adjacent to the Crowne Plaza. Twenty-two years ago, Leigh secured the lot for fifty years to serve as parking for the then newly developed Sterchi Loft apartments (they are now condos). Leigh explained that the only way to get financing for a project like that at the time, it had to include parking.

As downtown development grew and property became more in demand, parking seemed less logical for the spot. While he was not compelled to let the lease go, he felt the parcel near the top of the hill could serve his needs and he negotiated a property swap with the city. He gave up the lease on the lower lot in exchange for being able to purchase the upper lot, both of which were managed by KCDC.

He said in some respects the hillside seemed easier to develop. He said the slope itself does present challenges and, as an example, he said they’ve recently learned they will likely have to use a caisson supported foundation, adding a half million dollars or more to the project. That said, the shape of the parcel is “longer, a rectangle, and is more usable.” The construction will also take place on a quieter street with less traffic, which will make it somewhat easier.

“I always try to stick to what I’m good at,” Burch said, “and multi-family (development) is probably at the top of the list. I don’t really want to go to other markets. It’s hard enough when you are present. The idea that I could walk to another development from my office (Terminus Real Estate)” was appealing. “I don’t have the luxury of buying properties to sit on.”

The parking on the hill, currently available to Sterchi owners, will be partially subsumed by a structured parking garage at the base of the building. He points out that the one hundred units have never had one hundred spaces. It will involve displacement of those parkers for the year-and-a-half of construction. He points out that, when completed, it will be more secure. The garage will have 175 spaces, while there will be about 130 units in the new construction. He feels there will be residents who do not own cars. He said he sees Gay Street being limited to pedestrians eventually.

There will be two floors of parking and the first floor of the parking garage will be exposed on the east end, but underground as the hill slopes upward toward the west. He said the project has demanded several changes, such as commodity prices shooting up. He said when the design is finalized, he could see the closing on a loan and the beginning of construction coming rapidly. The work is being completed by United Design Architects and construction will be handled by Merrit Construction.

As you move up the hill, there are separate entrances to the garage, with an entrance to the first, self-contained level, followed by an entrance to the second self-contained floor. Balconies will extend over the parking garage from the units above. At the western end of the building, a lobby entrance will also lead into a commons area, with a pool terminating the structure at the highest point on the property. The pool will be above grade and will have transparent sides allowing the view of the church from below to be as unobstructed as possible.

“I feel like the best amenity of the property is the pool.” He said he spent the last two years focused on the design of the pool and says he largely designed the project around the pool. “In the summer, the pool gets much longer sunlight by being on the western end of the property . . . Even though there is no zoning that says you can’t block the façade of the church,” he felt that was important. The view toward the north will be beautiful at night with the lights in the valley.

He said the design of the units will be contemporary and “smart.” He said they will have open floor plans but will also feature large closets. In the earliest phases of downtown development, he said, “closets were an after-thought. We were just scrambling around to make little boxes work. We’ve really learned a lot and gotten better.”

There are five stories of residences rising above the two levels of parking. Currently there are 122 units planned, though he said that could be raised to as many as 130 to defray some of the additional foundation costs. The majority (around 80%) are one-bedroom. He said they are easier to rent and, should they be sold eventually, they are easier to sell. He pointed out that condo construction involves much more risk as the market can turn south and the project can be lost.

The focus will be on smaller units, with about fifteen studio apartments and about the same number of two-bedroom residences. He hopes some workforce housing will be included, but the final number will depend on costs of the project. He has a goal of ten. He pointed out that Stockyard Lofts, currently under construction by some of the same developers, includes ten workforce housing units out of the 152 residences being built.

To be considered workforce housing, rent is limited to a percentage of local income and must be affordable to moderate to middle income earners in the area and be within a close distance of employment centers. Leigh said, “A one-bedroom unit that would rent for $1,500, right now, would rent for $983, or 50% below market.” He said, as far as he knows, he and his partners are the only ones who have tried to do so downtown. The discrepancy is more pronounced for two-bedroom units, with a market rate of $2,200 per month vs. $1,100 per month. He pointed out that costs do not drop for these units.