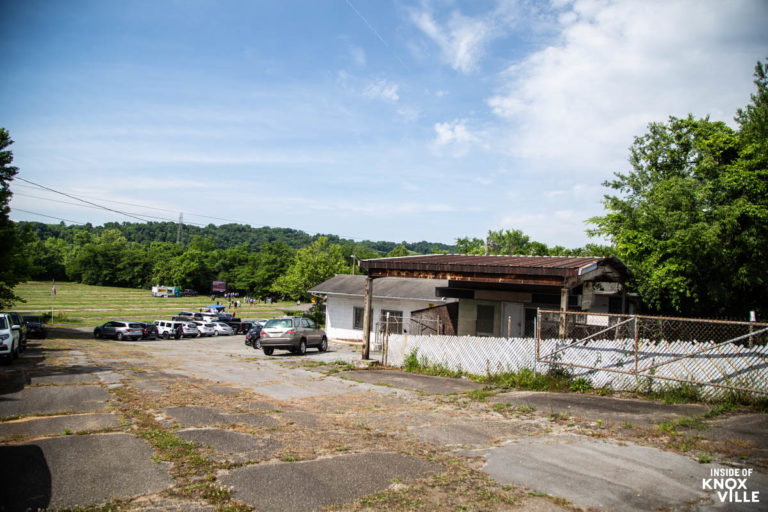 This development might seem an odd topic for coverage on this blog, as it is ten-to-twelve minutes outside downtown. For me, the hook was the shuttle from downtown, though the impact on touring musical artists choosing to come to the area will likely have an impact on downtown. Visit Knoxville estimates its impact in 2022 at $5,000,000 dollars in local expenditures including hotels and restaurants.

Located at 6010 Asheville Highway (think far out Magnolia Avenue), the site was originally the River Breeze Drive-in, first opened to the public in June 1950, seventy-one years ago. The screen was sixty feet tall and eighty feet wide and hotdogs were a quarter. There were two projectors, purchased in 1945 for $65,000 each ($800,000 to $1,000,000 in today’s dollars).

In 1970, the drive-in was modernized to include radio sound, replacing the speakers which had to be hung from car windows. By the early 1980s drive-in theaters had given way to modern in-door theaters and the River Breeze became a flea market. As of 2021, the 7.5-acre site, including 800 (or 880, there was some friendly disagreement) feet of Holston River frontage, will become River Breeze Event Center.

General Manager Aaron Snukals spoke at yesterday’s groundbreaking and detailed a list of amenities and attractions the site will include. He indicated there will be a state-of-the-art stage capable of supporting any touring artist. A beer garden will be located on the premise, with docks for relaxing and river watching. Infrastructure such as restrooms, green rooms for bands and offices will be added to the site. Pads with power will be in place to support a food truck park and to provide food for events. Massive infrastructure work on electric, sewer and water will be included. Three VIP decks will be built.

While the beer garden and food truck park will be open routinely, and kayaks will be available for floating down river to Volunteer Landing (about a half-day float, according to Jon Terry of Knoxville Adventure Collective which will manage the site), the focus of the site will be on events, including private events such as weddings (All Occasions is a partner). Programing is anticipated to include local and regional fundraisers for area nonprofits, music concerts and festivals, as well as fishing, golf, and RV shows.

Mr. Snukals said they anticipate a late fall start, with their first full season coming in 2022. He thanked Visit Knoxville, without whom he said, “we would not be here today.” Parker Frost, a member of the group bringing the park to life said, “It is time to make new history.” He also said they will focus on concert audience sizes in the 5,000 to 7,000 range initially but implied they could accommodate crowds of up to 10,000.

As for the downtown shuttle, the purchase of a ticket to a show includes a free ride from downtown. Aaron described pickups at places like the State Street Garage, Market Square and the Old City at around 5:00 pm for concerts, with a return at around 10:30 after the show. He pointed out that the night will still be young, and the party can continue in the city.