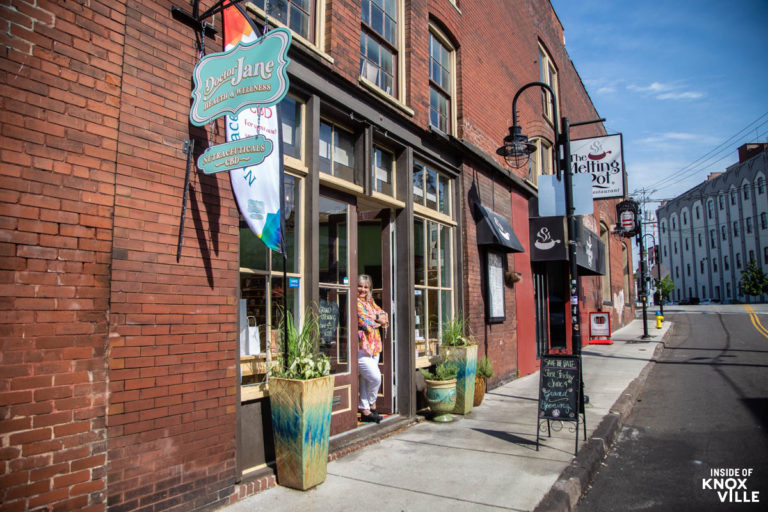 Just over four years ago, Dr. Jane George opened Body Mind Realign Chiropractic and Gratitude Bar at 111 North Central Street. By the time three years had passed, she had shifted the focus almost entirely to the chiropractic practice at the location and the retail was largely sidelined. During this time she also opened BMR Wellness Studio in Rocky Hill to offer her services in that part of town. Tomorrow she will open Dr.Jane Health and Wellness, a very different business, in the same space previously occupied by the Gratitude Bar.

In early 2020 she had begun a campaign for a seat in the Tennessee Legislature. The business was doing well and then everything changed overnight. She suddenly could not campaign in person and she closed the doors to both businesses at the end of February. She said she understood early that closures would be mandated.

She drew 37% of the vote despite the lack of campaigning and the fact that she was running against a well-known incumbent. She says she had a “great experience,” and learned a great amount. “I had an opportunity to talk to a lot of amazing people that live here in this district.

During the pandemic she realized how many people needed support. For her patients, she did not feel there was a good source for quality CBD products being administered by a doctor who could assist in finding the proper CBD and helping determine proper dosages. She found herself answering many questions about CBD and its use for “pain, stress, and insomnia.”

When she practiced in California, she had a lot of experience with medical marijuana for use with her patients and had a large amount of information that was transferable to CBD. She has attended CBD conferences and learned as much as possible. She points out that people go for the largest dosages they can find if they have severe anxiety, and that may be precisely the opposite of what they need.

She also says there is a quality issue, with over 80% of the hemp-based products sold in the U.S. coming from China. China, she pointed out, has quite different regulations for use of chemicals on the plants. There also may be a variance in quality. She said if your product does not have its place of origin on the label, it is from China.

She said you also want to make sure it is thoroughly tested. She pulled a binder to show me the multiple pages of test data behind each product she sells. She sells flowers and she showed me the data on those. The data also reveals the percentage of other chemicals present in the CBD. She also has all the information on the turpenes, which is important to many people who are serious about CBD usage.

“So many people are looking for ways that they can support their bodies and they are going to big box stores or grocery stores” and buying over the counter medications. All the nutraceuticals she sells are pharmaceutical grade, meaning they must be sold on recommendation of a doctor. She said the difference in her products and similar over-the-counter products is the same as the difference between an over-the-counter pain reliever and a prescription pain reliever.

Realizing that people were looking for ways to support their bodies and were interested in CBD and other holistic products, she began to consider the best use of her downtown space. As 2021 began, she realized that downtown had survived what appeared to be the worst of the pandemic and that people were going to continue moving into the area. Seeing the void in pharmaceutical grade CBD and other nutraceuticals, she began to consider how her space might meet the need.

She has products to support various bodily systems, including “brain health.” She gave an example of a woman who has been able, in working with both Jane and her regular medical provider, to improve her clarity of thought, reduce her anxiety and discontinue some of the drugs she had previously taken.

She has products for sexual health and for support of athletes. She has a line of products for supporting canine health. “We’re a dog town!” The products include CBD infused peanut butter for pets. Even the sunglasses you find are selected for not only their style but for their “full spectrum UV” protection. She carries a line of vegan sunscreens, all of which are mechanical, not chemical.

As you enter the shop, you will see banners sporting positive thoughts. She said they will change every season. “There will always be new motivation when you come in. I want this to be a place that people come to feel good . . . I’m here to listen and to help and guide.” Customers who make a purchase can sign up to buy the products online.

She will also have Frog Greishaw’s local, organic Kombucha. She is also carrying Vive Organics out of California in the form of little shots (like you drink, not like you get poked with). She has shots of turmeric, ginger, and electrolytes. She chuckles and calls the later “hydration-nation,” and said she will have people walking around the Old City selling this hangover antidote to the partiers either for consumption during the festivities or to save for the next morning.

The grand opening will happen tomorrow night in conjunction with First Friday. Doors will open at 6:00 pm and there will be a raffle for CBD products. The grand opening will continue through the next day. Current hours for the new business are 3:00 pm to 9:00 pm, Wednesday through Saturday. Patrons are requested to wear masks.

In the meantime, check out the website to learn more about the business.