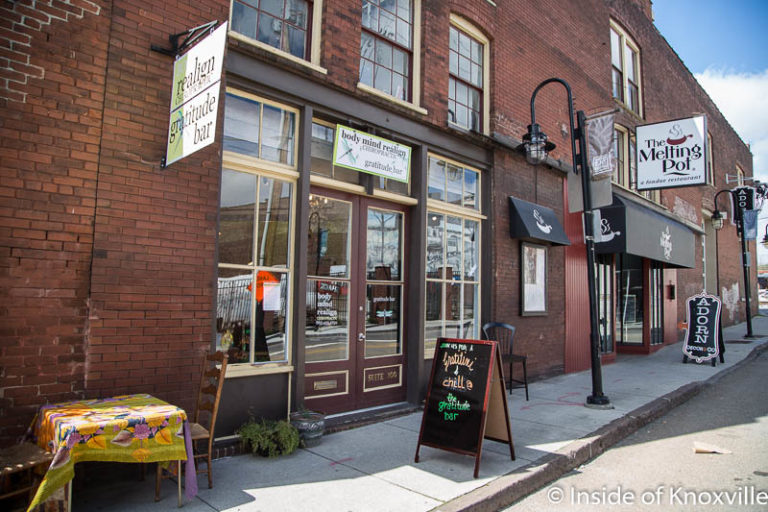 A small space at 111 N. Central – which is on a closed block for the moment – has opened for business as Body Mind Realign and Gratitude Bar, adding to the range of services and goods quickly increasing in the Old City. Part chiropractic office, part retail and part natural oils served up in a martini glass, it packs a lot into its few square feet. Just a short trolley ride (my favoritie Green Line) from uptown, or a pleasant downhill walk takes you just a few feet past the center of the Old City to the front door.

A small table and chairs sit on the sidewalk, inviting pedestrians to move past the intersection. Once inside, music is playing, and an array of colors greet visitors off the street in the colorful shop. You’ll meet Dr. Jane George, DC who will warmly greet you. With a personality that fills the space, after a few minutes, you’ll feel as if you’ve known her for years.

Some of you actually may have known her for years as she grew up in Knoxville, graduating from Bearden High School before attending UT on a Grace Moore scholarship “for professional studies in the Bachelor of Music degree program in voice.” She left early to pursue a career as an actor and singer, eventually settling in Los Angeles where she raised two sons, among her other pursuits. Aiden Moore, her oldest, is a musician, with work represented on numerous television shows and his 2011 CD, “Good As New.” Her youngest is film director and writer Nathaniel Katzman who last month debuted his latest effort, “10 Days for Now,” at the American Film Institute in L.A.

During her years in L.A., Jane worked as a doula at a time there were only three in the city. She attended U.C.L.A. in premed, receiving her undergraduate degree in Biology. She shifted to a Ph.D. program in Research Biology, conducting studies in the Andes and the central California mountains. She left ABD because she realized she wanted a personal practice. She obtained her chiropractic degree at the Cleveland Chriropractic College in Los Angles and has practiced since. She becomes the first chiropractor in downtown Knoxville outside of the Lindsay Young YMCA.

She sees the discipline as being about supporting the body naturally. It’s a practice in functional medicine, looking where M.D.s might not attend, looking for natural solutions to what is blocked or out of line, including detoxifications, probiotics and the use of minerals to, “give the body support and balance.” It’s all about keeping the body aligned which, she notes, is the same goal as yoga. “Every part of the body takes signals from the brain and I clear obstructions to those signals.” She can “adjust the old-fashioned way,” she says, but she also uses, “ultrasound interferential current, myofacial work and Faktr Rapid Release Therapy. Resetting “firing patterns in muscles,” she points out, can improve everything from your golf game to basic mobility.

As if that isn’t enough, she’s also a certified hypnotherapist. It all fits together, she says, saying, “It’s really lifestyle management. It’s about happiness.” She says the other orientations of care; osteopathic medicine, homeopathic medicine, herbal remedies and more, are becoming more accepted. She’s also combined her careers, teaching classes and doing workshops including, “The Anatomy of a Performer,” which she presented at the Lee Strasberg Theatre and Film Institute.

She returned to Knoxville last spring in order to be closer to her mother who was ill. She hadn’t been back often during her years away, but her memory of Knoxville was an exciting time when Kristopher Kendrick was saving buildings and the Old City seemed to hold so much promise. She actually sang in Annies, Lucille’s and Manhattan’s when she was a teenager and was delighted to get a spot so near those good memories. When building owner Jon Clark showed her the spot, she knew it was right for what she wanted to do.

And what she has done is quite a different hybrid of sorts. She wanted a concept that would pull people in, figuring the chiropractic portion will sell itself. That led to the Gratitude Bar portion of the business, in which she creates and serves “gratitinis.” The drinks are made of high-quality, organic, essential oils supplied from California. She mixes a drop or two into a martini glass andhe fills the glass with water she has charcoal filtered for three days, carbonates slightly and adds a touch of Indian sugar crystals.  The drinks are non-alcoholic. She also has martini glasses specially made for her by Matthew Cummings at Pretentious Glass. Each glass is stamped by Pretentious on the bottom and engraved with 37902. Customers  can have a drink and purchase the glasses, which are only available at Gratitude.

Expanding on the concept, customers will soon be able to purchase “Gratini Love Juice,” which will be made from her own recipes for which she will locally source cold pressed juices. She’ll also have hand-crafted almond milk. The juices will come in a variety of flavors and will be based on the Indian concept of “chakra.”

Beyond the glasses, she has a range of retail items unique to the shop and plans to expand her line. She has candles by Ianthe Mauro and her Objects with Purpose. The candles are wearable. That’s what I said: made of essential oils, once melted, they are to be rubbed into your skin. Jane’s offering, the Gratitude Candle, is only available in her shop. She has pocket angels, which are small pieces of pewter imprinted with angels, designed as gifts to encourage those who need it. You’ll also notice the “Love Dove” collection made by artist and fine jewelry maker Lori Innes who sells them in a shop on Montana Ave. in Santa Monica.

In addition to retail, chiropractic services and essential oil drinks, Jane also plans to use the space to promote local artists. She’ll feature one each month starting on First Fridays. The month is Knoxville artist Dawn Hawkins. April’s featured artist will be photographer Jeffrey Stoner who lives in east Tennessee and has published books of poetry,photographs and essays. Photographs from his, “Goats of Roan,” and “Wild Ponies of Grayson” series will be on display along with some of his sunflower photographs. Also featured, will be the glass art of Sam Meketon.

April 1,will be the grand opening. Upcoming special events include a workshop by Jordan Byrd, Knoxville’s only Pysanki artist who will teach batik and Celtic Knots. Tickets for that may be secured by calling 865-455-1750. First Saturdays will be “Close the Door” days from 1:00 PM – 2:00 PM. The doors will be locked an only those inside by 1:00 PM will get $4 Gratitinis and 10% off everything in the store. She’ll also do “Close the Door” parties for groups who request it.

So, drop in. Check out the merchandise, have a refreshing drink or get a full-body alignment. Play the guitar sitting in the corner and hang out. She’s open Noon to 6:00 PM Wednesdays and Thursdays, Noon to 8:00 PM on Friday and 10:00 AM to 2:00 PM on Saturdays. She may also open 5:00 PM – 8:00 PM on Saturdays. Chiropractic services require an appointment, which you may make for outside regular hours by calling or texting 865-455-1750 or make in person during regular hours.. In the meantime, give them a “like” and start following the Facebook Page.