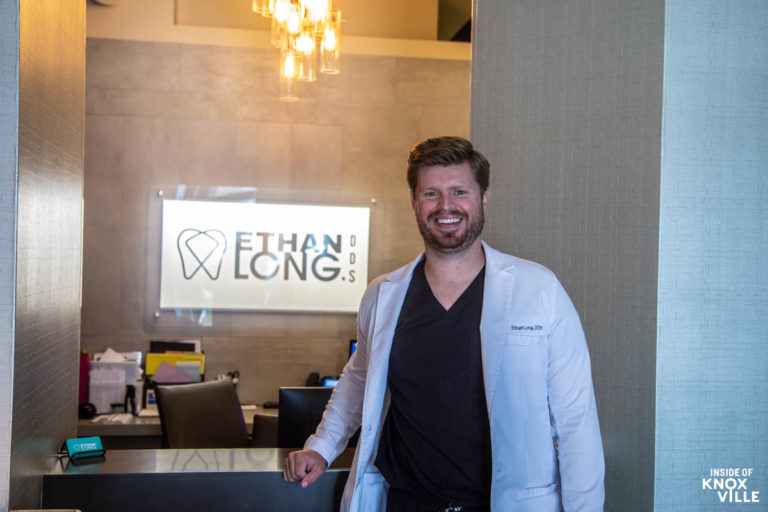 Not so many years ago, there were no dentists working in downtown Knoxville. Buzz Nabers was the first to open a practice and in the wake of his exit from downtown, two dentists are now operating on Gay Street, including Ethan Long, located in Naber’s former dental office at 305 South Gay Street. He opened for business in January.

Raised in Halls, Ethan graduated from Halls High School. His mother is a dental hygienist and his grandfather was a dentist practicing in the Halls community. He said the dentist his mother worked for when Ethan was a child, offered a number of opportunities for him. He allowed him to hang out at the dental office as a child. By the time he was a teenager, he was pretty sure he knew what he wanted to do professionally.

The doctor took him to a Remote Area Medical Clinic and “assisted chairside doing some extractions.” Learning what dentistry is really about, he described as a “discovery process. Getting to assist chairside was a big motivator. It’s one of those things that your either going to know right then,” if it is for you. “For me, it was being able to help someone out. This person has been in pain for days, months, weeks, and now they’re not going to be in pain anymore.”

He graduated from Halls in 2008 and from Carson Newman in 2012. He majored in biology and minored in business as a part of the pre-dentistry program. He said the program had a 100% acceptance rate among all students who applied to dental school. He attended dental school at U.T. Health Science Center in Memphis.

He values the fact that the program was hands-on from the first day. He said it solidified his passion. It also made the classroom work make more sense. He had considered specializing in orthodontics, but realized a specialty in dentistry means limiting the range of services a dentist is allowed to perform. “I liked the variety. As a general dentist we can do crowns, fillings, extractions, implants, orthodontics, periodontal surgery. I like being able to fit the need of my patients as they come in.”

In his first year of dental school he married Lourienne, who had dated from his second year of college. He graduated in 2016 and “came immediately back to east Tennessee.” He practiced in Kodak, Tennessee for almost four years before purchasing a practice in Maryville, which he opened in March, 2020. “I knew I wanted to stay in Tennessee.” The practice offered what he was looking for with a wide range of patients and procedures.

Of his new location on Gay Street, he said it never went on the market, but a group of downtown boosters reached out to him and asked if he would look at the office and consider opening a second location. They contacted him last September and he toured and they offered the space. They quickly made the arrangements and he began setting up at the location.

I asked about the impact of the pandemic, given that he opened his practice as it was starting and expanded during its height. “From the economic side, it had and still has an impact.” He said it hasn’t largely changed the way dentists practice. “We’ve always had this set of infection control guidelines and protocols that we follow . . . to keep our patients healthy and safe.”

He said as he opened the practice in Maryville, “marketing became a delicate process. Dentists were encouraged to shut down . . . ” He said they closed for four weeks and used the time to renovate the office. “Those months immediately following, I’m not only the new dentist in town, but it was taboo to encourage people to come in to the dentist. It’s still a little delicate.” They used it as an opportunity to educate patients regarding safety protocols. “It’s been a learning year, and that’s always a good thing.”

He said two months ago the practice began feeling like it was moving more toward a normal patient flow and this month has cemented that trend. He said he did have thoughts that opening a second location in the middle of the pandemic did give him pause, but “the numbers worked. You can’t be scared to follow a need. You hear about needs being in a rural area . . . statistically, we’re supposed to have one dentist for every 1,500 potential patients,” so clearly downtown continues to have a need.

He said he has already seen downtown patients who do not own a car. “I think Knoxville is starting to crest into an urban environment where you can make it without leaving downtown.” He also noted that many people frequent medical providers close to work, rather than close to home. Including downtown’s working population, the potential for needing dental help is greater. He said he is hearing that many downtown workers will be returning this summer.

The downtown practice is currently open two days a week, including Wednesdays from 9:00 am to 5:00 pm and Fridays from 9:00 am to 2:00 pm on Fridays. He definitely plans to expand the days and hours as repeat customers return, which would be in July. He said both locations have his full attention, but an associate will likely be brought on in coming months and they will determine at that time who goes where.

The downtown office currently includes a dental hygienist, an assistant and two receptionists. All dental services are offered at the downtown office, including extractions and cosmetic dentistry. Root canals are the only procedure currently being performed only in Maryville. That will shift in coming months.

He said he and his family came to downtown often when he was growing up. He said Gay Street has more energy than any other spot in the city. He said he had envied the practice every time he turned off of Summit Hill. He said he was shell shocked to be offered the opportunity to move into that office and is very happy to assume the spot.