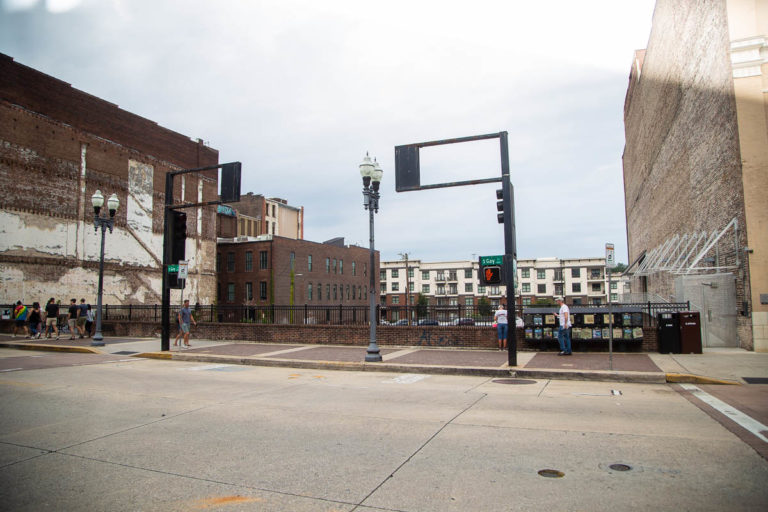 In a very significant potential development for Gay Street, one of the empty spaces dotting the corridor may soon be filled. A rezoning request was recently filed for 350 South Gay Street, which is currently a literal hole forming a parking lot between the Century Building (Chivo Taqueria) and Gallery Lofts (Mast General Store).

The gap has seen at least three iterations of buildings in its history, most recently the Bus Terminal Building located there was burned by an arsonist in 1974. Please read John Weaver’s excellent article on the history of the spot. It would be the first major ground-up construction on Gay in more than a generation.

I met with Shailesh Patel, owner of the property, and Joe Petre of Lawler Woods, who is helping guide the potential project through this phase to learn what they have planned. The zoning change, if approved at the September 9 meeting, would allow for a taller building to be constructed on the site, something they feel is necessary to make the project financially viable. Approval from the Knoxville/Knox County Planning Commission would send the proposed change to City Council. If approved there, the project would move into design phase.

Shailesh Patel, who built and owns the downtown Hampton Inn and the former Lord Lindsey. He told the story of the planned demolition of Lord Lindsey years ago and how he halted it when he learned there was resistance to the idea. The hotel project took shape in 2001-2004 with the help of Joe Petre, to coordinate with all the neighbors. “I really feel not a single person who was impacted felt something went wrong.

He also once owned the Temple-Pittman home and worked to preserve it as he built the Hampton Inn behind it, going so far as to establish a $100,000 grant to go toward anyone who purchased the property with plans to restore it. It was purchased by Brian Pittman. His father started the hotel business in 1976, and Shailesh has two sons working with him. “We don’t just churn out projects. We want projects where people around it say, ‘Wow, I’m glad that building is here’.” He started with those stories, he said, to illustrate that he has been involved in downtown business for years and intends for any of his projects to be thoughtful and well done.

Shailesh said he’s very excited about the location and wants to do a great project to complement the other great development that has happened in the area. They plan three levels of parking under the building, below street level, starting a floor below the currently existing parking lot. Entrance will be via Gay Street, adjacent to Mast General and the exit will be out the rear of the structure to State Street.

Plans call for a mixed-use development, including a hotel with restaurants or potential retail accessible to the public, as well as a bar on the top which would also be available to the public. Also potentially included would be office space and a small number of condos. While the property was expensive, Mr. Petre pointed out that the fact that two levels of what will be the garage have already been excavated making the project more viable.

The parking would allow hotel guests and others to have on-site parking without a surface lot and minimizing the impact on nearby garages. Mr. Patel pointed out that this was like the approach they took in the development of the Hampton Inn. There will also be no need for valet parking or guest drop-off in front of the hotel, minimizing the impact to traffic there. He pointed out that he was not required to provide parking for either project, but feels it helps by minimizing the impact of additional automobiles and providing public parking during the day. If the rezoning change is approved, he’s hoping to provide around 150 spaces.

The current zoning would allow a building on the site to be 125 feet tall, which is about 12 stories. The hope is to go several stories above that. If the rezoning is approved, further study and design will determine how tall they ultimately build. He hopes to go another four to six stories above the twelve. The city staff has recommended approval for the rezoning.

Given that new construction would not include much height with each floor, the building would be similar in height to a twelve-story historic building. It is also important to note the guidelines would require the building to be set back by ten feet above the third floor, forfeiting some square footage on the upper floors. There is also a carved-out portion for access to gallery lofts, which is currently a metal walkway to the elevator and the design must accommodate that access.

Mr. Patel said he intends the first floor to include the entrance to the garage, roughly straight across from Wall Avenue, and a small hotel lobby. The larger portion of the Gay Street facing floor would be dedicated to commercial space adjacent to the Century building. This could be retail, restaurant, or other commercial space, depending on demand.

At the roof level and perhaps the top floor a restaurant and bar would be included. The breakdown of what is included between would depend on the rezoning and what comes out of the design process which would follow. The bulk of the floors will be designated for hotel rooms, and he hopes to have around 150 rooms with limited condos and office space. “It will be another building that can really showcase the views of Knoxville.”

He said the process following approval, if it is given, will not be fast. He pointed out that he took four years to get the design correct for the 85-room Hampton Inn. While he doesn’t anticipate taking that long on design for this project, he expects a year to two for design and additional approvals. Mr. Petre is optimistic that approval processes will flow more easily and quickly in the future, as Mayor Kincannon is assembling a group to look at just that. Mr. Petre is a member of the group. He said that Harold Canon, the city’s Director of Engineering, has already made a positive impact.

Mr. Patel said he does not see construction starting before 2024. The construction will take another two years. He feels this gives time for downtown to absorb the hotel rooms that have been built. “It will be something very nice, very attractive, very pedestrian-friendly.” He again referenced the Hampton Inn, which he pointed out could have had a less expensive exterior but has simulated limestone on the first floor façade and brick above that. He plans a similarly attractive building on this site. He said his company does not build to sell, “We want to have a building that is functional, fits the neighborhood and looks attractive.”