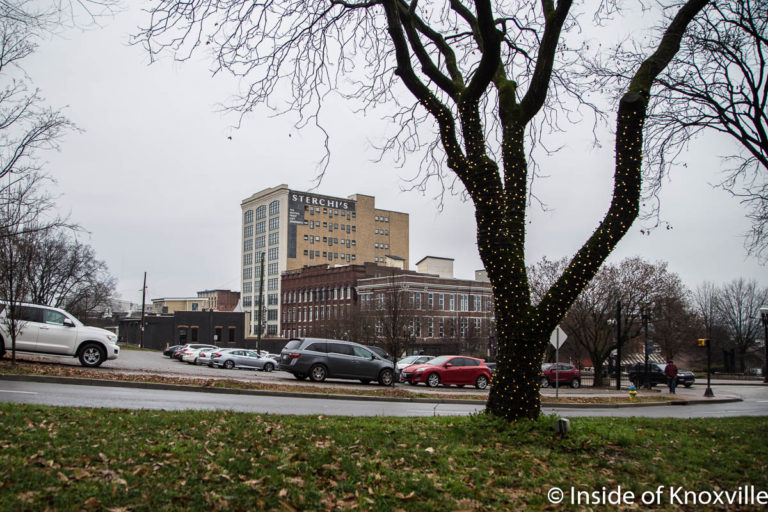 It’s something we’ve talked about on this blog for years as a missing piece in the downtown development equation: the missing 200 block of South Gay Street. Once a thriving connector packed with businesses, the construction of Summit Hill, and other decisions resulted in the demolition of those buildings, leaving the 100 block of South Gay Street isolated between the suburban roadway and the rail yard.

On the east side, a small strangely-shaped pocket park remains, thanks to the curve in the four-lane road. On the west side, next to Crown Court, sits one of downtown’s ubiquitous parking lots. That parking lot has generated conversation for years regarding its potential to re-connect the 300 block to the 100 block by having something in between that encourages pedestrians to wander further afield from the Market Square center point. Once connected, an easy turn of the corner would lead to the Old City.

The difficulty in making something happen on that spot began eighteen years ago when only the most optimistic downtown supporter could have imagined the environment we have today. At the turn of the century, downtown had shown little sign that a corner of any sort had been turned to returning downtown to the vibrant place it had been a half-century earlier.

In 2000, Leigh Burch purchased Sterchi Lofts. It likely seemed like a lark for many, including banks, to imagine filling it with apartments. He built 100 units which, until Marble Alley remained the largest residential project in downtown history. In order to secure financing and to convince people to move into the mostly abandoned center city, he had to have parking and demonstrate that it was going to be available for a long time. Enter the parking lot on the 200 block.

Mr. Burch negotiated a fifty year lease with KCDC, the housing arm of Knox County and the city of Knoxville, beginning in the year 2000. He completed and filled Sterchi Lofts in 2002 and its residents have parked in the lot since. He is in the process of converting the apartments to condominiums. Given the fifty-year lease, it seemed unlikely the parking lot could be developed before 2050.

That changed last week when it became official that Mr. Burch has relinquished his lease and has purchased the parking lot toward the top of Vine, near Immaculate Conception Catholic Church and behind Crown Court. Residents of Sterchi will begin parking there within the next month. KCDC regains operational control of the parking lot, opening the opportunity to investigate potential uses.

Leigh says he’s had conversations for years about the possibility of releasing the lot and he and Ben Bentley, Executive Director of KCDC, have been discussing a solution for the past year. They reached a deal at the end of 2018 that resulted in the release of the previous agreement. Leigh says his crews have been working on the parking lot up the hill, clearing trees that had encroached and he plans to re-stripe it right away. In the end, there will be more spaces up the hill than there are at the corner of Summit Hill and Gay.

To explore what might happen next, I talked with Ben Bentley who confirmed there will be a Request for Proposals, which he hopes will be issued in the next six months. He expects there will be public input and he wants to see the best use for the spot. Whether the RFP will be broad — invite developers to create their best visions — or more narrow — carefully define what must go in the spot — is to be determined.

He pointed out that any project will need to add to the greater community good, but also has to be financially viable. In that regard, the market will have a great impact on any plans, which is why he wants to get the process underway as quickly as possible, while market conditions are still relatively strong.

While KCDC manages affordable housing across the county, that would not impact the use for this development. I asked about the possibility of work-force housing and he said that would be a good thing, but is also impacted by the market and whether a project can be developed which includes it and is still able to remain financially viable.

He said working with Mr. Burch was great and that while the parking lot facilitated a great development nearly twenty years ago, times have changed, and now the best use for this spot is for it to be developed. In a real sense, those early, crazy developments, like Sterchi Lofts are what ultimately created the environment which allows us to do better today than we could twenty years ago.