Electronics in the City: Digital Zombies 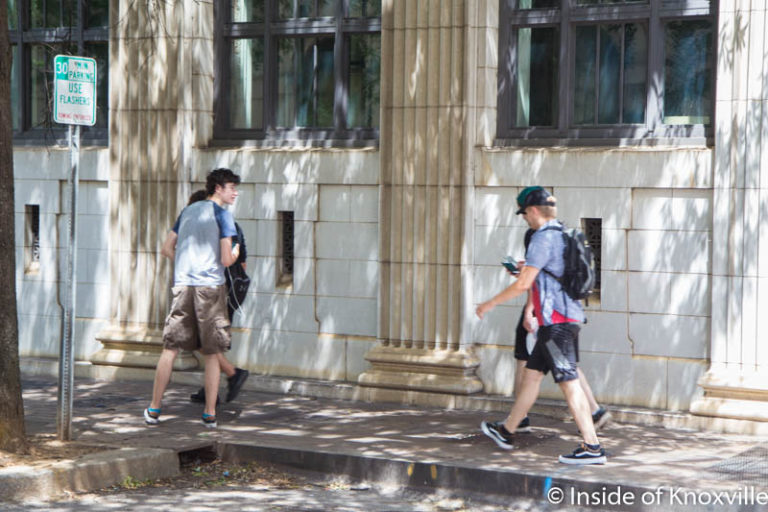 Sometimes I wonder what cities were like before our lives were taken over by electronics. I should be able to remember that era, but it’s hard. It’s probably a genie in the bottle at this point, but wouldn’t it be interesting if we could carve out no use or low use zones? Maybe I’m the only one it bothers, but I doubt it. Sometimes I’m the guilty party.

It started with televisions. Remember when you first saw a television in a restaurant? It was odd. And in those early days, it was usually one television and the sound was on. Now the sound is mostly off, but they visually assault us from every direction. With the exception of sports bars where they are the point, what is up with that?

It’s a rare restaurant without a television. I’ll pick a restaurant without one every time I have a choice. But I have to be honest: that bobbing, popping, snapping, ever changing picture will catch me every time. If there are words scrolling along the bottom, I cannot keep my eyes away. What if I missed something, right?

Of course, cell phones have taken it to another level. We’re all guilty at some point of forgetting we are in an actual place and losing ourselves in our phones as we google the age of an actor we thought was dead or check twitter in case the president has tweeted at us or Kylie Jenner has a cute new meme and we might be the only one who hasn’t seen it by 10:30 AM. Oh, and we haven’t checked the news in twenty minutes! What if something has happened in Kuala Lumpur?

I get it: We’re all busy. Why not check our email while we walk to our next meeting? Well, maybe because you are walking half speed on the sidewalk without realizing it and the rest of us would like to get to our meeting. Or your are weaving all over the sidewalk or stopped completely on the sidewalk, completely immersed in digital land, far, far away.

And don’t get me started on all the drivers I see downtown (some of whom have nearly killed me) while holding cell phone in one hand and using the other to steer while they run a stop sign while looking in the distance for the friend they are supposed to meet. Excuse me for being in your crosswalk!

The worst, in my opinion, was when the Pokemon craze hit. Talk about your walking digital zombies! Simply strolling a downtown sidewalk became a hazardous activity. Phones held in front of them, running as rapidly as possible, the hunters or whatever they call themselves were completely oblivious to anyone who might be pursuing something of a normal walk about the city.

Another current electronic craze and one that has been around for a good long time, but seems to have become ubiquitous is the ear bud stroll. There’s still more than a little casual conversation to be had on the street in downtown Knoxville where small town meets mid-sized city, but it has changed. Now quite often I speak to someone only to realize they are plugged in. It always feels like I’ve inconvenienced them to have a conversation. When did that turn happen?

The worst recent electronic invasion, in my (more cranky than I realized) opinion, is the small ear piece that suffices for a full-on telephone. Now, we’ve always had people walking around downtown carrying on conversations with people who weren’t there and that still happens. The people using these little devices come across in precisely the same manner. Now it’s hard to determine: real friends or imaginary? And I don’t really like hearing the conversations in either case.

Some of these thoughts started with this Washington Post article. It’s a couple of years old, but I’ve kept it book marked and thought about it from time-to-time. It turns out that some New York City coffee shops were killing their wifi. As the author noted, sometimes you go into a coffee shop these days and if you talk to your table-mate, you almost feel like you are interfering with the people around you who are working or playing on their laptops. You might even get a dirty look.

What they found happened when they killed wifi was that people didn’t camp out on the tables (more sales as tables turn!) and people actually . . . wait for it . . . talked to other people. It was almost like the social gathering place once known as coffee shops. One set of shops even offered conversation starter cards. Put one on your table in front of you and it serves as an invitation for a stranger to sit down, answer the question and start a conversation. It even worked sometimes!

I know, it’s the whole genie in the bottle and I’m just as likely as anybody to be buried in my phone or laptop in the coffee shop. Still, it seems worth the effort to give some thought to how electronics are hurting the social order in little ways not always obvious. Maybe we could all just try to look up occasionally. We might be surprised at what we are missing in the real world while we chase the digital universe.