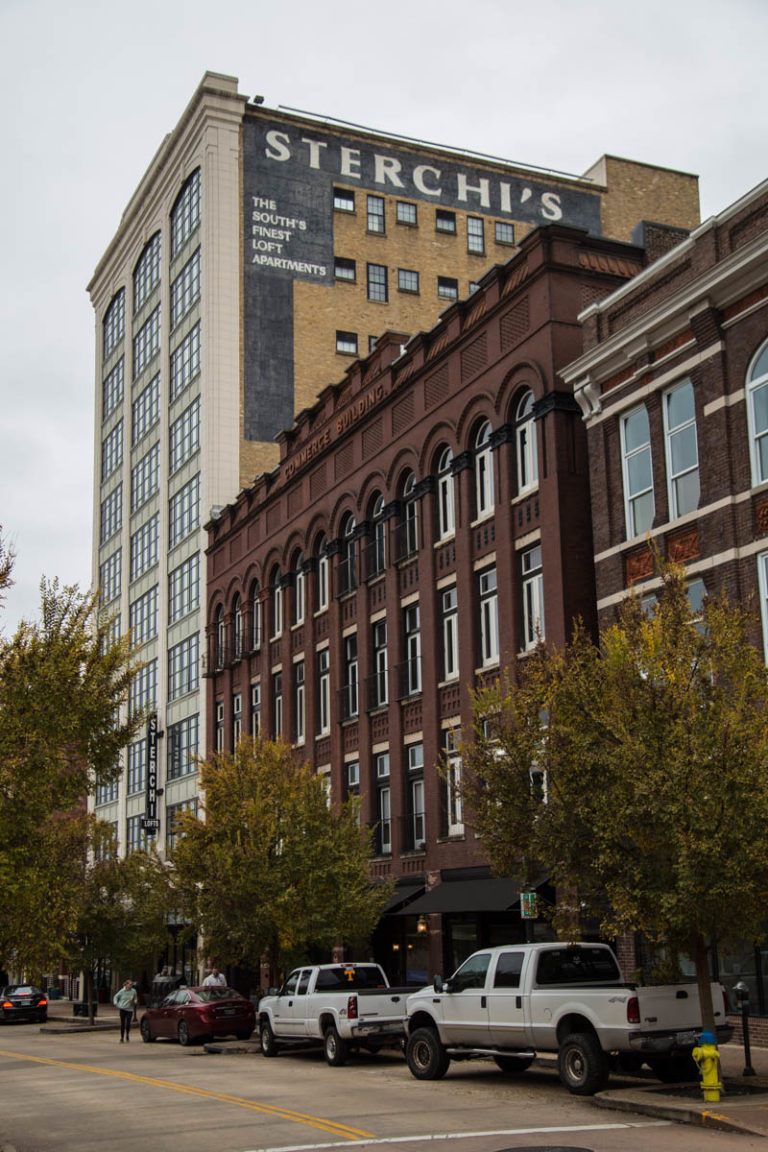 Building owner and developer Leigh Burch has announced that Sterchi Lofts will be offered for sale as condos. Burch bought the building in 2000, well before downtown’s resurgence, and opened the newly developed units as apartments in 2002. He says at the time financing was near impossible as it was, by far, the largest residential development in downtown, at 100 units — a distinction it held until Marble Alley opened in 2016.

Burch, who also developed Commerce Lofts ten years ago, says he’s wanted to do this conversion for a long time and feels the time has come. “It’s such a great structure,” he says and notes that it needs updating after sixteen years, but to do that and retain the apartments would require financing and moving everyone out. Instead, he plans a slow conversion to condos.

“People here are catching up with the rest of the world in understanding you don’t need so much space.” Given the smaller sizes of some of the new condos, he’ll be able to introduce a significant number of condos to the downtown market. “We can offer some small 900 square foot two bedroom units for the 200’s vs 400s elsewhere in downtown.”

The available condos will include one bedroom units like the model unit pictured here for the 190s because they are smaller. It opens the market up, “to a larger demographic who can buy.” Noting that this building was the catalyst for much of the downtown residential development, he says the building has three amenities not found elsewhere downtown.

First, a rooftop deck will be available to all residents. It was closed ten years ago, but now he’s spending $100,000 to bring it back and make it better than before. Second, residents will have a parking space. Finally, the fitness center you see pictured here is open to all residents.

The fact that the building has been fully occupied and generates revenue relieved some of the presure to have as many resales before they’d finance the conversion. They allowed a minimum of 20 presales and anticipated three months to reach that number. It took only two weeks. (An important distinction: the units can’t close at this point, but are being reserved.)

Residents were offered first opportunity and several reserved a unit. That, plus word of mouth, prompted the reservations of the units. As leases have expired and residents didn’t renew, their units began the conversion. The bulk of the renovations will be after the loan closes, meaning early next year will mark the first closings. Condos will gradually be available for closing in the following months. He feels the gradual closings will work well for buyers, tenants and the owner.

While the building was originally constructed on a tight budget for finishes, Burch is returning to the finishes and upgrading. Though he’ll not be doing structural changes, he’s investing money into each unit and into the building. In addition to the $100,000 in improvements to the deck, he’ll be improving the lighting outside and in the lobby.

He’s in process of changing out all the AC/Heat units in the building, replacing the large, aging and inefficient units with energy efficient split-units. They are quieter and use far less energy. They also are significantly smaller, yielding more closet space. The units will also get new electrical systems, improved bathrooms with higher-end fixtures and new, more efficient toilets. New tile and LED light fixtures will be installed throughout and washers and dryers are included.

In addition to being LED, the new lighting is a very different look, in the form of light disks. He’s adding quartz counter tops and high-end, deep sinks and new, better quality appliances. New cabinets are an option for buyers and wood flooring and doors are also available. Each unit, as noted above, comes with parking, in-building storage and fiber optic connections.