Santaland Diaries Plays Around the Darkness on the Edge of Christmas 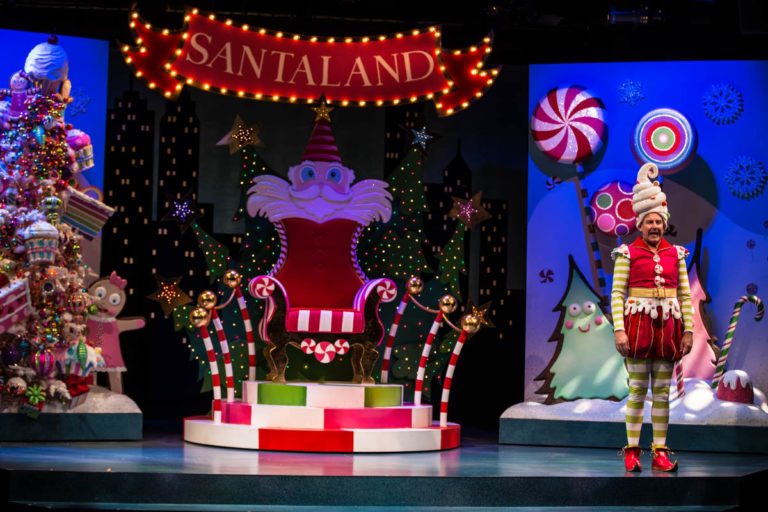 Christmas is all lightness and joy, right? Good will to men (and presumably these days, women). Joy to the Earth. Santa is coming and all is well. He may be checking his list, but we’ll get a pass and a big pile of presents in the end, right? Right?

Well, meet Crumpet, the focal elf in David Sedaris’ The Santaland Diaries. The unlikeliest of elves. An unemployed stoner who came to New York City with hopes of becoming a star and attending glamorous parties. Three weeks in, he’s broke and when a friend dares him to apply for a job as an elf in Macy’s Santaland, he does it on a lark.

The lark gets more serious as he is shocked to pass the drug screen and finds himself under serious consideration for one of the positions. He says in the interview his hobby is whittling which apparently sounds like a perfect elfin hobby, even though it was a lie — unless you consider that one bong he whittled as a hobby.

What follows is a hilarious look inside what, seen through jaded eyes, is a very strange world of relentlessly happy elves, serving up Christmas for the children of New York City. Crumpet, of course, has a hard time following the elfin manual and free styles a bit as he makes up more entertaining lines to feed the children and their parents.

The play is based on an essay by humorist David Sedaris who actually worked as an elf in Macy’s Santaland. The essay was the first bit of success for Sadaris and has become an NPR staple (hear him read excerpts here). Given the success, he lengthened the piece and, eventually, Joe Mantello adapted it to a one-man play. It has since become a seasonal favorite.

In the Clarence Brown Theatre production, staged at the Carousel Theatre, the role of Crumpet is in the able hands of David Brian Alley who has been featured in many CBT productions over the last nineteen years. It’s a heavy lift to carry an entire play without a supporting cast and Alley does it very well. Whether the moment calls for physical humor or rests on a simple facial expression, he fills the bill and delivers the laughs.

It must be noted that the play is not for those among us with the most delicate sensibilities. This would include children and any adults who are easily offended by relatively graphic content. When Crumpet takes you on a tour of the seedier elements of Christmas, he’s not holding back.

The production, which began last night, runs through December 9, sharing billing with A Christmas Carol here, for a time. You’ll find tickets for either production (or both!) .