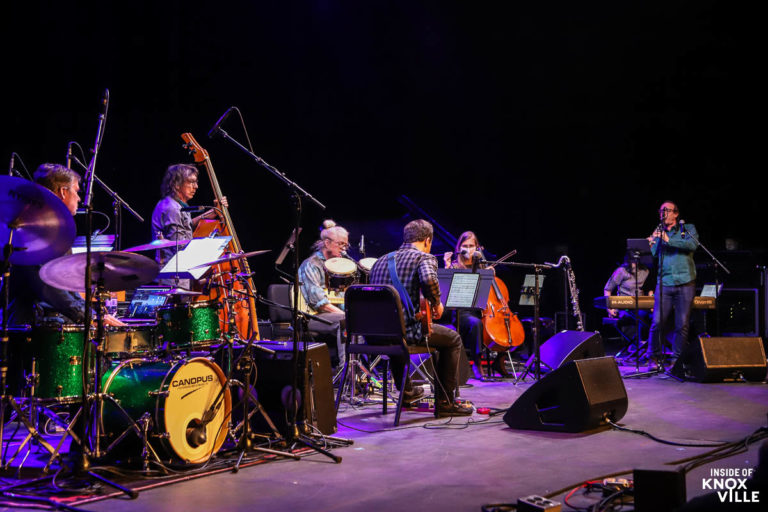 Should you have stumbled onto this article without reading the others, the series began with Big Ears Festival 2022: The Festival Begins, followed by The Fun Keeps Rolling, and Poets and Parties.

The final day of Big Ears always comes with a bittersweet flood of exhaustion, sadness, relief, and a glow that lasts beyond the final note. This year felt special to many of us because of the loss of joy and relationship we’ve all endured in some way or another over the last two years. While a pandemic persists, this was, at the least, a lull in which we experienced some of the joy and connections we’ve been missing. It made the moment matter just a bit more.

By Sunday, I’m ready for a quieter, slower pace and I found it, starting with pianist Stephen Gosling performing John Zorn’s 18 Studies from the Later Sketchbook of J.M.W. Turner at the Bijou Theatre. The performance, the music, and the venue were perfect. The piece is far more than a quiet piano interlude, with lots of jagged-edged moments, but all-in-all a perfect start to my Sunday.

Slipping from one theatre to another, I moved to the Andy Shauf show at the Tennessee Theatre. I’ve included a red photo of the concert to show what we actually saw. The entire concert was drenched in red light. It served to obscure truly seeing the artists and every photo would have looked like that one had I not converted the others to black and white. Why Andy?

But then, there was the music. Comparisons have been made to Paul Simon and they are apt. His incisive, observational, often conversational lyrics are both singular and inspirational. I said to a friend as I exited that listening to his music made me want to take up song writing again. Simple, yet difficult to execute. His music also reminded me of Paul Simon. He’s the artist I’ve listened to the most since the festival ended.

I picked up on the poetry thread from yesterday and sat in for a set by the Cornelius Eady Trio, which is four people and is now the Cornelius Eady Group. The poet is a National Book Award and Pulitzer Prize nominated Professor at the University of Tennessee.

From there I walked to the Old City Performing Arts Center, which is a cozy venue I greatly enjoyed during the festival and hope to return to soon for a theatrical performance. The performer in this case was solo clarinetist Evan Ziporyn, who performed clarinet solos of 1960s and 1970s pop songs tracked with his recorded clarinet accompaniment. Of much more interest to me was his performance of Best Out of Three, a lost piece by Philip Glass. Written over fifty years ago, this was its first public performance and it was shimmering.

I walked to the Tennessee Theatre for a final time to hear perennial festival favorites Bang on a Can All-Stars. The group performed Terry Riley’s Autodreamographical Tales. Riley intended to appear on stage to perform the dramatic readings — which are narrations of dreams he recorded —  but he was unable to attend. The vocal duties were taken by guitarist Mark Stewart. The entire experience was as mesmerizing as, well, a dream. The music was great, of course, but the telling of the dreams was remarkably written. It struck me as quite impressive that a composer would articulate dreams in such a compelling manner.

I ended the night and the festival at the Old City Performing Arts Center with George. This was the inaugural performance by the group made up of renowned musicians in their own right. The group delivered a magical performance in a jazzy pop style of songs from their George sequence. Songs were dedicated to a range of Georges, from Foreman, to Georgia O’Keefe. While the topics might be a bit tongue-in-cheek, the music was not. It was a pitch perfect ending to a great festival. We’re very fortunate to have it in Knoxville.