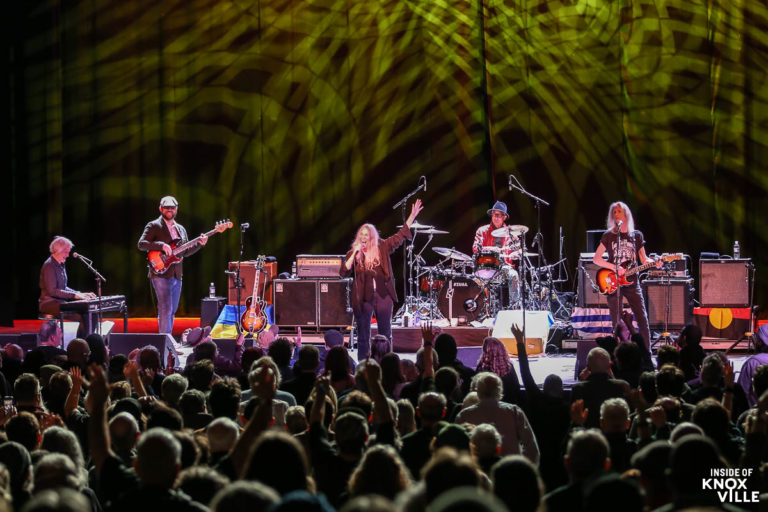 In a joyful way, I’d say the outside world disappeared for me on Friday. For all the world, that ten hours of music on Thursday felt like the weekend had started. Friday seemed like it must be Saturday, but then, what did it matter? Seeing friends I haven’t seen in two years, striking up conversations with new acquaintances, hearing amazing compliments of our city, and hearing great music formed a perfect anti-dote for everything we’ve all been through.

I took the morning to do some non-Big Ears business and started my twelve-hour journey just after noon with 75 Dollar Bill at Mill and Mine. The group can veer dramatically between familiar sounds and random noise as if the two are friendly, if rival neighbors. Group co-founder Che Chen plays guitar with wild abandon one moment and carefully controlled skill the next. His cofounding partner primarily pounds on a box, but may at any moment make percussive sounds with a wide range of seemingly random object. The result is a joyous sound perfect to kick off a Saturday at Big Ears.

For the follow-up, I caught the very different In Place at the Pilot Light. Pilot Light is a great place to catch a show (anytime!) and the venue tends to become part of the show, with the small stage, small seating areas and often, well, interesting lighting. It’s a photographer’s challenge, for sure, but a fun place for live music.

In Place is a band formed during the pandemic. While they might be deemed improvisational jazz, this is improvisational for improvisors. Think metal pounding the strings of the double bass, which may or may not have clothes pins attached to those strings at the moment. Think screwdriver scraping the guitar strings. Jayve Montgomery on woodwinds adds his own crazy to the awesome mix.

I slipped back to Mill and Mine for back-to-back shows by Harriet Tubman and Damon Locks’ Black Monument Ensemble. The first was a musically heavy trio which could remind one of Living Color, which might not be a surprise in that the drummer helped start the band. All members of the group were well accomplished before joining to form the band.

After the intensity of both In Place and Harriet Tubman, it was fun to dance a bit to Damon Locks’ Black Monument Ensemble. Which is not to say that the music is light or that there isn’t a thread of message throughout, because there is. Leader Locks has worked his way through punk music and free-jazz reggae (hold those words in your head for a minute). With the death of Michael Brown in 2014, Locks changed directions and began incorporating civil rights spoken-word recordings into his increasingly funky, soulful music incorporating vocals and a large band. It reminded me in some respects of Kamasi Washington.

I settled in a bit early for Tift Merritt with Eric Heywood, enjoying the excellent set by a great singer-songwriter in a great space while her little daughter ran around the room. I also carefully balanced Smoked Salmon plate (my favorite go-to at Boyd’s), while sipping from a glass of wine situated on the floor by my feet, occasionally raising a camera to take a photograph. I appreciated the food and it’s a good time to give a shout-out to Good Golly Tamale for keeping me going when I needed it and to Brother Wolf for the meat and cheese tray and delicious glass of wine when I needed that to make it to the next show.

I ended my day back uptown in the big theatres. I started with the Patti Smith full band show, which felt like it could have been a festival concluding moment, but it simply marked midway. If she had any rust from the day before, she had shaken it off for the band show. No flub lyrics and her vocals are amazingly strong after so many years. At any full band show, Lenny Kaye on guitar is a major part of the proceedings and he was representing Knoxville well, first in a western shirt bought from Cowboy Phil and Julie at Pioneer House and ending the show in a t-shirt from Lost and Found Records.

The show rocked from start to end, with a pause in the middle to sing “Happy Birthday” to her tour manager, Andrew Burns. The power Patti has always brought to her music was on full display, though perhaps with less anger than in some of the early years and with a positive vibe for everyone. She had a Ukrainian Flag on the stage and lofted it at one point before draping it on the microphone stand.

I’d planned to follow that show by staying at the Tennessee Theatre for Kim Gordon. The theatre was cleared and, left to the streets, I searched for a bottle of water. Not so easy. The Market and Subway were closed. As they have before, Embassy Suites had me covered and that allowed me to stumble into their great Big Ears sign in the lobby.

Kim Gordon’s show was ultimately delayed by at least thirty minutes. After finally being allowed into the venue, we were kept in the lobby, then I made it to a seat only to have nothing happen. I gave up because I really wanted to end my day with a great laid back show at the Bijou featuring two of my (and perennial festival) favorites, Jason Moran and Bill Frisell, along with drummer extraordinaire Brian Blade and Thomas Morgan on bass. The show was a tribute to composer Ron Miles and was a perfect way to send the day right around midnight.