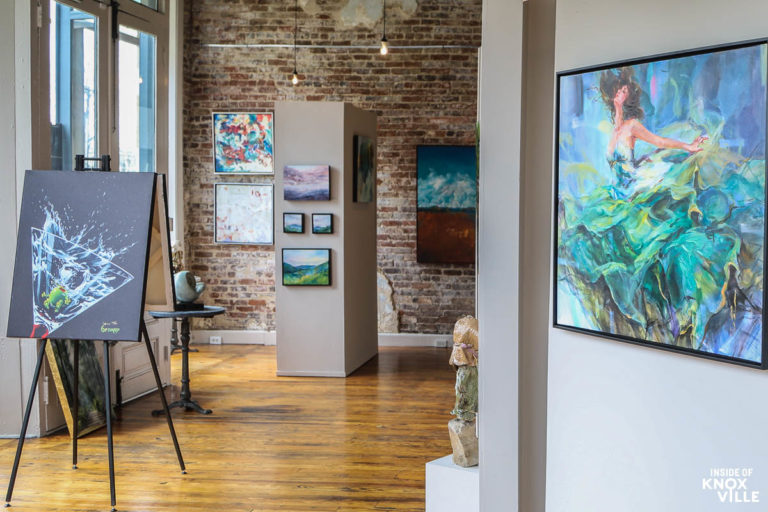 Pivot Point Gallery at 15 Emory Place will open its doors at 6:00 pm on Friday night for the first time. The stunning gallery, representing thirty local, regional, and national artists, is the creation of owners Don Stoner and Faith Ferguson (more about their backstory here). In just over two months since my original article on the project, the space has gone from bare to dazzling.

The artists (you’ll find an almost complete list here) represent a wide range of mediums including oils, acrylics, watercolor, mixed media, collage, glass (both cast and blown), sculpture, ceramics, 3-D art, marble, steel and cast bronze works, woodwork, and more. Divided approximately in thirds, with around ten local artists who previously had no gallery representation, ten regional artists, and ten national artists, the range of work in a relatively small gallery is striking. They range from early in their career to established.

Prepared to have a one-floor gallery, the couple was delighted to receive approval from the city for both floors to be occupied, giving them double the space they’d assumed they might have. They’ve accumulated more than enough art to cover the primary walls, and have art hanging in the bathrooms and upstairs kitchen, leaving much to be explored.

In developing the gallery collection, Don and Faith intentionally pursued specific national artists whose art was not represented locally, including Thomas Arvid, Michael Goddard, Anna Razumovskaya, and Kaiser Sudan. They did the same with regional artists they admire. Many of the local artists found them, though some they sought out themselves.

Some such as Shannon Deana Johnson are local, celebrated outside of Knoxville, but relatively unknown in the city because they have not been represented in a local gallery. Ms. Johnson does very well in a gallery in Atlanta, while another local artist, Jean Hess is represented and does well in a gallery in Key West, and is well known in Israel. Sculptor Bill Cook, Jr. is also well known outside the city, but hasn’t had gallery representation.

“There are another two dozen Knoxville artists” who Don said they would be pleased to represent, but there is a limit on space. They may look to add some later, but they feel they are full at the moment. They want to have rotation of what is available in the gallery, and they are always looking for art that is different from what they are offering. They try to limit the number of artists they represent who do similar work, like landscapes, for example, unless there is something particular that is unique.

The art is also offered at a wide range of price-points. Small pieces can be found for $100, while the most expensive work in the gallery is priced at $22,000. Don said that the most common range for pieces in the gallery is $1500 to $2000. He said there are probably no more than a dozen that are over $5,000. There are more than 230 works of art in the studio. “It’s a wide range of media, size, style, and price range.”

Faith said, “We feel we have something unique in the space, the art, and the history of the space. The gallery is also open as a small event space in the evenings, with kitchens upstairs and downstairs and catering arrangements secured. She said she wants the public to be in and enjoy the hundred-plus year-old building in ways in which they’ve never had the opportunity.

In a cool recent twist, they learned the building (prior to being a post office) was the Whittle and Sons Bag and Trunk Company. What made that discovery even more interesting was that they’d just secured a trunk made by the company before knowing it was made in the building. Expect to see it on display in the gallery. Don said, “The trunk found us.”

While the hours will likely evolve depending on interest and demand, initially the gallery will be open Wednesday through Friday, 11 a.m. to 4:00 p.m. and Saturday 11:00 a.m. to 2:00 p.m. They also offer private appointments, which simply means if you call and you want to see the gallery at a certain time, they will make it happen if they can. They also said when they are in the gallery working outside those hours, they will put the sign out an open the doors. They will be open through the evening on First Fridays.

At the grand opening, guests will be able to interact with as many as fifteen of the artists and discuss their works. There will be live music, hors d’oeuvres and a cash bar. The Grand Opening Hours are 6 p.m. to 9 p.m. on Friday night.