Plans Updated and Changed for the AJ Building 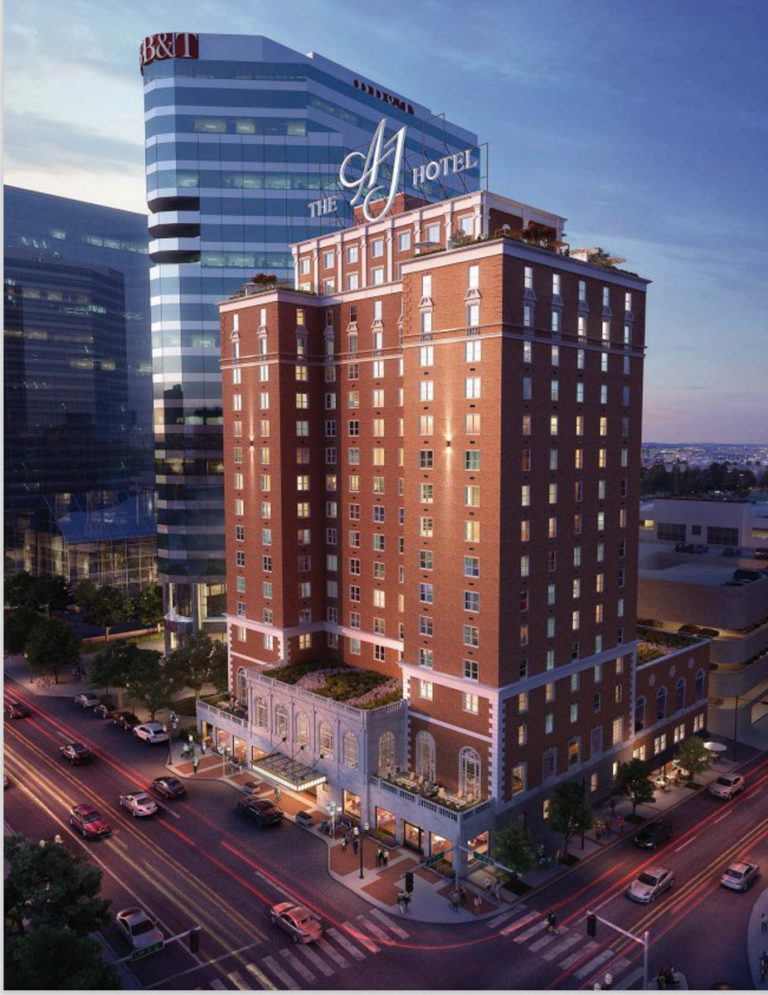 What a saga the redevelopment of the Andrew Johnson Building has been. In 2017, the contract for purchase and development plan was agreed upon by Knox County and BNA associates. Knox County Schools, which had housed its administrative offices in the building, struggled to find a suitable location to which they might move. Months turned into years and even after identifying their next location in the TVA Towers, the group didn’t begin moving until the summer of 2021.

During that interim, a global pandemic descended upon us and market conditions for hotels, to supremely understate the reality, deteriorated significantly. Hotel financing became near impossible. While the basic design of the proposed renovation remained the same, the plans for its used converted from 94 hotel rooms, 30 micro apartments and 45 standard apartments to around 140 apartments only.

The county accepted the economic reality, but was not pleased with the shift, wanting to see a hotel in the location. Assuming the Knox County Schools would quickly vacate and all remained stable, the new completion date was set to land somewhere in mid-2023.

And then the world changed further. On the slow side, Knox County Schools have still not completely vacated, so the contract hasn’t closed. On the good side, the supply chain issues improved and the labor shortage eased. The most stunning reversal came in the form of the resurgence of hotel occupancy generally and in downtown Knoxville specifically.

According to business Partner at BNA, Philip Welker, with whom I spoke and who, along with Ethan Orley heads the project, that resurgence has been so strong, both in rates and occupancy, that market studies conducted by the group resulted in a reversal once more. The latest plan goes beyond even the original plan, which included 94 hotel rooms, and calls for 169 new hotel rooms in the building. 143 of those rooms will offer an extended-stay format with small kitchenettes. The Andrew Johnson, now to be known as the A.J. will, once again, become one of downtown’s beautiful historic hotels.

The other plans for the building will persist, much as they were envisioned at the beginning. There will be a roof-top bar, though its focus has shifted to jazz. The current name for the bar is Ivories and arrangements will be made for routine bookings of a range of jazz artists.

The remainder of the plans are still in tact, with the exception noted below, including the fitness center, ballroom, bistro with patio to the side of the building, and conference rooms. The lobby has been moved forward into the 2,000 square feet at the entrance of the building and it will include a bar, where live jazz music will also be scheduled. It will include the greenhouse and patio on the building’s north side. To the south of the lobby, a 12,000 foot retail space will be offered on the corner of the building.

The second level, which originally included the lobby, will be expanded to include the ballroom and will become a 13,000 square foot restaurant and event venue. Live music will also be featured here, bring the total to three venues for live music. There will also be two private function spaces for up to 150 people in each.

As basic internal structural plans have remained unchanged, when the final offices are vacated and the contract is signed, which is anticipated in June, construction should begin immediately and should be completed in about 18 months, baring another pandemic or international crisis. McCarty Holsaple and McCarty are architects, while Denark Construction will serve as general contractors. With luck, the hotel should open sometime around the beginning of 2024.