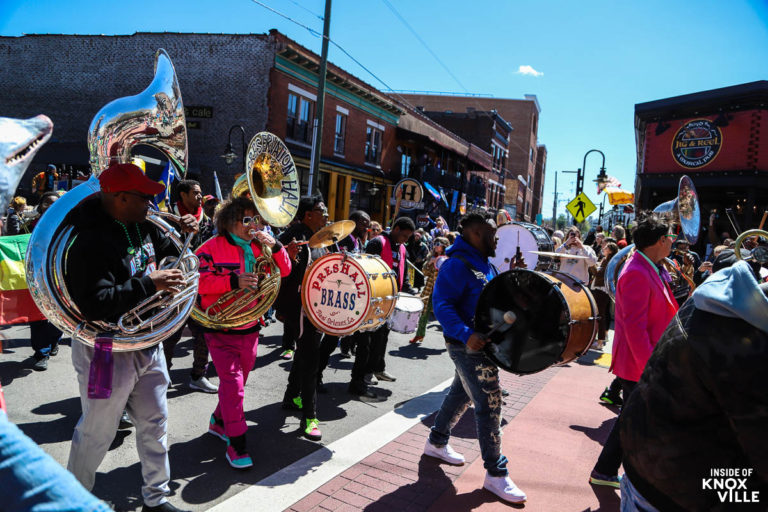 Day three of the Big Ears Festival can be the day that fatigue sets in. I’d spent 22 of the last 48 hours listening to music, walking nearly 11 miles in the process. But I was pumped. Some of my favorite artists and events were ahead and they did not disappoint.

I started with a poet I have loved for over 40 years. When I first fell in love with her work, I was a graduate student at the University of Florida, 500 miles away. I heard her read there and at once fell in love with her and was unsettled. That’s what Nikki does best: She makes us just a little uncomfortable. When I moved to Knoxville soon after finding her, I had no idea I was moving to her hometown.

I wish the “reading” at Mill and Mine, which started my Saturday, could have been filmed. It was vintage Nikki, with her hour reading including very few poems and long monologues about everything from slug penises to aliens, with a lot of social commentary in between. She said “trans kids” (and I assume she says “kids” because that who she teaches in college) are the wave of the future. Why you ask? Because when we finally meet the aliens and the rest of us are thrown by their differences, trans kids are going to shrug and say, “cool.” Of her performance, suffice to say, we laughed, we cried, we exulted in her presence.

The Big Ears Festival is about, among many things, shifting gears rapidly. I moved from poetry to the first party of the day: the Krewe du Cattywampus Parade and Street Party. The Preservation Hall Jazz Band, Sporty’s Brass Band and others from New Orleans to Haiti to Knoxville joined in the fun. There was jazz, all manner of creatures, a giant Nikki Giovanni, giant Dolly Parton, giant, Martin Luther King, Jr. and much more.

It culminated in a street party that featured some of the above performers, thousands of revelers for the free event, and other performers such as east Knoxville’s own Drums Up, Guns Down with drummers and dancers mostly from Austin East High School. They rocked the crowd.

Near the end of that performance I had one of my sweetest moments of the festival when a young boy, maybe six or seven years old, backed up to me and stood against me. I was concerned I would startle him when he realized I wasn’t whomever he thought I was. His mother saw him and called him over and apologized. No need. Best snuggle of the festival. I took their photo, which is in the batch below. If you know them, let them know that I’ll happily send them the photo.

After that portion of the day’s party, I switched back to poetry with Saul Williams at the Old City Performing Arts Center. Known as a multi-media performance artist, this even was a quiet reading of his work. He played a bit with the audience taking questions and responding sometimes seriously and sometimes playfully. For Williams, the words were all he needed to move and challenge the audience and the hour quickly disappeared. You can read a sampling of his poetry here.

I took the long walk from the Old City to First Baptist Church for back-to-back shows with Leyla McCalla and Ellen Reid. It was good to know that at the end of the walk I could take a rest on comfy pews for to (relatively) calm performances and rest a bit. I’d partied earlier and was going to end the day with a blow out, so I needed to pace myself.

Both performances were exquisite, though quite different from one another. Leyla McCalla who found acclaim for her musical settings for Langston Hughes’ poetry, was also a member of the Carolina Chocolate Drops for a season and now lives in New Orleans, but has explored her Haitian roots through music and documentary. Here she performed the Hughes compositions with Chatterbird, a Nashville-based chamber ensemble. The songs danced through classical and folk connections with ease and grace. The poetry portion of my day concluded.

I first introduced Ellen Reid to my readers last fall in connection with her Soundwalk piece written for Ijams Nature Park. In that original article, you can learn more about Ellen and her work and a link is provided for you to download the app and enjoy the music as you walk the trails at Ijams. To hear the work of this Pulitzer Prize winning composer as a continuous piece in a different setting was nothing short of revelatory. The performances at Big Ears were the first public performances of the piece and the crowd was spellbound.

And so, back to the party! I walked the length of the city back to Mill and Mine for the Krewe du Kanaval, an immersive experience curated  by Ben Jaffe, creative director of Preservation Hall, as well as bassist and tuba player in the band. The night got off to a strange start, but it could not have been planned any better.

Soundcheck for one or more of the bands took far longer than anticipated, and the show was delayed by an hour or hour-and-a-half. The waiting crowd was shuffled into the courtyard beside Mill and Mine, where a tent was erected, tables were placed, and a small jazz combo (whose name, regretfully, I have not been able to determine, held the small stage.

As they played, the tent was slowly infiltrated by creatures from the Cattywampus Puppet Council, who began dancing and attracting other dancers. The band began circulating in the crowd as more people began dancing. Conga lines were formed. Everyone smiled and joy descended upon us. After some time passed, Sporty’s Brass Band, a second-line band from New Orleans marched into the tent claiming the aural space from the previous band. The roof blew off (figuratively, though with Saturday’s wind, it could easily have been literal). I haven’t danced so much in years.

Eventually, the band led the whole crowd into the Mill and Mine where a DJ (Congalese-Canadian DJ Pierre Kwenders) performed from high above the crowd in what could pass for a space ship. Dancing continued and Dolly’s massive puppet joined the fun. When the music began on stage, the crowd was rocking. Performances by the 79rs Gang, Lakou Mizik, RAM, and the Preservation Hall Jazz Band followed, each segued perfectly by DJ Kwenders.

All the fun, from the courtyard into the venue supplanted the Sparks performance for the most fun festival moment, at least in my experience. You get this stiff old stick-in-the-mud to dance and you have done something!

If there was a downside to the slow start, it was that the finish didn’t come until after 1:30 am. That is only a downside because the crowd was tired and had thinned dramatically by the time the Preservation Hall Jazz Band took the stage. Additionally, as you may notice, I had to convert their images to black-and-white because of the lighting and dry ice they used. I think it looks kind of cool, but I can’t honestly say it was simply a style choice.

You’ll find all the pictures below and I’ll send out one more of these articles before I collapse in a heap.