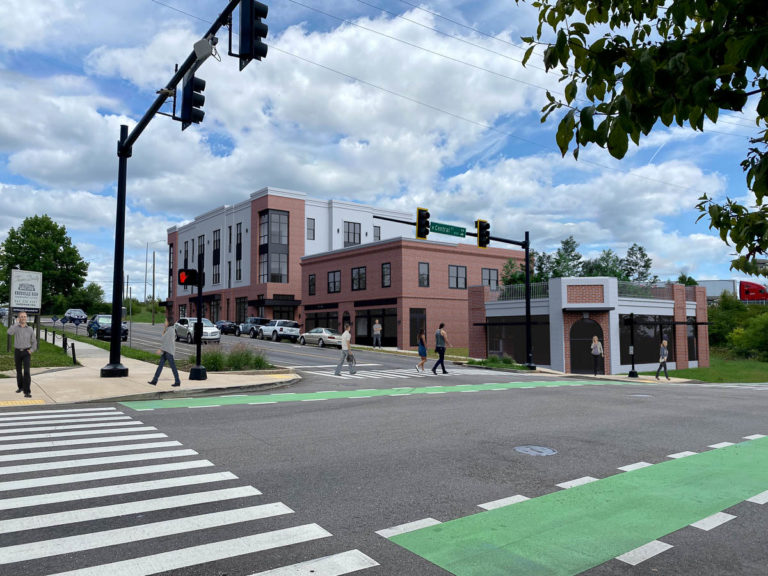 It’s been over nine months since my last update on 5th Avenue Plaza, a development on the 100 block of East Fifth Avenue that has grown into a three building project. Great progress has been made in the interim and an additional round of apartments should be available in late winter into early spring. The area has become increasingly popular over the last two years with Xul and Geezers Breweries opening across the street, as well as C.J.’s Boutique. It’s walkable to Crafty Bastard and Next Level Brewing, as well as the Gypsy Circus Barrelhouse. It is two blocks from the heart of the Old City.

The second phase of the project, which is currently underway, involves a newly constructed building at 112 East Fifth Avenue. It has now reached its planned height of three stories facing East Fifth Avenue, and five stories to the rear of the building. Included in this portion of the project is 3,950 square feet of commercial space along the street level facing Fifth Avenue, sixteen new apartments for lease on the second and third floors, and four two-story town homes for lease to the rear.

The sixteen units include both one bedroom/one bath apartments, as well as two bedroom/two baths. They include hardwood floors, tile backsplashes, high-end stainless steel appliances, in-unit washers and dryers, and custom walk-in closets. Included are twelve-foot ceilings and large windows. Some also have kitchen islands.

The four townhomes on the rear will be two stories each, with polished concrete on the lower level and hardwood above. They also feature twenty-two foot ceilings, large windows, and each have a private entrance. Each unit includes 777 square feet and are offered at $1,600 per month.

The final phase of the project will include an additional new building at 100 East Fifth Avenue. The one story building will include 1,000 square feet of commercial space at the corner of Central Street and Fifth Avenue, and will include a rooftop garden. The completion of the building will also form a courtyard between it and the older building, which will mirror a courtyard to that building’s east. Construction on this phase is set to begin “when the weather breaks,” which Nash suggested may be in Februray.

If you are interested in pre-leasing a unit, Rachal Brown is your contact person at 865-524-2525 via email. You can also complete an online residential rental application here.