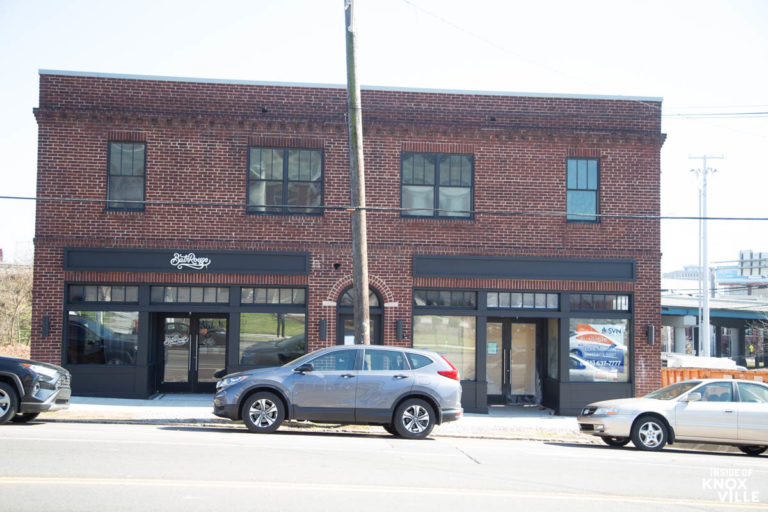 Last August I brought news that Jeffrey Nash was redeveloping a building and the land around it at the corner of 5th Avenue and Central Street, directly across from Knox High Senior Living. Portions of the project are completed, other portions are underway, and yet another part is in the process of a re-design. The tract has been named the 5th Avenue Plaza.

Central to the development is the 100 year old building originally used as commercial and residential space. It has been returned to its purpose and the four apartments on the second floor are leased. The bottom floor features two commercial spaces, one of which has been leased to an expanded Bat N Rouge (hopefully I’ll have more on that later). The second commercial space has drawn great interest and will likely be leased very soon.

To the east of the original building, Nash is constructing building with three stories facing 5th Avenue. The ground floor will include one or two commercial spaces totaling 4,000 square feet and the second and third floors will provide space for sixteen new apartments. The rear of the building will be four stories tall as a result of the slope and the lower two floors will include four two-story town homes.

Nash said that applications for apartments are running at a very high pace, with as many as seven applications for units coming in on a typical day. He said he’s speaking to people from a number of states who have decided to make Knoxville their home. He said he feels the many millions of dollars spent by developers and by the city is paying off in making the city a desirable place to live.

The two buildings will have a courtyard in between for use by residents or by the businesses. Parking will be provided for residents behind the building.

A change in plans is taking form for the space to the west of the building, adjacent to Central Street. Originally planned as a large courtyard or outdoor space to serve both the public and the businesses in the older building, Nash has shifted to adding a newly constructed building, pending permitting with the city. The single-story structure would front Fifth Avenue with a smaller area for a patio remaining. The 1,000 feet of interior space would be available for commercial lease.

He also plans to have a roof top garden with seating available for use by the business and the public. He said the rooftops are becoming quite popular in larger cities and he’d like to see the trend take hold in Knoxville.