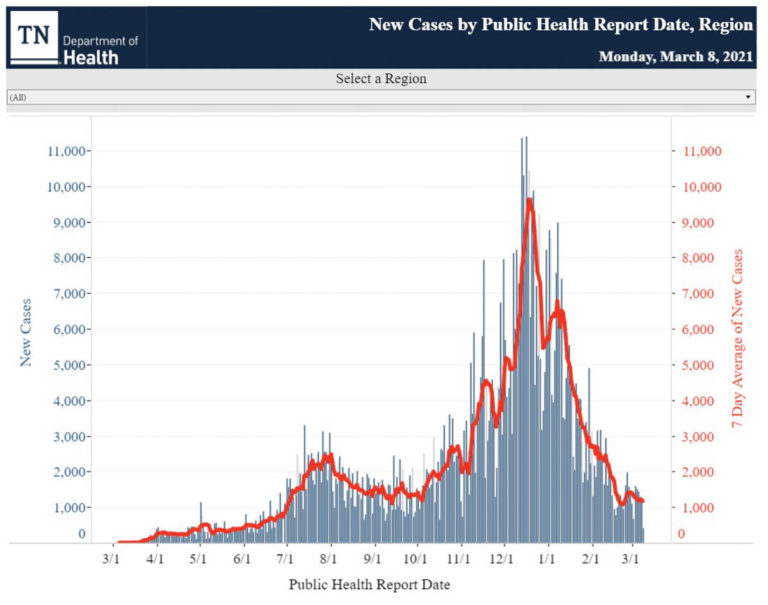 Vaccines are proliferating as is the sunshine. The daylight hours are growing longer, and we’ll get more of it in our waking hours starting this weekend. Case counts and deaths are at their lowest level in months. The CDC says we can hug each other (if we are vaccinated). People are seeing elderly relatives in person for the first time in a long time. Whatever may happen next week or next month, this is a moment to celebrate. Let’s not miss it.

The state of Tennessee reported 420 new cases yesterday, bringing the pandemic totals to 654,949 confirmed cases and 128,955 probable cases. While the low number is somewhat a result of extremely low test numbers for the day, it is still worth celebrating that this is the lowest number of new cases reported by the state for a single day since June 17 (313).

759,025 cases are considered inactive, while 13,323 Tennesseans are currently COVID-positive. After declining rapidly earlier in the year, the active number has remained in the 13,000 to 14,000 range for the last ten days. The state is averaging 1,173 new cases per day.

Hospitalization numbers for COVID-19 patients in the state also continues to decline.  Yesterday, 15 additional COVID-positive Tennesseans were hospitalized with the virus, bringing the state total to 18,885. The number currently in the hospital dropped another 22 to 713. The state provides hospitalization data only for the last three months (rolling), so the data for longer comparisons is limited. During that three months, however, hospitalizations peaked at 3,344 (January 6), making the current number a remarkable improvement in just over 2 months. ICU (203) and ventilated (120) COVID-19 patient numbers also continue to decline.

If there is an area in which we are really feeling the results of the early vaccination program, it is in deaths, as large percentages of the most vulnerable older citizens have been vaccinated. The state reported nine deaths yesterday, marking three consecutive days with less than 10 COVID-19 deaths in the state.

This is another remarkable victory worth celebrating, as the last time the state reported three consecutive days with fewer than ten deaths was July 4 – 6 (4, 9,7). A total of 11,556 deaths have been recorded in the state since the beginning of the pandemic. Tennessee is now averaging 19 deaths per day, the lowest the seven-day average has dropped since October 19.

The state reported just 4,048 tests for the day, about 20% of the 20% we’ve been running relative to pre-holiday test levels. Johns Hopkins University, which I noted yesterday had incomplete data from the state, didn’t report yesterday’s data. The drop in test numbers showed up in the state’s reported positive test rate, which rose to 8.03% for the day.

The state is reporting 1,648,092 shots of one of the vaccines have been given, including 221,458 over the previous seven days. This reflects a slight slowing from the 250,000 level the state had maintained for the last two weeks. It likely, however, includes J&J vaccines, meaning the number of Tennesseans fully vaccinated may have picked up pace, since it only requires one shot. 14.43% of Tennesseans have gotten at least one shot and 587,123 are fully vaccinated. The number fully vaccinated rose by about 6,800 from the previous day.

In state news, which has local ramifications, the bill sponsored by Farragut’s state representative Jason Zachary has passed the house and is in the senate. It would revert Boards of Health to advisory only and power would fall back to Dr. Buchanan in our local case. The previous version which would have given power directly to the County Mayor was amended.

The Knox County Health Department reported 13 new cases today. Please let that sink in. This is the lowest single-day case number reported since June 20 (9). As I said above, regardless of what happens next or whether testing dipped, this is a point for celebration. This brings Knox County totals to 40,376 confirmed cases and 7,317 probable cases. 45,971 cases are considered inactive, while 1,177 Knox County residents are currently COVID-positive.

36 COVID-positive Knox County residents are currently hospitalized with the virus, down two from yesterday and down from a peak of over 200 in January. This represents the lowest number hospitalized since October 1 (35). The total of county residents hospitalized at some point during the pandemic is now 1,278.

One additional death was reported yesterday, bringing the pandemic total to 545 for the county. Ten deaths have been reported in the first ten days of the month, a pace that would put the county roughly on place to match the deaths reported last July (34). The pace, however, seems to be slowing, so death totals could be more similar to September (27) or October (21).

The person who died today was between the ages of 65 and 74. We may be entering a phase of the pandemic in which fewer people in every age group are dying, but proportionately, more are dying at younger ages, due to the emphasis on vaccinating older citizens. For the month, more people below the age of 75 (6) have died from the illness in the county than those 75 and above (4).

The state is reporting a 7.8% positive test rate for Knox County. County vaccination numbers have not updated since yesterday and indicate that 113,904 shots have been given in the county. 72,536 (15.42%) of Knox County residents have been given at least one shot, while 41,026 have gotten two shots.

The number of active cases of the virus reported by the Knox County School system rose by three overnight to 73. It marks 15 days the active cases have remained between 50 and 100. 3,382 students and staff have recovered from the virus, while 868 remain in quarantine or isolation. This number has also stabilized, remaining between 500 and 1,000 for the last 15 days. Of the 868 currently in quarantine or isolation, 792 are students and 76 are staff members.

The University of Tennessee is reporting 37 active cases, down one from the previous day. Active cases have remained below 100 for over a month on the campus; since February 4. 2,976 students and staff have recovered from the virus, while 2 new cases were reported today. 267 students and staff are in quarantine or isolation. This number has also been stable, falling between 200 and 400 (404) every day since January 23. Of the 267, 35 are staff members, 139 are residential students, and 93 are non-residential students.

One additional cluster has been reported, involving a retreat activity in Townsend, which occurred on February 27, but was identified on March 6.