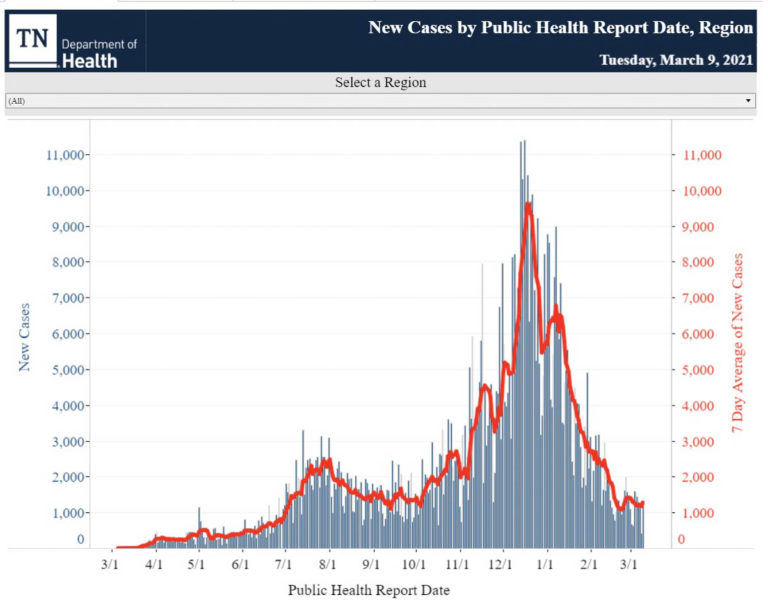 Well, Urban Boy turns six today. We celebrated with our little pod on Friday night, got outdoor, distanced presents from his dad’s mom on Sunday and will get presents in a parking garage from his parents today. It’s weird this year, but he doesn’t seem to mind. He got chocolate pancakes this morning while the Beatles sang “Birthday,” followed by having his name called out on the virtual announcements via the computer.

And he has a rash and has to go to the doctor on his birthday. And the water heater quit working this morning. Just another day in pandemic paradise.

After yesterday’s wonderfully low numbers, testing increased and, with it, so did case numbers. The state reported 1,338 new cases yesterday, bringing state totals to 655,788 confirmed cases and 129,554 probable cases. 760,910 cases are inactive, while 12,744 Tennesseans are currently COVID-positive. The number of active cases is the lowest since June 25 (12,187). New cases are averaging 1,272 per day in the state.

An additional 22 COVID-positive Tennesseans were hospitalized yesterday, bringing the pandemic total to 18,907. The number currently in the hospital rose by eight over the previous day to 721, while 205 are currently in ICUs (up ), and 117 are on ventilators (down 3).

Thirty-two COVID-19 related deaths were reported yesterday, bringing the total to 11,588. The seven-day average for deaths in the state is 22 per day.

Testing remains very low even when compared to post-holiday levels, but yesterday’s testing level (12,924) tripled the previous day level (4,048). The positive percentage for the day was reported at 7.29%. Johns Hopkins University reports the seven-day average positive test result rate for the state at 8.1%, though that may be impacted by a quirk in their data from yesterday.

1,690,179 shots of the various vaccines have been given in Tennessee, including 227,115 over the last seven days. The pace continues to run just below the 250,000 we maintained last week. 14.82% of state residents have been given at least one vaccination and the state reports 601,559 Tennesseans are fully vaccinated, an increase of about 14,400 over the previous day.

The Knox County Health Department is reporting 74 newly confirmed cases of COVID-19, up from 13 yesterday and more in line with the bump in testing reported at the state level. It brings the county’s totals to 40,450 confirmed cases and 7,346 probable cases. 46,218 are considered inactive, while 1,031 currently have an active case of the virus. The number of active cases is at its lowest since October 10 (993).

Thirty-nine COVID-positive Knox County residents are currently hospitalized, bringing the pandemic total to 1,279. Numbers have been in the thirties for the last three days. The numbers are comparable to late September of last year.

The state is reporting an 11.5% positive test rate for Knox County. Benchmarks, due to be updated today, had not been updated at the time of this publication.

The number of active cases of COVID-19 reported by the Knox County School system continues to edge upward, but remains in the 50-100 range where it has been for the last sixteen days. 75 active cases are reported, including 54 students and 21 staff members. 3,390 have recovered from the virus and 823 are in isolation or quarantine. The quarantine/isolation number has remained between 500 and 1,000 for the last sixteen days. Included in the current number are 746 students and 77 staff members.

An additional cluster was reported today, making three in the last eight days. This one comes at the Alpha Delta Pi House. Numbers have been updated on the pooled saliva testing and the results indicate further declines in participation in the “required” program, with just 50.8% participation, down from 56.1% the week before. Dr. Plowman has repeatedly said the university will take action against students who signed a contract to follow the protocol and yet have failed to do so.

Testing on campus has also dropped dramatically, 113 the most recent week reported. It had remained at about 200 per week for several weeks.