Dogwood Arts: Evolving and Learning Through a Pandemic 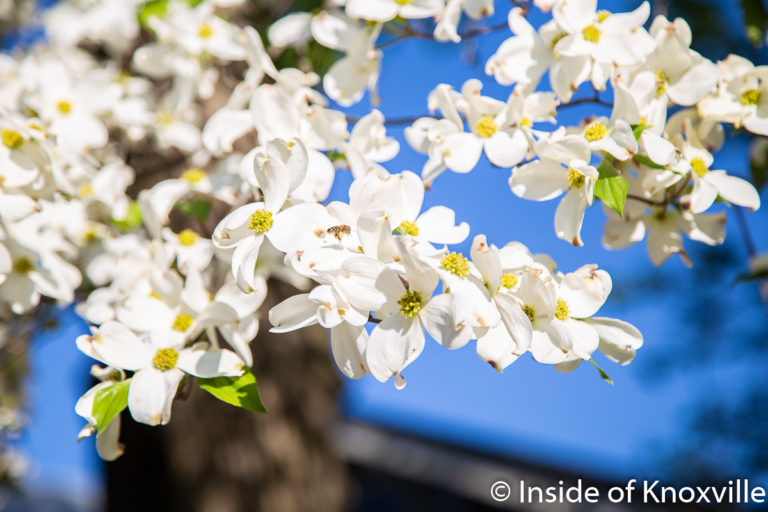 Flowers in Fort Sanders During the Pandemic, Knoxville, April 2020

I recently spoke with Sherry Jenkins, Executive Director of Dogwood Arts. I asked if she would take me through the last year at Dogwood Arts and speak to where the organization is after a year of unprecedented challenges.

“Everything shut down right before festival season and it was a gut punch,” she told me. She said they had moment of disbelief, pausing to understand all the ramifications of their plans which had suddenly been stopped with little notice. At first, like many of us, they felt the disruption would be short-lived. When it became obvious that was not the case, they had to work trough a short time of feeling helpless.

As they began taking stock, their thoughts turned to what they could do to help, feeling a need to invest their energy in a positive direction. The first step was obvious and straightforward: They had a large amount of hand sanitizer on hand and people needed that. They distributed what they had and their thoughts turned to the storehouse of art supplies they had accumulated.

Many of the supplies were for children and as they began thinking of distribution, they gathered kits and “Art Kits for Kids” was born. They packaged the supplies and delivered them to non-profit groups which were already distributing food and other goods. By early summer they had distributed about 3,700 art kits via organizations like the Change Center, Girls, Inc. in Anderson County and others.

They also seized the opportunity for an in-house redesign of the website led by Shannon Herron and Justin Keyes. Sherry said it had been years since the last update and the new website is much more attractive and easier to use.

They also realized some things could go on. The annual placement of sculptures was delayed due to the shutdown and the logistics of bringing the works to Knoxville, but they managed to place them by June, a couple of months behind the usual schedule. In the process they realized that the annual event might be better served in the summer as it doesn’t overlap all the other events. With the national interest in the project, it will now get the focus it deserves.

Funding was a serious concern, of course, and initial concern regarding sponsors turned to relief when the presenting sponsors honored their commitments even in the absence of the events they had agreed to sponsor. They pursued grants and other help provided under the Cares Act.

One particularly large grant seemed perfect for their new Art Kits for Kids program. Pressure was high as funding would be required to be used within six weeks of the grant and simply finding a vendor who could handle the massive order in that time frame was a challenge. Newell Brands, owners of Papermate, Sharpie and other brands, responded to an email request for help and committed working through the logistics to make it happen.

The grant was denied. Shortly after informing the company that there would be no grant forthcoming, the company requested a conference call. In the call they asked how much warehouse space Dogwood Arts could put together. Once donated space was secured, the company donated over $750,000 dollars worth of art supplies toward the art kits. The kits are currently being packed and will be distributed soon across Knox, Blount and Anderson Counties. Ms. Jenkins expects to distribute 10,000 kits.

This season, as always for the organization, started with the House and Garden Show. It is the largest fundraiser for the group and the event was held virtually this year. Complete with vendor specials, virtual sessions with experts, and more, the event was very successful, even if presented in a different format. Ms. Jenkins said the new website helped make the event technologically possible.

Through last spring they heard from many people who expressed gratitude for the Dogwood Trails, as that was something they could safely enjoy. Many said they had never driven the trails and the pause gave them the incentive. Those return this year, with a ribbon cutting set for April 1. Carefully planned featured gardens will be presented in a safe manner.

She said they may do a competition in the fall to keep area young people connected to the arts. They learned through last year’s digital chalk walk that people still wanted to be creative. The project was so successful, they will replicate it this year. They’ve lined up artists and have chalk kits for the first 500 participants who sign up. Simply the expansion of the number of people who can be involved made it very worthwhile. You can learn more here.

As they learned to manage virtual events, they feel they are ready to make the transition to safe in-person events. To that effect, the Dogwood Arts Festival will be held on the World’s Fair Park, April 23 – 25. The space is larger, there are about 70 invitation-only artists (reduced from 110 in 2019) and they will be widely spaced, and anyone wishing to attend will have to make a reservation through Eventbrite for the free event.

She said there will be a musical component, but there will be no crowds gathered shoulder-to-shoulder in front of a stage. Participants will be required to wear masks and the flow is designed to limit clusters of people. She said they have borrowed heavily from the experience of Nourish Knoxville and the Market Square Farmers’ Market, as well as Visit Knoxville and their Bassmaster Classic.

She said they’ve learned to be more flexible and to realize there is more than one way to accomplish their goals. “We love Market Square,” she said, indicated they hope to return there next year. “We hope to return to more in-person events, but they will be influenced by all we’ve learned over the last year.” “We feel grateful for where we are and realized we are in so much better shape than some others. We are grateful that we have something to show for our time. We have learned things that we can use to be better.”