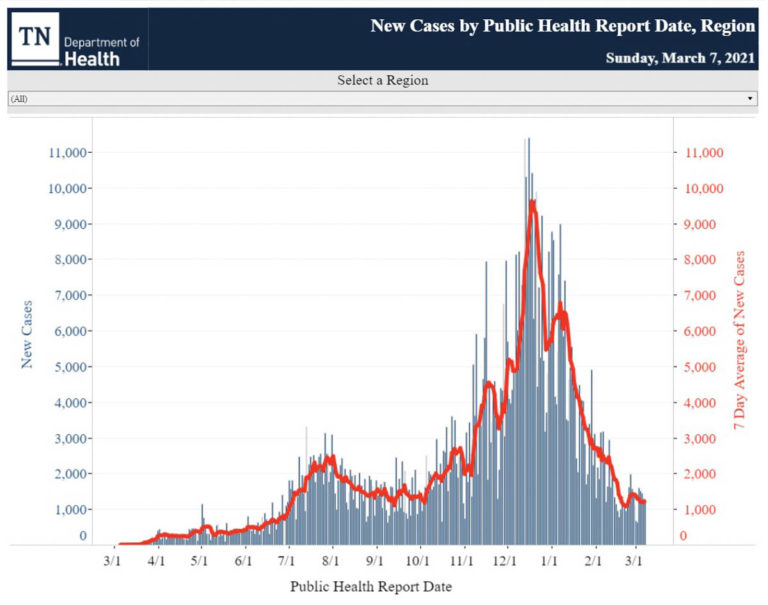 Welcome to another week. It promises to be a beautiful week in east Tennessee. Let’s hope the news is as pleasant. Unfortunately, there are signs at the international level that we may be losing our downward momentum with the virus. Please continue to do the work to keep the virus at bay in our city. We are at a hopeful point, but also a precarious one. Some are saying we are simply in the eye of the hurricane, with a large surge to come this spring. Let’s do everything we can to keep that from happening.

The most discouraging news at the international level is that the rate of new cases has reversed course and is rising, once more. 117.5 million cases of COVID-19 have been confirmed across the world, including about 2.8 million over the last week. The weekly increase is about 100,000 more than the week before. After weeks of declines in cases, the number of new cases has increased for two consecutive weeks.

The current seven-day average for new cases is 399,559 per day, up over 14,000 per day from the week before. Just over 93 million people have recovered from the virus, while just under 21.9 million people are currently COVID-positive. The number of active cases is nearly the same as a week ago. This follows three weeks of declines in the number.

Joining the list of international leaders who have tested positive for COVID-19 is President Bashar al-Assad of Syria. After two months out, students are returning to college and school classes in England. As Brazil sinks into a new dark phase in its COVID-19 battle, evidence is mounting that the Chinese produced CoronaVac is not effective at stopping the Amazon variant most prevalent there. In an effort to increase testing, Japan is offering COVID test kits through vending machines.

The U.S. has reported about 29.7 million cases of COVID-19, including over 418,000 in the past week. The weekly number reflects a drop from about 500,000 the previous two weeks. Over 23.3 million Americans have recovered from the illness, over 8.8 million are currently positive for the virus. The number of active cases has dropped about 200,000 from last week.

537,841 Americans have died of the virus, including 12,072 in the past seven days. The number of deaths declined by about 1,900 over the previous week. After a much slower decline the previous week (43), this week’s drop is more in line with what had been a relatively steep decline.

Yesterday, 41,967 new cases were reported in the U.S., along with 716 deaths. Relative to the previous week on the same day, there were about 7,400 fewer new cases and about 570 fewer deaths. New cases are now averaging 59,777 per day, down about 10,800 from the previous week. The current rate of new cases is similar to that of mid-October.

The U.S. is averaging 1,725 deaths per day from COVID-19. The number is down 264 from a week earlier. The number of deaths reported each day is similar to those reported in early December.

The U.S. continues to lead the world in cases (29.7 million to India’s 11.2 million) and deaths (537.8 thousand to 265.5 thousand). For the first time in months, the gap in deaths narrowed between the U.S. and Brazil, with about 1.5 thousand more deaths in Brazil than in the U.S. this week. Among countries with at least 1 million in population, the U.S. continues to rank third in the world in per capita cases behind Czechia and Slovenia.

Among the same group of more populous countries, the U.S. continues to rank seventh in per capita deaths from COVID-19. The U.S. ranks first in total testing, but ninth in per capita testing. The U.S. has slipped to fourth in percent totally vaccinated at 9.2%. The U.S. vaccination percentage is up from 7.5% a week earlier.

Yesterday, five states reported multiple thousands of new cases, down one from the same day the previous week. Thirteen states reported at least 1,000 new cases for the day, down two from the previous week. The same five states remained in the same order as last week atop the new case list: New York (6,788), Florida (4,098), Texas (2,870), California (2,846) and New Jersey (2,519). No states reported 100 or more deaths for the day, the first time that has happened in months. The same five states from last week remain at the top, though with the order shuffled a bit: California (99), New York (81), Virginia (77), Texas (75), and Florida (63).

The CDC released guidelines today for those who have been vaccinated. It’s complicated to say the least, and the guidelines have been delayed for days. Some experts are predicting a spring surge in cases for the U.S., fueled by the British variant. Spring break could also be a factor. Fueling this concern is the belief that states such as Mississippi and Texas, which removed their face mandates this week and are lifting other restrictions, are doing so too quickly. The U.S. Senate passed a COVID-19 relief package which now goes to the U.S. House.

758,039 cases are considered inactive, while 13,898 have an active case of the illness. Active case numbers, which dropped rapidly for weeks, stabilized this week, with today’s number up by 168 over the same day last week.

An additional 58 COVID-positive Tennesseans were admitted to the hospital yesterday, bringing the pandemic total to 18,837. The decline in currently hospitalized COVID-positive patients continues in the state, with 746 currently hospitalized, compared to 865 reported here on Friday. Numbers in the ICU and on ventilators also continue to drop, with 211 in ICUs (down from 254 reported Friday), and 121 on ventilators (down from 131 on Friday).

Since the last article, the state reported 33 deaths on Friday, 9 on Saturday and 4 on Sunday. The seven-day average has dropped to 20 deaths per day, half the number from a week ago. It is the lowest the average has dipped since October 21 (20). The four deaths reported on Sunday matches the four reported on February 15.

The state reported an average of about 17,000 tests per day over the weekend, with 14.1 thousand reported yesterday, bringing state totals closer to 6.9 million. The state reported a 6.13% positive test rate for the day. Johns Hopkins University is reporting a 9.2% positive rate for the state for the last seven days, but that spiked from 8.1%, which is probably more accurate. Someone appears to have entered the positive tests for Sunday, but not the total test, skewing the numbers.

The state reports 1,625,635 shots have been given in the state, with 249,220 given in the last seven days. The pace of vaccinations has remained stable for the last two weeks. If some of the additional shots currently being given are J&J, we should see a pick up in the pace of fully vaccinated state residents, since only one shot is required. It also complicates the math I’ve been doing for my projections, as I can’t calculate it the same way.

Regarding these reports, the most significant news is that the Knox County Health Department has dropped to one press briefing per week, which will take place on Thursdays.

Since Friday’s article, the Knox County Health Department has reported 69 new cases on Saturday, 77 new cases on Sunday, and 64 new cases today. The total is 34 more cases than reported the same days last week. The new cases bring county totals to 40,363 confirmed cases and 7,316 probable cases. 45,967 cases are considered inactive, while 1,168 Knox County residents are currently COVID-positive. Active case numbers are similar to those in mid-October.

As with last weekend, over the three-day period, only one death was reported and that this morning. The person who died was 75 years old or older.

The state is reporting an 8.5% positive test rate for the county, down from 11.7% a week ago. County vaccination numbers have been updated and indicate that 113,904 shots have been given in the county. 72,536 (15.42%) of Knox County residents have been given at least one shot, while 41,026 have gotten two shots. I’m waiting for a response from Knox County, but I think when the vaccination site says 72,536 have gotten one shot, it should say “at least” one shot. That would make the 41,026 a part of that group and not separate from it.

The metrics shifted from the previous day, with all remaining green except for custodial and substitute support, both of which switched from yellow to red. One school remains on virtual-only learning:

The biggest school news over the weekend, does not seem to have been reported elsewhere (that I’ve found). In an email to parents, school superintendent Bob Thomas said,

. . . KCS expects to continue offering in-person and virtual learning options in the 2021-22 academic year. We will be providing details soon about the timeframe for families to choose a learning option; the health-and-safety procedures that will be implemented in our school buildings next year; and updates about our virtual learning program.

As an editorial aside, I’ll say I was surprised by this for several reasons. First, it seems early to make a commitment one way or the other, since there is no current pressure. Second, with all state and local numbers improving, I would have expected the school system to hold out hope of a normal return if possible, without a virtual option. Finally, with legislation proceeding through our state capitol giving the governor authority to make this decision, and given his stated desire to open schools, this decision could easily be reversed by him, making this announcement premature, if not embarrassing.

The University of Tennessee is reporting 38 active cases of COVID-19, and 2,969 recoveries. 13 new cases were confirmed over the last three days. 227 are in quarantine or isolation, including 37 staff members, 111 are residential students, and 79 are non-residential students. No additional clusters were reported.