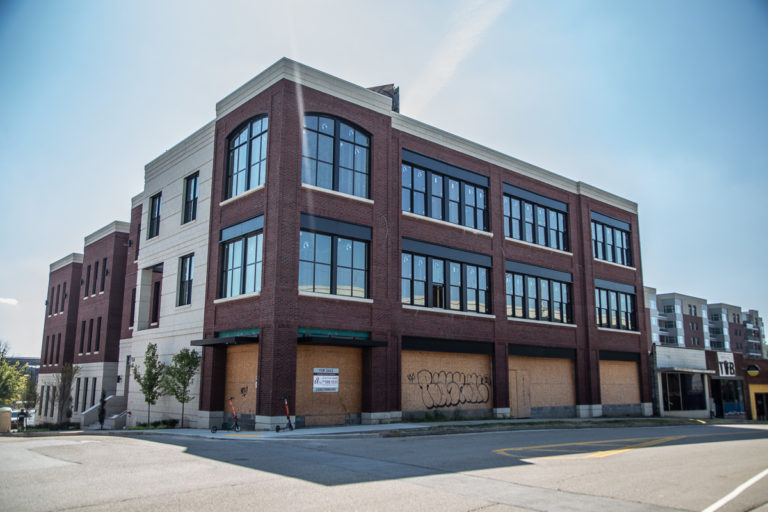 It’s been about eight months since my last update on Mews II. Since that report, brick has been added to the outside and a number of the units have been finished. Residents recently began moving in to the finished portions.

Built in phases, phase one includes six units, with two on each floor along the back of the building facing from Magnolia. Those units have been completed, with some minor finishes remaining in some. These units each have two bedrooms and three of them have two baths. Ranging from 748 square feet to 863 square feet, the upper floor units each include a balcony, all include twelve foot ceilings and high-end finishes. These units have now sold. They were priced in the mid-to-upper $200,000 range.

The second phase included the same number, size and price-point as phase one and is located in the center of the building looking from Magnolia. These units had an exposed brick wall. Priced similarly to the first phase, they have all sold, as well.

The final phase remains under construction and is the most ambitious, including eight residential and one or two retail spaces. The residential units offer a wider range in size. The smallest are three one-bedroom units with 620 square feet offered in the low $200,000 range. There are four two-bedroom homes ranging from 936 square feet to 1110 and from $297,000 to $385,000.

The largest unit in the entire development is two stories and overlooks the corner of Ogden and Magnolia. It includes 1770 square feet, three bedrooms, two baths and a larger balcony. It has gorgeous windows and was priced just under $500,000. Six of the phase three units remain available, including the largest.

The commercial space will be the last to be completed. Totaling 4,000 square feet, the space can be taken as a whole or divided into two parts. It is currently available for lease or purchase.

Jeffrey Nash and Juliana Terra said that the new residents represent a range of downtown purchasers, from locals wanting to live downtown to people from other places. One new resident is from New York and, upon retirement, explored affordable places to live nationally before deciding on Knoxville. Another came from Greece to work temporarily at UT and decided to make Knoxville a permanent home.

I included the photograph from the Gay Street Viaduct to show how the texture of downtown is changing. That photograph would have looked dramatically different two years ago prior to the construction of both Regas Square and Mews II. It’s also interesting to see how the billboard in the center of the construction has essentially disappeared unless viewed from the interstate.

Another question was answered for me as I toured. As we walked through the ongoing construction on the Magnolia side, the traffic from the Interstate was barely audible inside the cinder block and brick construction and that was without drywall and interior insulation. The construction very intentionally mitigated the impact of the noise and it worked.

There are only a few units remaining and they will likely be gone by the time the construction is completed on the final phase. The completion date is projected for later this fall. If you are interested in a residential or retail space, you can find additional information and a contact template on the website. You may also contact listing agent Kimberly Dixon Hamilton of Downtown Realty, Inc. at 1-865-588-5535.