An Update on the Mews II Development 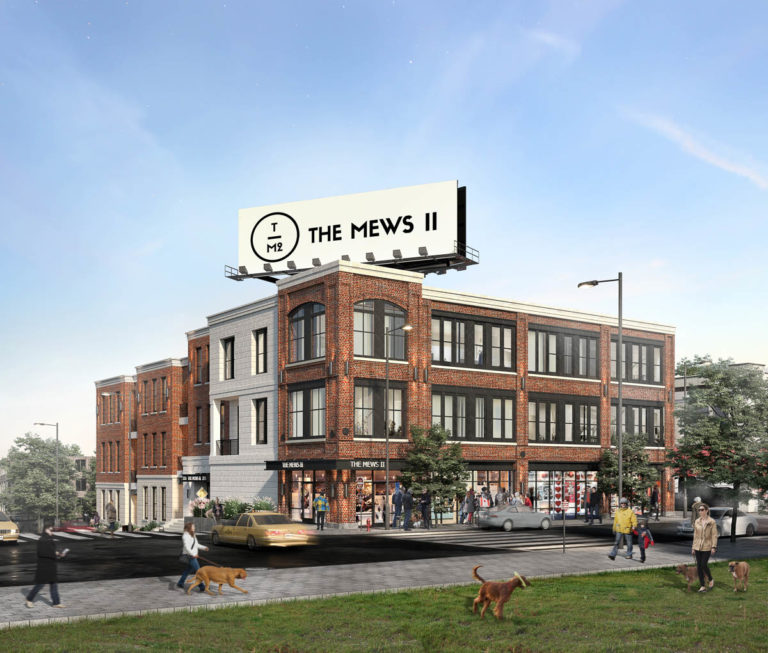 Mews II, a development by Jeffrey Nash and the Courtland Group, gives the appearance of rapidly rising toward completion. It’s instructive to note the the land was first purchased by Nash in June 2015, nearly four years ago. Plans were drawn and then changed when Marie’s Tavern was offered for sale and that spot was incorporated into the project. Details were first made public here in October 2017. I updated progress in May 2018.

That said, the project does seem to have moved along quickly since ground was broken. Despite various challenges, it has remained on schedule and is set to be completed next fall. A few changes have been made along the way, though very few for a project this large.

The decision was made to divide the project into three phases. Also, due to ADA regulations and the slope of the property, the front retail space along Magnolia Avenue is now offered as one or two spaces, not up to four as originally conceived. The available square footage for commercial development remains the same.

The first phase consists of six units along the rear of the building looking from Magnolia. Entrances for all of the units were placed along Ogden, “to retain Ogden as a residential street,” according to Mr. Nash. The rear and side of the building will be landscaped with brick pavers and plants and the far side of the building also includes a small outdoor community seating area.

The six units in phase one (units 101,102, 201, 202, 301 and 302) range in size from 748 square feet (the ’01 units facing Ogden to 863 square feet (the ’02 units on the other side of the building). All homes above ground level have a covered, concrete balcony providing dedicated outdoor space for the owners. Balcony sizes along Ogden are 64 square feet and are 32 square feet on the opposite side.

All units in phase one have two bedrooms and half have two baths. They also feature twelve foot+ ceilings and high-end finishes.  List prices on these units ranged from $235,000 to $280,000 and each of the six are currently under contract. The anticipated move-in date is July or August.

Entrances to each of the phases features wide stairwells with a split stairwell entrance to the units. All units include washer/dryer hookups and large windows along with premium finishes. All units have hardwood floors and extensive layers to mitigate outdoor sounds.

Phase two of the project includes the six units in the center portion of the building looking from front to back. They range in size from 736 square feet to 862 square feet and in price from $235,000 to $280,000 and have similar floor plans to the first phase units, with all having two bedrooms and half having two bathrooms. The upper two floors also have balconies like those in phase one and have exposed brick along one wall.

Two of these six units are under contract. The anticipated finish date for phase two is about two months later than that for phase one, placing the availability for occupancy around October.

Phase Three includes eight residential units which will soon be offered for sale and one or two (depending on the client) commercial spaces facing Magnolia. The residential units in this phase offer a wider range of square footage, starting at three units with just over 620 square feet one bedroom and one bath offered for $210,000.

Two units with two bedrooms and two bathrooms and 936 square feet are offered for $297,000. Another two have 1110 square feet and balconies, two bedrooms and two baths and come in at $350,000 and $385,000. This phase also includes what must be considered the crown jewel of the development, in a 1770 square foot, two story unit that includes three bedrooms, two bathrooms and a much larger balcony, offered for $495,000.

The final phase should be completed in late fall of this year. The 4,000 square feet of commercial space will be available for rental or purchase. You will find further information, including floor plans for each unit here. A contact template is included in the webpage. You may also contact listing agent Kimberly Dixon Hamilton of Downtown Realty, Inc. at 1-865-588-5535.