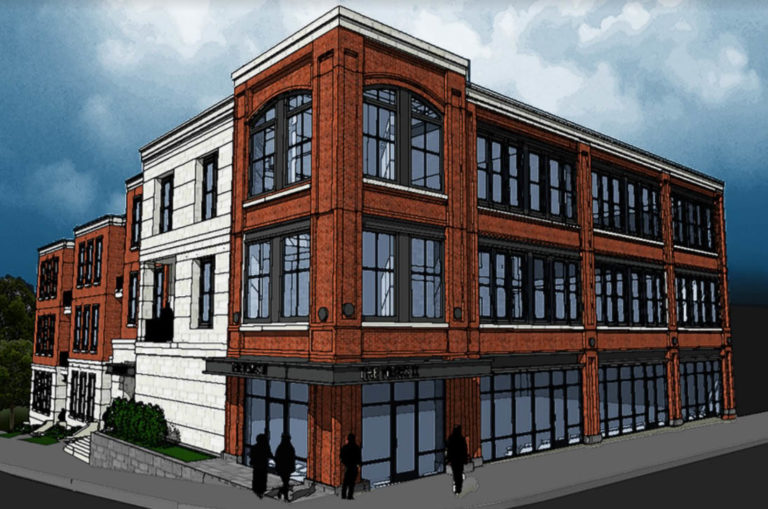 The Courtland Group, headed by Jeffrey Nash, has established an excellent track record with numerous redevelopments of older buildings. Nash began his career reclaiming and redeveloping warehouses and factories in east London, but moved to Knoxville nearly twenty years ago and has steadily built an impressive portfolio of redeveloped buildings here.

Best known, perhaps for reviving the building and opening the business that is the Crown and Goose, he’s also developed properties such as Keystone Place and most recently, the beautiful building housing the Patricia Nash Showroom on 6th Avenue. He’s currently restoring and improving the Hubris Building on the 100 block of Gay Street.

Arguably, his crown jewel to this point is the work he did on Magnolia, bringing back two severely run-down buildings and converting them into the headquarters for Hedstrom Design and for his Mews Condominium project. The ten units built in 2015 immediately sold and Nash describes it as one of the fastest sell-outs of a condominium project in Knoxville.

Until now the projects have all involved bringing new vitality to older buildings. Nash says in some respects that’s easier: the building dictates what may be done and the creativity involved is in getting the most from a static structure. As he moves into the second phase of the Mews (Mews II), that has all changed. He will soon begin ground-up construction on the corner lot which once included Marie’s Tavern.

Just across Ogden Street from The Mews, phase one, the new site presents some challenges which become immediately clear. Like many lots in Knoxville, this one includes a significant drop-off in elevation from front to back. Massive power poles and transformers sit on the site and, most conspicuously, a massive two-surface billboard sits in the middle of the lot. It might seem impossible.

Nash admits it has been a challenge to make the entrances from Ogden ADA compliant while accounting for the serious slope has been difficult. He’s working with the city to have the power poles and transformers buried. But then there’s that massive pole in the middle of the plot. Significant engineering resources have been brought to bear to determine how to build the new construction around the sign (which can’t be removed), hiding the pole, leaving it structurally sound and allowing the billboards to be seen from the Interstate which is, of course, why they are there.

Mews II, when completed will include 20 condos and 5,000 square feet of commercial space fronting Magnolia. The commercial space will be flexible and may represent two, three or four separate spaces depending on demand. The new businesses will join other successful business on that block of Magnolia.

Tennessee Valley Bikes has been on the block the longest, occupying a couple of different locations there for the last ten years. Public House sits at 212 W. Magnolia and the newest entry on the block, Magnolia Records next door is the most recent entrant on the block, having opened last spring.

The condos will trend toward the lower end of the downtown spectrum in price. One bedroom units will sell for around $200,000, while two bedroom units will range from under $240,000 to around $300,000. One two-story, three bedroom unit will be available at around $460,000. A courtyard is planned for the back side of the development, and each unit will have private balconies either overlooking Ogden Street or the courtyard.

Plans for the building have been approved and reviewed. The bidding process is underway and the estimated delivery time is about eighteen months. It promises, along with the first phase of the project and the looming addition of Regas Square to make that section of Gay Street, Depot and Magnolia a lively residential and commercial center for downtown.

Of course, there are other projects lined up, but we’ll save that for another day.