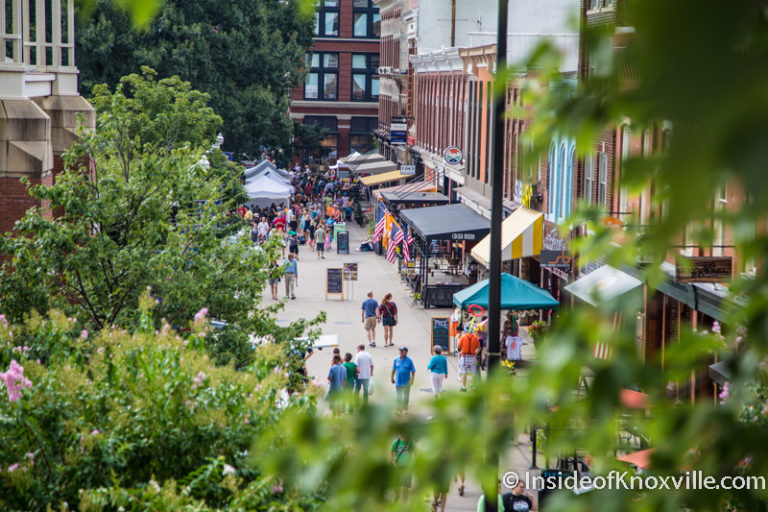 It would be an easy question for most people in the area: Where’s the heart of Knoxville? We know it’s a special place. It’s inspired quotes – though not always flattering – by some of America’s luminaries. It’s a subject of a book by Jack Neely and it’s been marveled at by generations.

Famously, thanks to Mr. Neely who revived the quote, in 1900, a writer for the Knoxville Journal and Constitution said, “Market Square is the most democratic place on earth. There the rich and the poor, the white and the black jostle each other in perfect equality, and the scenes during the busy hours of the afternoon are always worth watching.”

It’s certainly no less true today than it was then. An average day on Market Square will generally find homeless people, business owners, panhandlers and buskers, wealthy speculators and corporate executives, college students, children, office workers and more. Increasingly people of different races mingle in groups or as couples, people speaking different languages are less of a surprise and the sight of tourists attempting to navigate the area has become increasingly common.

And then there are the special days. I’ll bet you could name some of your favorites. Mine include small personal moments – a kiss at midnight on New Year’s Eve, witnessing marriage proposals on two different occasions, one between two very joyful women. Beautiful children playing in the fountains, happy people dancing to great music, favorite times with my family and friends at restaurants all around its edges. Coffee and people watching with Urban Woman. I remember a beautiful snowy night when I stepped out of Preservation Pub and momentarily had the square to myself. It goes on.

Then there are the big public events that seem to never end. Can there be a spot with more festivals? Is there a better farmers’ market than the Market Square Farmers’ Market? And how many free concerts have we enjoyed on that spot? Along with about 10,000 friends, I saw Steve Winwood play his Hammond B3, right there on that stage. What city not named New Orleans has better free jazz all summer? We have Shakespeare on the Square, Movies on Market Square, ice skating and the list goes on.

It comes as no surprise to us, then, that any group looking for the most special spots in the country might find our little square. As announced today, “the American Planning Association (APA) named Knoxville’s Market Square as one of five Great Public Spaces.” It’s an honor it has bestowed on five places in the United States each year for the last ten. The formal announcement and the awarding of the designation will happen this Friday on Market Square at 7:00 PM – just before the Movies on Market Square.

The award comes as, “APA’s Great Places in America launches National Community Planning Month and recognizes streets, neighborhoods, and public spaces in the United States demonstrating exceptional character, quality, and planning—attributes that enrich communities, facilitate economic growth, and inspire others around the country. The Great Neighborhoods, Great Streets, and Great Public Spaces of 2017 are places that are unique and exemplary in their amenities and infrastructure, cultural identity, and use of sustainable and innovative practices.”

It’s hard to imagine a place that more embodies the characteristics noted above. We certainly have the character and quality and it’s pretty unique, though there are similar places around the country. We got a bit lucky on the planning part and maybe our “amenities and infrastructure,” haven’t always been as great on the square as they are today, but that’s all the more reason to celebrate the fact that we live in this time and have the gift of being able to enjoy this special spot.

The APA describes our heart, thusly:

Located in the heart of downtown Knoxville, Market Square is a testament to the effectiveness of community-driven planning and how a diversity of uses and historic preservation can work together to revitalize an area. The Square is deeply rooted in the history of Knoxville and, despite a devastating fire and multiple economic downturns, continues to flourish today. The mix of these distinctive buildings with the activity taking place in the Square truly makes it Knoxville’s front yard.

You might also remember that APA named a ten block section of Gay Street as one of America’s Great Streets back in 2012. It seems we are squarely on their radar and that of many other groups, as well as increasing numbers of guests who are traveling to the city. It’s interesting to consider other spots in the city and how we might make them just as special. That’s our challenge as we go forward.

To learn more about this year’s Great Places and previous designees, visit www.planning.org/greatplaces.