Have You Seen This? 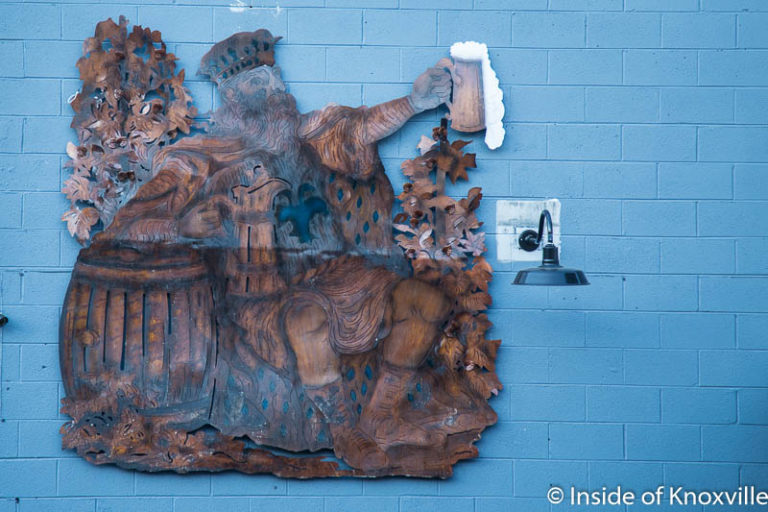 There’s such an accumulation of little changes around downtown it’s virtually impossible to notice, let alone document, them all. Some are very big and others are more like small details that make the city a bit better. Some change the shape of the city while others simply make it richer while we aren’t watching. Let’s look at some of the details, large and small that are changing the city and making it more interesting as we go.

I don’t intend these to be in any particular order, but I’ll start with the metalwork attached to the end of Merchants of Beer. It’s a cool touch by Cooper Customs (Tommy Cooper) which no one would have expected or noticed if nothing was done on that end of the structure, but it makes it a little cooler. Well done.

The city has improved several intersections in a pretty cool way, as well. Gay at Clinch, at Church and Cumberland have gotten a facelift as part of the work on the 700 block of Gay and it’s attractive and interesting. I watched some of the process which involves what looks like large square of roofing shingle (but that may not be what it is at all) being pressed by a large machine into shapes that resemble bricks.

It sounds like it would look incredibly fake, but it doesn’t. It looks like brick and I love the contrasting colors and angles. The cross walks feel safer, to me, then there’s a contrast. I think drivers notice it more quickly. It is purportedly more durable and cost-effective, avoiding the loose bricks we’ve dealt with in the streets for years. I wasn’t excited until I saw the finished product and I was more sold. If they really prove as durable as advertised, I’ll be a definite fan.

Of course, there’s a lot of construction around town and I’ve included pictures here of some of the most prominent projects. A friend posted recently to FB and asked something like, “What’s up with that big hole downtown?” I replied, “Which hole,” before learning she was referencing another city. We’ve had several holes in the city recently, but they are quickly filling and shooting upwards.

The Church Street United Methodist Project was one of the more recent to get underway, but it is also a smaller project than the others and should rapidly move toward completion. It will be interesting to see the face of such an architectural icon of downtown altered pretty dramatically.

The Courtyard and Residence Inn by Marriott at the corner of Church and State has come out of the ground and the lowest level is defined. It’s interesting to see the crane coming out of the center of the project. Similarly, the Regas Square Project (I couldn’t find my most recent photos, so I borrowed one from their FB page is ready to start adding floors, with the pilings in place. These two project seem to be pacing each other, with the Marriott project slightly ahead.

The Crozier in the Old City has really taken off. The elevator shaft and structures for stairwells are prominently displayed at this point and the building has not only filled its hole, but has risen two floors above grade. It will begin the modern redefinition of that part of the Old City. The Tombras Building (AKA KUB Building) is taking shape and the openings for the new windows are bringing its new design into focus.

We also have the beginnings of a new prayer garden. It replaced two nearly hundred-year-old buildings and it took five years to appear. For those of you who may have joined us in the last five years, here’s the article I wrote when the buildings were destroyed. It gives a pretty complete version of the story of how Saint John’s Cathedral chose demolition over every reasonable alternative while insisting it was necessary. Five years later we have a prayer garden.

In happier news, color is being splashed in every direction. We’re acting like we’re proud of this place or something! The Knoxville Music History Mural is restored and completed and has a couple of subtle additions. It seriously looks better than ever. Out in that area, another mural has been completed on the side of the A&B Distributors Building just a bit further out Jackson/McCalla in the warehouse district.

The Harry McClintock Mural sponsored by Scripps and Keep Knoxville Beautiful should be finished by the time you read this. I photographed it late yesterday and it was very close. It brightens up what had been a bit of a dusty corner just off Broadway and Central. Finally, Stong Alley (also often called the Art Alley) between Market Square and Gay Street has gotten a very nice upgrade with new paving, a stamped brick path through the middle and lighting.

Get out and explore. Check these out and see what else you find. There’s always something surprising.