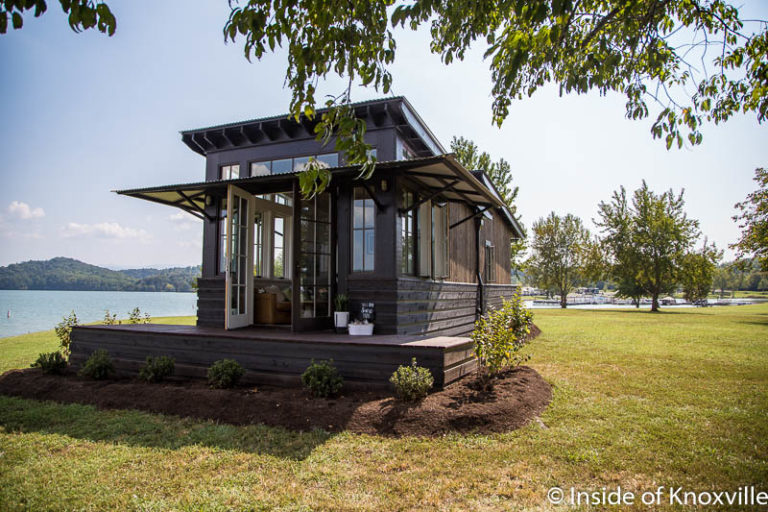 I’ve been thinking about tiny homes for a while. Not that I’m quite ready to move into one. Most people put the line between a tiny house and a “small” house at around 400 square feet. Below that you have a tiny house and above that you have a small house up to about 1000 square feet. My first was about 760, so I guess I was into the small house movement before it was cool.

HGTV recently had one on the Market Square stage. The interior reminded me of a nice travel trailer. A ladder slid out for climbing access to the bed which was situated above the living space. The ceiling sat about three feet above the bed, so it seemed prudent for any future resident to not be startled out of their sleep. The fact that it sat, as many do, on wheels made it seem less like a permanent stationary home.

They are also built to a different set of codes than permanent housing. They aren’t intended to meet residential building codes. That can be a problem if they are parked long-term in a residential area. That’s a bit of a conundrum in terms of urban infill and increasing residential density for which they offer great potential. It’s what I’d been considering, thinking of vacant urban lots locally that could hold multiple tiny homes.

NPR ran a story a couple of years ago about a tiny home community that sprung up in Washington, DC. The idea was to find otherwise unusable slivers of land and slip a small tiny home community into the spot. The homes could be legally parked there, but couldn’t be lived in because of their location and the fact that they were on wheels and didn’t meet city codes for permanent housing.

Locally, Knoxville allows for tiny homes, but has very specific rules about square footage per person, ceiling height, stairwell specifications and more. A group has explored making a tiny home community off Western Avenue and another has lots for sale in Thorn Hill, Tennessee, about an hour from Knoxville. We also boast the headquarters of Clayton Homes who are one of the national leaders in tiny home construction.

A group in New Orleans is attempting to build what might be affordable housing (some tiny homes may be purchased for as little as $20,000 to $25,000 in slivers of land developers would pass up. While creative, their homes are not always inexpensive and are more small houses rather than tiny homes. Portland, Oregon, perhaps not surprisingly, has a significant following for tiny homes, primarily for ecological reasons.

With all this on my mind, I was intrigued when I was offered the chance to see a staging of one of Clayton’s designer models, the Saltbox. Intended to be placed on foundations – they don’t come with wheels – these models are intended to meet all typical codes a city like Knoxville might have in place for residential dwellings.

The home was set up on Tellico Lake, a setting which may be more typical for placement of a tiny home. Often they are used as a secondary residence and may be placed in a getaway spot. I was curious how I might feel about the practicality of living in one. Of course, I’d have to imagine it in an urban environment, though sitting at the edge of the lake definitely added to the appeal.

The first thing that struck me was the covered front and back porches. With limited interior space (this one runs 452 square feet), an outdoor space really helps. Two other features obvious from the exterior promised relief from the small size: elevated ceilings and lots of windows, including elevated windows on the front end. The ceilings are 9.5 feet and the front double doors are French doors to allow more light. The promo material touts 270° views.

While the exterior with a seam metal roof and wood siding is attractive, the interior was at least, if not more appealing. A living area provided enough space for two chairs and a couch, as well as a coffee and a lamp table. The kitchen had enough room for a table advertised to seat six. It’s strange: I’ve been in 970 square foot condos in downtown Knoxville that did not offer room for a kitchen table. It’s very well laid out.

The kitchen has a smaller-than-conventional oven with four gas burners, dishwasher, refrigerator (not full size, but as large as ours downtown), quartz counter tops and a single sink. Cabinet space is a bit limited, but the kitchen does not feel like a kitchen in a travel trailer.

I was surprised to find a full bathroom with tub and the bedroom, while small did feature those 9.5 foot ceilings, windows and a French door offering floor to ceiling light and a back porch. It also had two small closets. The floors and ceilings throughout are hardwood. It was an interesting design choice that made the whole structure feel more solid.

The designer of this model was, “Jeffrey Dungan, world-renowned architect of Birmingham, Alabama.” It is designed with the vacation home crowd in mind and, particularly, the higher end of that market. Far from feeling rough, the home feels perfectly luxurious. It carries a price-tag of around $100,000.

The home is also designed to be environmentally sensitive. Simply by virtue of its size, its construction and power usage require less environmental impact. It has energy-efficient windows, tankless water heater and an, “optional 1,000 gallon above-ground cistern to harvest rainwater. They also offer, “the tiny homes meet international residential building code, which means it is built to local and state building code. This code allows us to place our tiny homes anywhere.”

This model is one of several in the luxury line and Clayton makes lower-priced tiny homes, as well. So, what do you think? Could you live in a tiny home? Is it a good choice for urban infill? It’s interesting to consider as we ponder sustainability, minimalist lifestyles, urban infill and affordable housing.