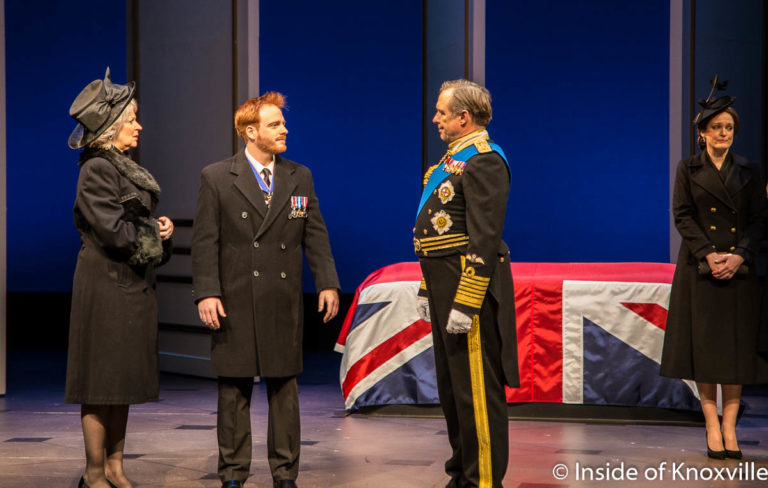 Clarence Brown Theatre’s current production, which opened last night, explores a circumstance which many who follow the British monarchy have long imagined: How might a reign by Prince Charles take shape. When Queen Elizabeth dies and Charles, presumably assumes the throne, how will he be viewed? Will he remain a ceremonial figure like recent Queens and Kings of England?

The play, written by Mike Bartlett was first produced in London in 2014 and has had successful runs in both London and New York City. In 2017 a film version was shown on BBC television. Presented as a “Shakespearean-like play,” it has also been presented by the Shakespeare Theatre Company in Washington, D.C.

The play begins at the funeral of Elizabeth and find Charles (Kurt Rhoads) struggling with what it means to be King of England in modern times. Camilla (Nance Williamson) is as delighted for him to be king as he is troubled. The first test of his reign comes before the official coronation with the presentation of a parliamentary bill which, like all other bills, is to be ceremoniously signed by the current monarch.

This particular bill brings into focus the issue of the freedom of the press. The Prime Minister (Michael Elich) insists that the bill is necessary to protect privacy from an intrusive press. He is shocked when Charles refuses to sign out of conscience. He reminds him, not so delicately, that the intrusion of the press resulted in tabloid headlines about, and ultimately, the death of Diana, Duchess of Wales.

The choice of this particular issue to be presented in the play makes it timely in an era that the press is regularly excoriated as biased, fake and destructive in our own country. While it seems intentionally focused on current events, the play was written and produced well before our current contentious debates over the freedom, objectivity and accuracy of the press.

An additional layer is woven through the play in the person of Prince Harry (Collin Andrews) who struggles in his own way with his place in the royal family. Not particularly fond of the trappings of the monarchy to which he must attend, he pursues a lifestyle not approved by the staid family. When he encounters Jess (Brenda Orellana), he finds a group that actively opposes the trappings of royalty and wants the monarchy abolished.

The sets are simple, yet regal. The parts are performed with such authority that it is easy to be brought into the inner workings of a family that few of us can imagine. Kurt Rhoads is a pitch-perfect Charles, while Collin Andrews could easily pass for Prince Harry.

Whether interested in the mythology of the royal family or concerned about current issues of the freedom of the press, audiences will easily find something to appreciate in the current production. Director John Sipes will present a pre-show discussion tonight in the lab theatre from 6:30 to 7:00, focusing on the Shakespearean elements of the production. Tomorrow night is the official opening night and the actors will be available after the production.

For tickets to the play, click here. The production will run through February 24.