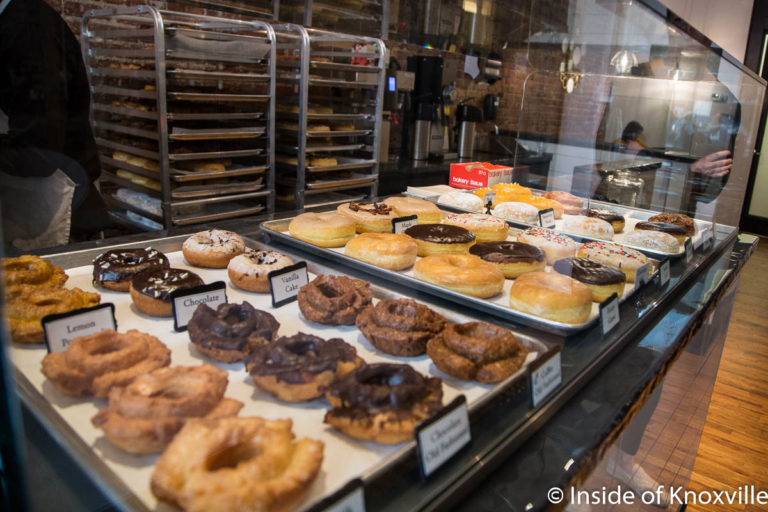 When I wrote the original article, Jimmy Wooten said he hoped to open the downtown store at 418 South Gay Street in January. They missed it by a day. Jimmy told me that after a hectic week doing last minute finishes, they decided to throw the doors open on First Friday and make it a soft opening.

Response has been good. Friday night was very busy and when I stopped in Saturday for coffee and doughnuts they were busy. What I didn’t know was that Urban Woman had slipped in before me to buy a dozen to share at Union Avenue Books. The confections got thumbs up all around and I’ve been back since.

I spoke briefly with co-owner Karen Wooten who says they are already noticing a difference between the downtown customers and their Bearden customers. It seems downtowners don’t have a cut-off for coffee drinking and they are selling more coffee than they’d expected. It appears that out west coffee sales slow after about 3:00 PM. They’ve upped their coffee orders.

The new shop is a very much re-imagined version of the Downtown Grind which occupied the spot previously. You’ll find significantly more seating on the front side and a bit added to the back side with a re-positioned and much smaller bar. Outdoor seating should appear in the spring.

What you’ll find behind the counter is lots of delicious. I’m stuck on the coffee classic (the specific name evades me), but I need to branch out soon. Urban Boy prefers the sprinkle. I’ll have to shift around soon.

They serve Intelligentsia coffee and the $4 coffee/doughnut combination is a good way to go. You’ll also find a full range of coffee drinks as well as hot tea, hot chocolate, orange juice, milk and Lemonade. I’ve talked to people who are excited about the coffee and others who are doughnuts all the way, but it’s hard to beat a coffee and a doughnut.

They are located in the Phoenix Building between Maple Hall and Phoenix Pharmacy and Fountain.